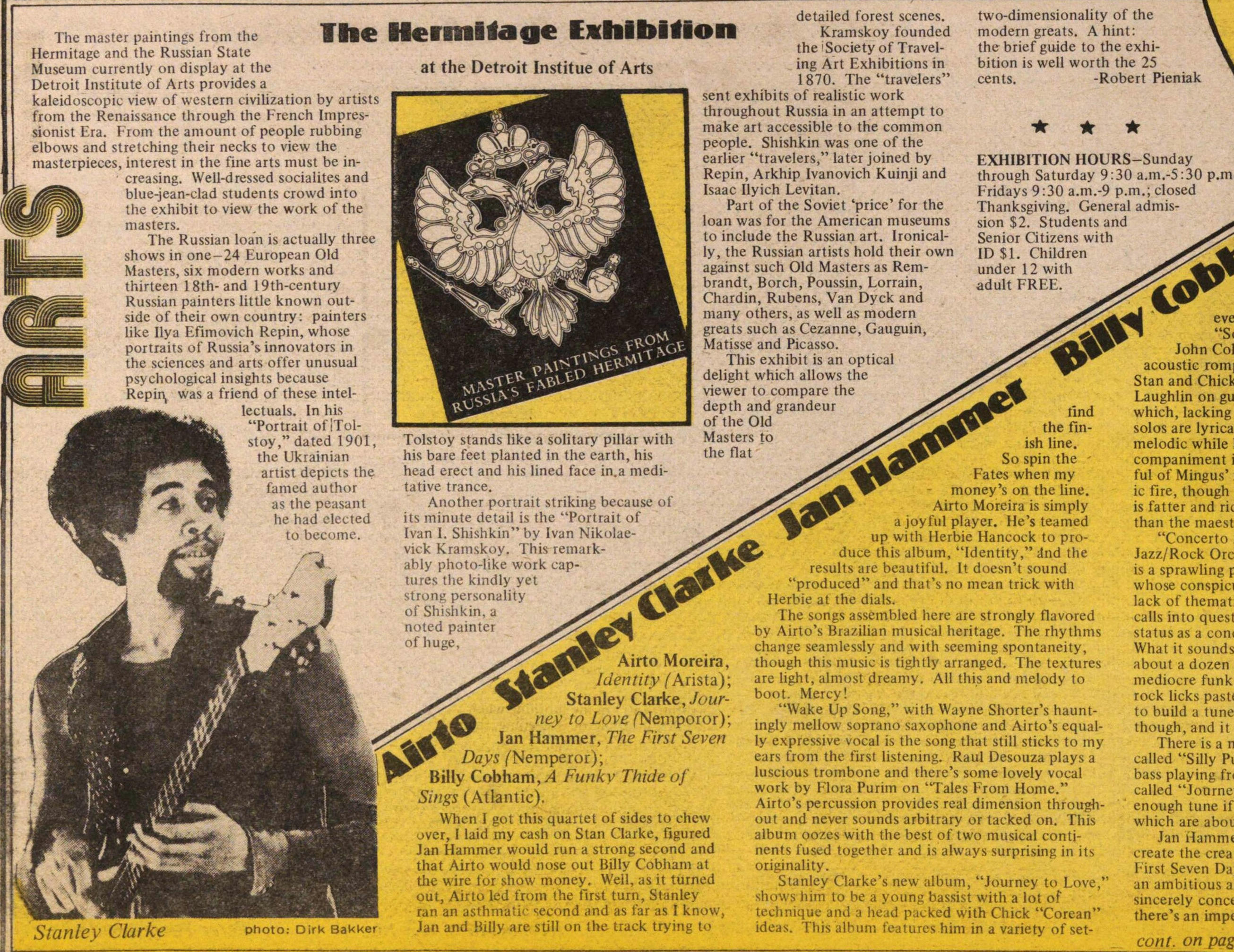 at the Detroit Institue of Arts The masler paintings from the Hermitage and the Russian State Museum euirently on display at the Detroit Institute of Arts provides a kaleidoscopic view of western civilization by artists from the Renaissance through the Frcnch Impressionist Era. From the amount ot'people rubbing elbows and stretching their necks to view the masterDieces. interest in the fine arts must be creasing. Well-d ressed socialites and blue-jean-clad students crowd into the exhibit to view the work of the masters. The Russian loan is actually three shows in one-24 European Old Masters, six modern works and thirteen 18th-and 19th-century Russian paintcrs little known outside of their own country: painters like Ilya Efïmovich Repin, whose portraits of Russia's innovators in the sciences and arts offer unusuaJ psychological insights because Repin was a friend of these lectuals. In his "Portrait of iTolstoy,"dated 1901, the Ukrainian artist depicts the famed author as the peasant he had elected to become. Tolstoy stands like a solitary pillar with his bare feet planted in the earth, his head erect and his lined face in. a meditative trance. Anothcr portrait strikini! because of ils minute detail is the "Portrait of Ivan I. Shishkin" by Ivan Nikolaevick Kramskoy. '1 lus remark.ably photo-like work captures the kindly vet . strong personality of Shishkin, a noted painter of huge, detailed forest scènes. Kramskoy founded the 'Society of Travelng Art Exhibitions in 1870. The "travelers" sent exhibits of realisüc work throughout Russia in an attempt to make art accessible to the common people. Shishkin was one of the earlier "travelers," later joined by Repin, Arkhip Ivanovich Kuinji and Isaac Ilyich Levitan. Part of the Soviet 'pricc' for the loan was for the American museums to include the Russian art. Ironically, the Russian artists hold their own against such Old Masters as Rembrandt, Borch, Poussin, Lorrain, Chardin, Rubens, Van Dyck and many others, as well as modern greats such as Cezanne, Gauguin, Matisse and Picasso. This exhibit is an optical delight which allows the viewer to compare the depth and grandeur of the Old Masters to the flat - two-dimensionality of the modern greats. A hint: the brief guide to the exhi bition is well worth the 25 cents. -Robert Pieniak EXHIBITION HOURS-Sunday through Saturday 9:30 a.m.-5:30 p.m Fridays 9:30 a.m.-9 p.m.; closed Thanicsgiving. General admission $2. Students and _ Senior Otizens with ID $1. Children under 12 with adult FREE.