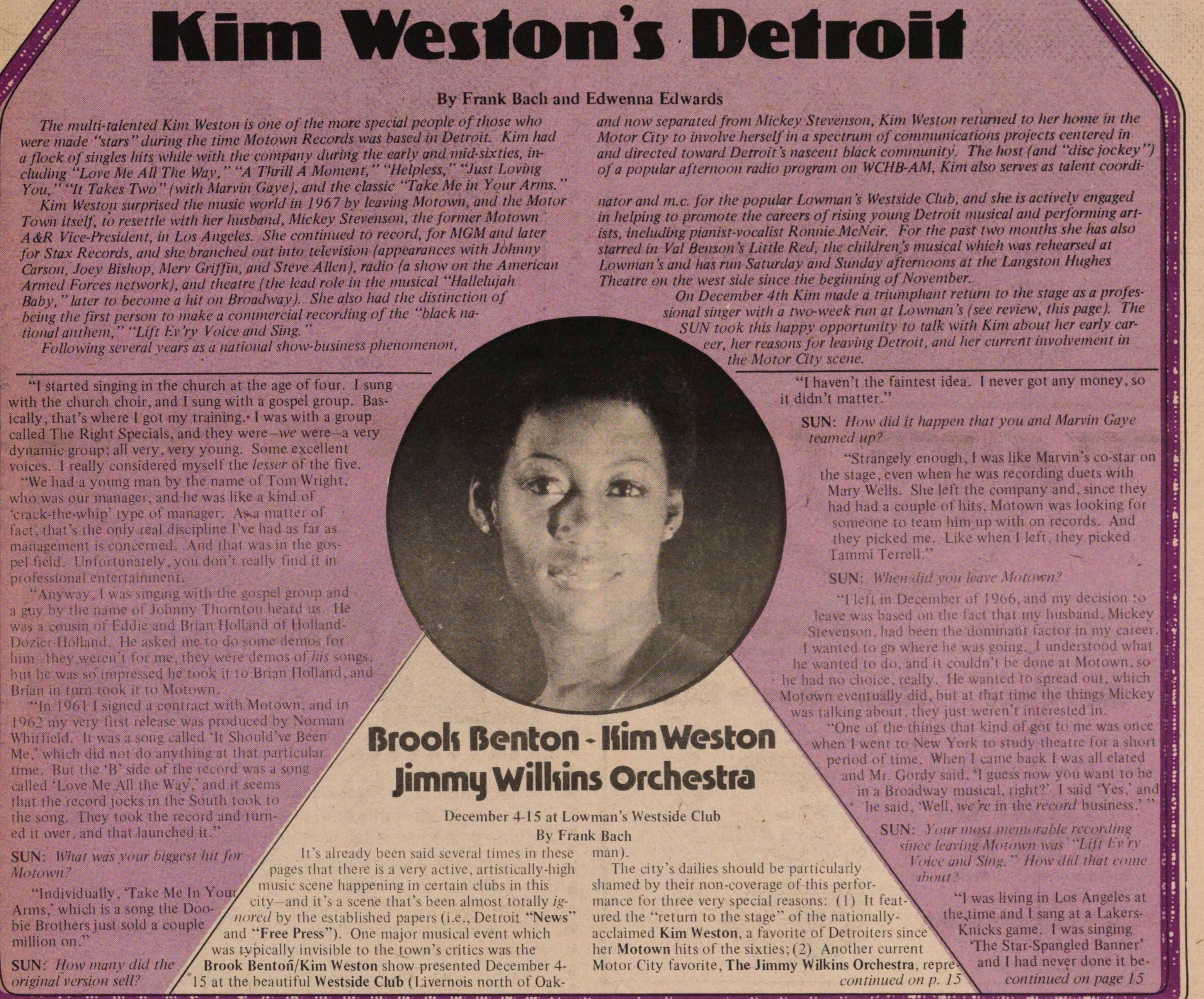 The multi-talented Kim Weston is one of the more special people of those who were made "stars" during the time Motown Records was based in Detroit. Kim had a flock of singles hits While with the company during the early and mid-sixties, including "Love Me All The War, "  "A Thrill  A Moment,"  "Helpless, "  "Just Loving You, "  "It Takes Two " (with Marvin Gave), and the classic "Take Me in Your Arms. " Kim Weston surprised the music world in 1967 by leaving Motown, and the Motor Town itself, t'o resettle with her husband, Mickey Stevenson, the former Motown A&R Vice-President, in Los Angeles. She continued to record, for MGM and later for Stax Records, and she branched out into television (appearances with Johnny Carson, Joey Bishop, Merv Griffin, and Steve Allen), radio (a show on the American Armed Forces network), and theatre (the lead role in the musical "Hallelujah Baby, "later to become a hit on Broadway). She also had the distinction of being the first person to make a commercial recording of the "black national anthem, " "Lift Ev 'ry Voice and Sing.
Following several years as a national show-business phenomenon, and now separated from Mickey Stevenson, Kim Weston returned to her home in the Motor City to involve herself in a spectrum of Communications projects centered in and directed toward Detroit's nascent black community. The host (and "disc jockey") of a popular afternoon radio program on WCHB-AM, Kim also serves as talent coordinator and m.c. for the popular Lowman 's Westside Club, and she is actively engaged in helping to promote the career of rising young Detroit musical and performing artists, including pianist-vocalist Ronnie McNeir. For the past two months she has also starred in Val Benson's Little Red, the children's musical which was rehearsed at Lowman 's and has run Saturday and Sunday afternoons at the Langston Hughes Theatre on the west side since the beginning of November.
On December 4th Kim made a triumphant return to me stage as a professional singer with a two-week run at Lowman 's (see review, this page). The SUN took this happy opportunity to talk with Kim about her early career, her reason for leaving Detroit, and her current involvement in the Motor City scene.

"I started singing in the church at the age of four. I sung with the church choir, and I sung with a gospel group. Basically, that's where I got my training. I was with a group called The Right Specials, and they were -we were -a very dynamic group; all very, very young. Some excellent voices. I really consídered myself the lesser of the five.
"We had a young man by the name of Tom Wright, who was our manager, and he was like a kínd of 'crack-the-whip' type of manager. As a matter of fact.that's the only real discipline I've had as far as management is concerned.And that was in the Gospel field. Unfortunately, you don't really find it in professional entertainment.
"Anyway, I was singing with the gospel group and a guy by the name of Johnny Thornton heard us. He was a cousin of Eddie and Brian Holland of Holland - Dozier- Holland. He asked me to do some demos of his songs, but he was in turn took it to Motown.
"In 1961 I signed a contract with Motown, and in 1962 my very first release was produced by Norman Whitfield. It was a song called 'It Should've Been Me",which did not do anything at that particular time.But the 'B' side of the record was a song called 'Love Me All The Way', and it seems the the record jocks in the South took to the song. They took the record and turned it over, and that launched it."

SUN:What was the biggest hit for Motown?

"Individually, Take Me In Your, Arms." which is a song that the Doobie Brothers just sold a couple million on."

SUN: How many did the original version sell?

"I haven't the faintest idea. I never got any money, so it didn't matter."

SUN: How did it happen that you and Marvin Gave teamed up'?

"Strangely enough, I was like Marvin's co-star on the stage, even when he was recording duets with Mary Wells. She lef't the company and, since they had had a couple of hits, Motown was looking for someone to team him up with on records. And they picked me. Like when I left, they picked Tammi Terrell."

SUN: When did you leave Motown?

"I left in December of 1966, and my decision to leave was based on the fact that my husband, Mickey Stevenson, had been the dominant factor in my career. I wanted to go where he was going. I understood what he wanted to do, and it couldn't be done at Motown, so he had no choice, really.
He wanted to spread out, which Motown eventually did, but at the time the things Mickey was talking about, they just weren't interested in.
"One of the things that kinda got to me was once when I went to New York to study theatre for a short period of time. When I came back i was all elated and Mr. Gordy said, 'I guess now you want to be in a Broadway musical, right?'  I said ''Yes," and he said, "Well. we're in the record business.' "

SUN: Your most memorable recording since leaving Motown was "Lift Ev 'ry Voice and Sing." How did that come about?

I was living in Los Angelesat the time and I sang at a Lakers-Knicks game. I was singing 'The Star-Spangled Banner' and i had never done it be-

It's already been said several times in these pages that there is a very active, artistically-high music scene happening in certain club in this city - and it's a scene that's been almost totally ignored by the established papers (i.e., Detroit "News"and "Free Press"). One major musical event which was typically invisible to the town's critics was the Brook Bento/ Kim Weston show presented December 4-15 at the beautiful Westside Club (Livernois north of Oakman).
The city's dailies should be particullary shamed by their non-coverage of this performance for three very special reasons:

The show we checked out Saturday, December 13 opened with Kim introducing the extremely competent Jimmy Wilkins organization. They played two numbers of their own (we didn't catch titles) to start things off; quickly establishing that their regular activity as the city's foremost "big band" has created a unit as solid as, say, the fabled Count Basie Orchestra.
Kim Weston's portion of the show followed,with Kim offering a smooth, yet exciting version of "Feel Like Makin' Love," which turned out tobe only a warm--up for the fast-paced "Detroit," the lyrics of which are printed here.
At this point the show rapidly seemed to become "politicized" - starting with Kim's rap in the middle of "Detroit" which praised her beloved "beautiful people of this city" and favorably mentioned "our new administration in city hall."
She apparently had the support of the audience in all this (they joined in singing the chorus of "Detroit") and when she began her closing tune - the anthem "Lift Ev'ry Voice and Sing" -everyone, almost to a person, stood in respect. To this reviewer the vision of an entire nightclub crowd on its feet, with hands-in-the-air salutes, turned out to be only the first surprising sight involving the crowd that night. Our only complaint was that Kim's set was over all too soon.
Ms Weston's rousing, positive energy proved to be the perfect complement to the suave self-confidence other silky standards with a cool professionalism that called to mind the best of Billy Eckstein, Nat King Cole, or even Frank Sinatra. Mr. Benton seemed too easily manipulate several female members of the audience into a state of frenzy, simple with his voice and sexy on-stage "karma" - to the point that, during "Midnight Train to Georgia," a security guard and Chuck Lowman himself had to come on stage to, uh, kiss him. Have mercy.
They certainly do get down at Lowman's, and it's too bad more of Detroit's music critics don't get  down there too. This particular show had such a variety of interest, from the contemporary spirit of Kim Weston to the exquisite charm of Brook Benton, it would seem to appeal to just about any (or all) of the local scribes - that is to say, if they don't mind a black-owned and operated club with largely black clientele.
We don't mind one bit, if that isn't already obvious. In fact, with this kind of entertainment, we'd have to say we like it very much.