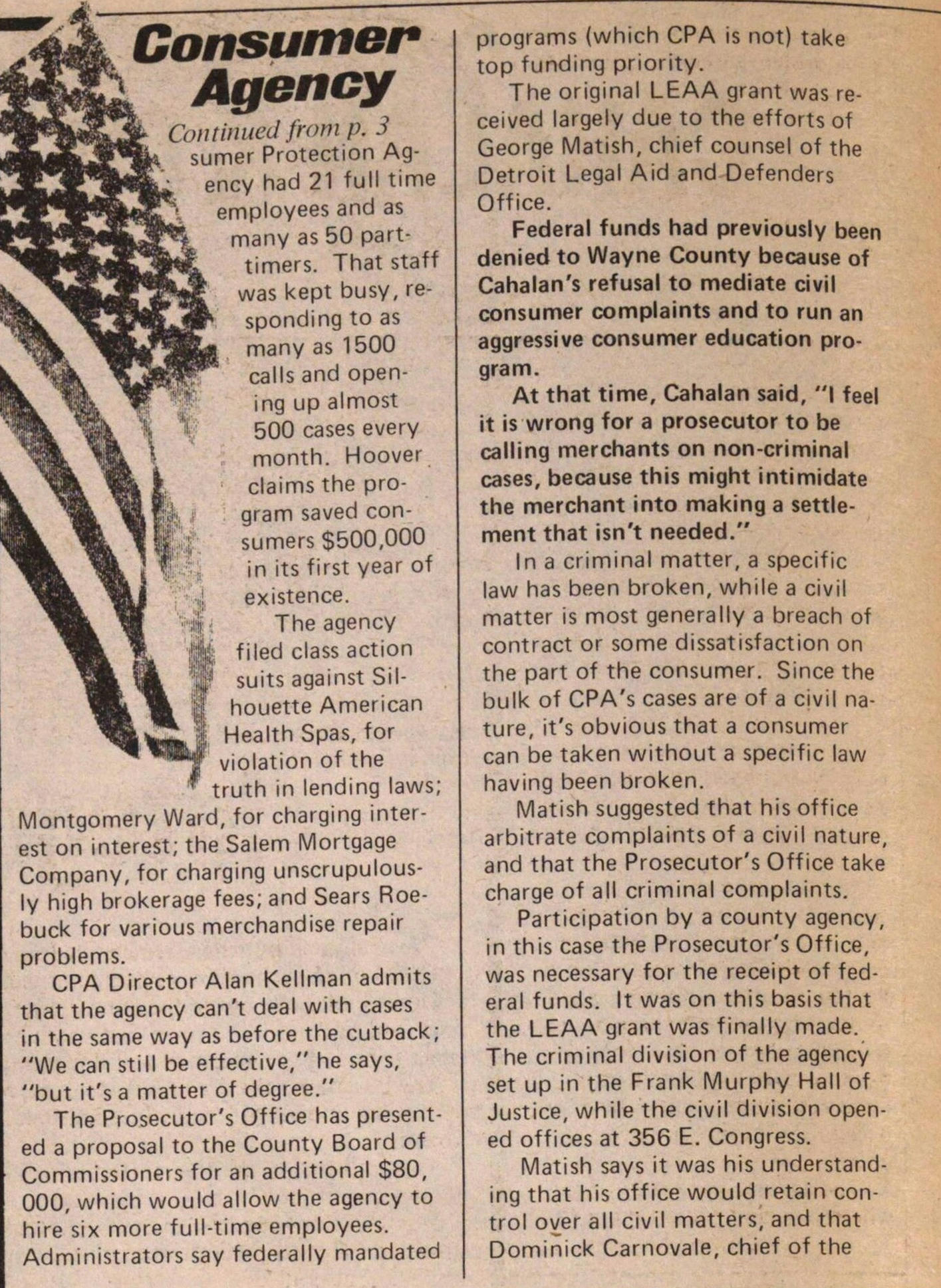 If you've bought a living room furniture set that wore out before the payment book was empty, watched your new roof blow away with the first windstorm, or were charged for car repairs that weren't completed, then you know full well that not all the rip-off artists in Wayne County are the kind who will grab you on a darkened street corner or break into your home at night.

Ralph Nader told the Washington State Bar News in 1970 that of the $780 billion spent by Americans in 1967, $200 billion of it was taken from them by some kind of fraud. This would represent approximately $1,000 per person, per year.

According to the Michigan Consumer Survival Manual, published by the State Attorney General's Office, "Michigan citizens are bilked out of more than $300 million each year." This would mean approximately $75 million in Wayne County alone.

White-collar criminals came under somewhat closer scrutiny in September, 1974, when the Wayne County Consumer Protection Agency (CPA) was created within the Prosecutor's Office. Funded by an initial $461,000 Federal LEAA grant, the new agency was mandated to get tough with "sophisticated individuals, trained in techniques of deception and selling."

The CPA took effective actions on complaints against Silhouette Health Spas, Michigan Consolidated Gas, Sears Roebuck, and Montgomery Ward. They even made sure Ollie Fretter delivered his "five pounds of coffee" when a consumer found a better deal elsewhere than Fretter Appliance.

The unit's effectiveness, however, has been called into serious doubt by recent budget cutbacks and allegations by former Agency staffers of interference and questionable hiring practices by Wayne County Prosecutor William Cahalan.

When the agency ran out of federal funds in July 1975, the County provided money to continue operation until December 1, the beginning of the county's fiscal year. At that time, the County Board of Auditors recommended a complete cutoff of CPA funds, prompting one county admi`nistrator to term this a "meat axe" approach to a legitimate financial problem.

The County Board of Commissioners then voted to allocate $239,000, about half of the amount requested, to the Prosecutor's Office for its consumer protection program.

This cutback forced the CPA to lay off half of its already-overworked staff.

Sue Hoover, Public Education Director of the decimated program, says the agency is "absolutely paralyzed." Many civil complaints formerly handled by the agency are now referred to other sources, some whose commitment to consumer rights is dubious.

Many complaints having to do with automobiles, for example, are now referred to the Detroit Automobile Dealers Association – which may be likened to having the Nixon White House investigate the Watergate affair.

Before the budget restriction, the Con-

-sumer Protection Agency had 21 full time employees and as many as 50 part-timers. That staff was kept busy, responding to as many as 1500 calls and opening up almost 500 cases every month. Hoover claims the program saved consumers $500,000 in its first year of existence.

CPA Director Alan Kellman admits that the agency can't deal with cases in the same way as before the cutback; "We can still be effective," he says, "but it's a matter of degree."

The Prosecutor's Office has presented a proposal to the County Board of Commissioners for an additional $80,000, which would allow the agency to hire six more full-time employees. Administrators say federally mandated programs (which CPA is not) take top funding priority.

The original LEAA grant was received largely due to the efforts of George Matish, chief counsel of the Detroit Legal Aid and Defenders Office.

Federal funds had previously been denied to Wayne County because of Cahalan's refusal to mediate civil consumer complaints and to run an aggressive consumer education program.

At that time, Cahalan said, "I feel it is wrong for a prosecutor to be calling merchants on non-criminal cases, because this might intimidate the merchant into making a settlement that isn't needed."

In a criminal matter, a specific law has been broken, while a civil matter is most generally a breach of contract or some dissatisfaction on the part of the consumer. Since the bulk of CPA's cases are of a civil nature, it's obvious that a consumer can be taken without a specific law having been broken.

Matish suggested that his office arbitrate complaints of a civil nature, and that the Prosecutor's Office take charge of all criminal complaints.

Participation by a county agency, in this case the Prosecutor's Office, was necessary for the receipt of federal funds. It was on this basis that the LEAA grant was finally made. The criminal division of the agency set up in the Frank Murphy Hall of Justice, while the civil division opened offices at 356 E. Congress.

Matish says it was his understanding that his office would retain control over all civil matters, and that Dominick Carnovale, chief of the Prosecutor's criminal division and CPA project director, assured him this would be the case.

"I wouldn't have gone into it any other way," Matish said. "If I had wanted to work for Cahalan I would have applied at the Prosecutor's Office."

Carnovale insists, "there was no way they could have total control," since the funds had actually been given to the Prosecutor's Office.

Just seven months after the program began. Legal Aid and Defenders severed its affiliation with CPA because, as Matish puts it, "It was intolerable to be working with Mr. Cahalan."

"The difference between a really good program and a half-assed one is really small. A certain attitude that would make the program go wasn't there," says Matish.

He claims that Cahalan's involvement in a case against the Michigan Consolidated Gas Company, shortly after the agency opened, typified the Prosecutor's attitude.

In that instance, CPA investigators had discovered that plumbing and heating companies recommended by Michigan Consolidated on official forms mailed to households were charging unscrupulously high rates for repairs, or conning people into unnecessarily replacing their furnaces. Some were not even licensed.

The agency was ready to act when Cahalan ordered them to

hold off until he had met with the gas company's president.

However, that meeting could not be held for a month, and the investigators felt that as this was a seasonal rip-off, it was necessary to act quickly.

CPA, however, was never allowed to act. After a review, the gas company did discontinue the practice which the agency had found questionable.

It was this type of interference from Cahalan, says Matish, that put a damper on the enthusiasm of many agency staffers and showed that the Prosecutor had no real commitment to consumer advocacy.

Cahalan's hiring practices have also been attacked by some former employees of the agency, who believe that the CPA is becoming a haven for Cahalan's personal and political friends, the majority of whom have no prior experience in consumer action.

In the meantime, Sue Hoover says morale at the agency is at an all-time low. The agency is able to handle merchandising complaints, but refers all others elsewhere.

Among other consumer protection agencies left to take up the slack are the UAW Consumer Affairs Department (which handles union workers' complaints), the Detroit Consumer Council (for city complaints), and – for what it's worth – those corporate public relations staffs equipped to deal with complaints.

But with the wind taken out of CPA's sails, Wayne County Residents would be wise to rely first on the age-old advice: "Caveat Emptor" (let the buyer beware).

Dennis Von Hatten has worked as a reporter for the Detroit Free Press. He was assisted in researching and developing this article by Maureen McDonald, the SUN's Assistant Editor.