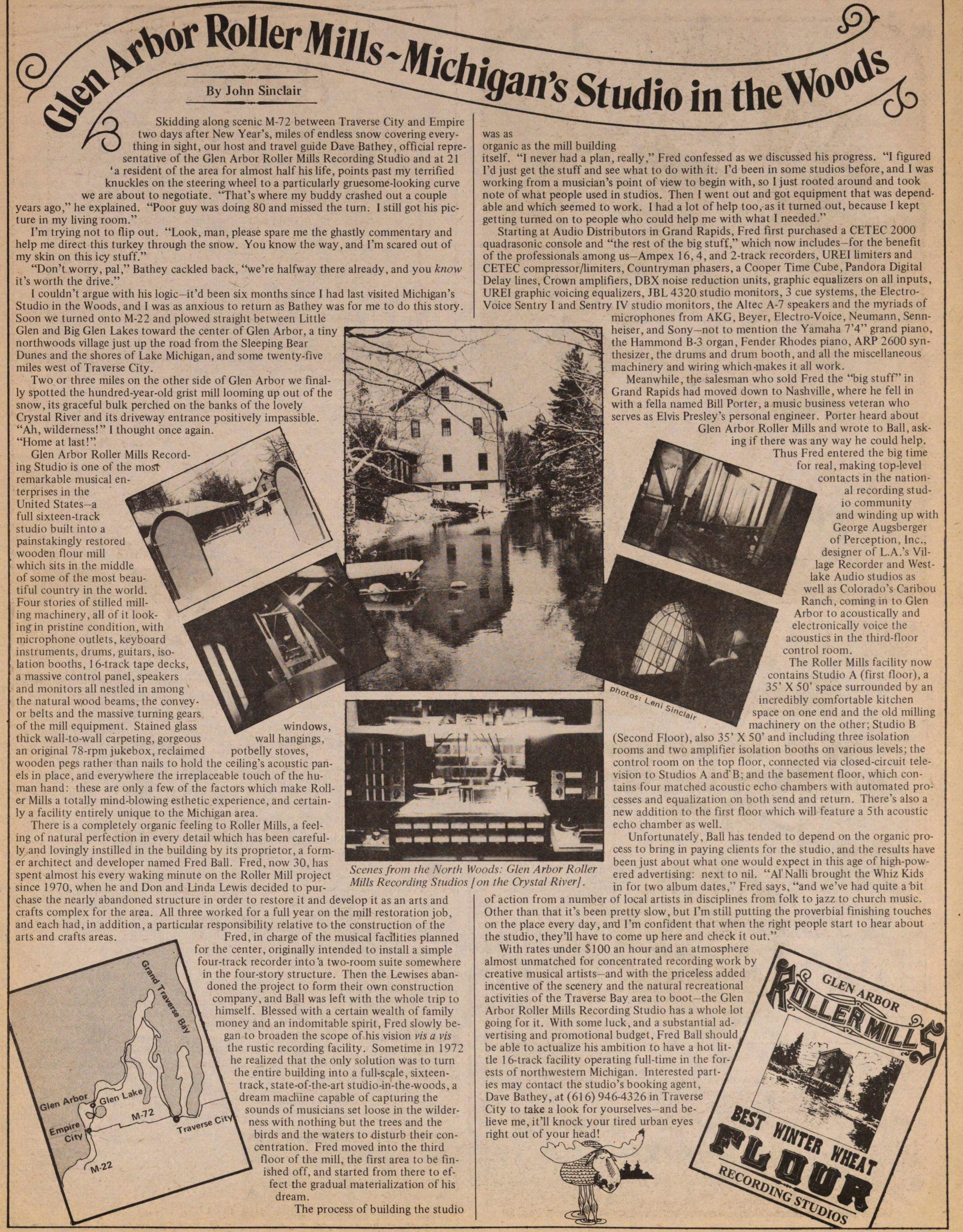 Skidding along scenic M-72 between Traverse City and Empire two days after New Year's, miles of endless snow covering everything in sight, our host and travel guide Dave Bathey, official representative of the Glen Arbor Roller Mills Recording Studio and at 21 'a resident of the area for almost half his life, points past my terrified knuckles on the steering wheel to a particularly gruesome-looking curve we are about to negotiate. "That's where my buddy crashed out a couple years ago," he explained. "Poor guy was doing 80 and missed the turn. I still got his picture in my living room."

I'm trying not to flip out. "Look, man, please spare me the ghastly commentary and help me direct this turkey through the snow. You know the way, and I'm scared out of my skin on this icy stuff."

"Don't worry, pal," Bathey cackled back, "we're halfway there already, and you know it's worth the drive."

I couldn't argue with his logic- it'd been six months since I had last visited Michigan's Studio in the Woods, and I was as anxious to return as Bathey was for me to do this story. Soon we turned onto M-22 and plowed straight between Little Glen and Big Glen Lakes toward the center of Glen Arbor, a tiny northwoods village just up the road from the Sleeping Bear Dunes and the shores of Lake Michigan, and some twenty-five miles west of Traverse City.

Two or three miles on the other side of Glen Arbor we finally spotted the hundred-year-old grist mill looming up out of the snow, its graceful bulk perched on the banks of the lovely Crystal River and its driveway entrance positively impassible. "Ah, wilderness!" I thought once again. "Home at last!"

Glen Arbor Roller Mills Recording Studio is one of the most remarkable musical enterprises in the United States - a full sixteen-track studio built into a painstakingly restored wooden flour mill which sits in the middle of some of the most beautiful country in the world. Four stories of stilled milling machinery, all of it looking in pristine condition, with microphone outlets, keyboard instruments, drums, guitars, isolation booths, 16-track tape decks, a massive control panel, speakers and monitors all nestled in among ' the natural wood beams, the conveyor belts and the massive turning gears of the mill equipment. Stained glass thick wall-to-wall carpeting, gorgeous windows, wall hangings. an original 78-rpm jukebox, reclaimed potbelly stoves, wooden pegs rather than nails to hold the ceiling's acoustic panels in place, and everywhere the irreplaceable touch of the human hand: these are only a few of the factors which make Roller Mills a totally mind-blowing esthetic experience, and certainly a facility entirely unique to the Michigan area.

There is a completely organic feeling to Roller Mills, a feeling of natural perfection in every detail which has been carefully and lovingly instilled in the building by its proprietor, a former architect and developer named Fred Ball. Fred, now 30, has spent almost his every waking minute on the Roller Mill project since 1970, when he and Don and Linda Lewis decided to chase the nearly abandoned structure in order to restore it and develop it as an arts and crafts complex for the area. All three worked for a full year on the mill restoration job, and each had, in addition,a particular responsibility relative to-the construction of the arts and crafts areas.

Fred, in charge of the musical facilities planned for the center, originally intended to install a simple four-track recorder into a two-room suite somewhere n the four-story structure. Then the Lewises abandoned the project to form their own construction company, and Ball was left with the whole trip to himself. Blessed with a certain wealth of family money and an indomitable spirit, Fred slowly began to broaden the scope of his vision vis a vis the rustic recording facility. Sometime in 1972 he realized that the only solution was to turn the entire building into a full-scale,sixteen-track, state-of-the-art studio-in-the-woods. a dream machine capable of capturing the sounds of musicians set loose in the wilderness with nothing but the trees and the birds and the waters to disturb their concentration. Fred moved into the third floor of the mill, the first area to be finished off, and started from there to effect the gradual materialization of his dream.

The process of building the studio was as organic as the mill building itself. "I never had a plan, really," Fred confessed as we discussed his progress. "I figured I'd just get the stuff and see what to do with it. I'd been in some studios before, and I was working from a musician's point of view to begin with, so I just rooted around and took note of what people used in studios. Then I went out and got equipment that was dependable and which seemed to work. I had a lot of help too, as it turned out, because I kept getting turned on to people who could help me with what I needed."

Starting at Audio Distributors in Grand Rapids, Fred first purchased a CETEC 2000 quadrasonic console and "the rest of the big stuff," which now includes - for the benefit of the professionals among us - Ampex 16, 4, and 2-track recorders, UREI limiters and CETEC compressor / limiters, Countryman phasers, a Cooper Time Cube, Pandora Digital Delay lines, Crown amplifiers, DBX noise reduction units, graphic equalizers on all inputs, UREI graphic voicing equalizers, JBL 4320 studio monitors, 3 cue systems, the ElectroVoice Sentry I and Sentry IV studio monitors, the Altec A-7 speakers and the myriads of microphones trom AKG, Beyer, Electro-voice, Neumann, Senheiser, and Sony - not to mention the Yamaha 7'4" grand piano, the Hammond B-3 organ, Fender Rhodes piano, ARP 2600 synthesizer, the drums and drum booth, and all the miscellaneous machinery and wiring which makes it all work.

Meanwhile, the salesman who sold Fred the "big stuff' in Grand Rapids had moved down to Nashville, where he fell in with a fella named Bill Porter, a music business veteran who serves as Elvis Presley's personal engineer. Porter heard about Glen Arbor Roller Mills and wrote to Ball , asking if there was any way he could help. Thus Fred entered the big time for real, making top-level contacts in the nation, al recording studio community and winding up with George Augsberger of Perception, Inc.. designer of L.A.'s Village Recorder and Westlake Audio studios as ' well as Colorado's Caribou Ranch, coming in to Glen Arbor to acoustically and electronically voice the acoustics in the third-floor control room.

The Roller Mills facility now contains Studio A (first floor), a 35' X 50' space surrounded by an incredibly comfortable kitchen space on one end and the old milling machinery on the other; Studio B (Second Floor), also 35' X 50' and including three isolation rooms and two amplifier isolation booths on various levels; the control room on the top floor, connected via closed-circuit television to Studios A and B; and the basement floor, which contains four matched acoustic echo chambers with automated processes and equalization on both send and return. There's also a new addition to the first floor which will feature a 5th acoustic echo chamber as well.

Unfortunately, Ball has tended to depend on the organic process to bring in paying clients for the studio, and the results have been just about what one would expect in this age of high-powered advertising: next to nil. "Al'Nalli brought the Whiz Kids in for two album dates," Fred says, "and we've had quite a bit of action from a number of local artists in disciplines from folk to jazz to church music. Other than that it's been pretty slow, but I'm still putting the proverbial finishing touches on the place every day, anti I'm confident that when the right people start to hear about the studio, they'll have to come up here and check it out."

With rates under $100 an hour and an atmosphere almost unmatched for concentrated recording work by creative musical artists-and with the priceless added incentive of the scenery and the natural recreational activities of the Traverse Bay area to boot - the Glen Arbor Roller Mills Recording Studio has a whole lot going for it. With some luck,and a substantial advertising and promotional budget, Fred Ball should be able to actualize his ambition to have a hot little 16-track facility operating full-time in the forests of northwestern Michigan. Interested parties may contact the studio s booking agent, Dave Bathey, at (616) 946-4326 in Traverse City to take a look for yourselves-and believe me, it'll knock your tired urban eyes right out of your head!