One Flew Over The Cuckoo's Nest 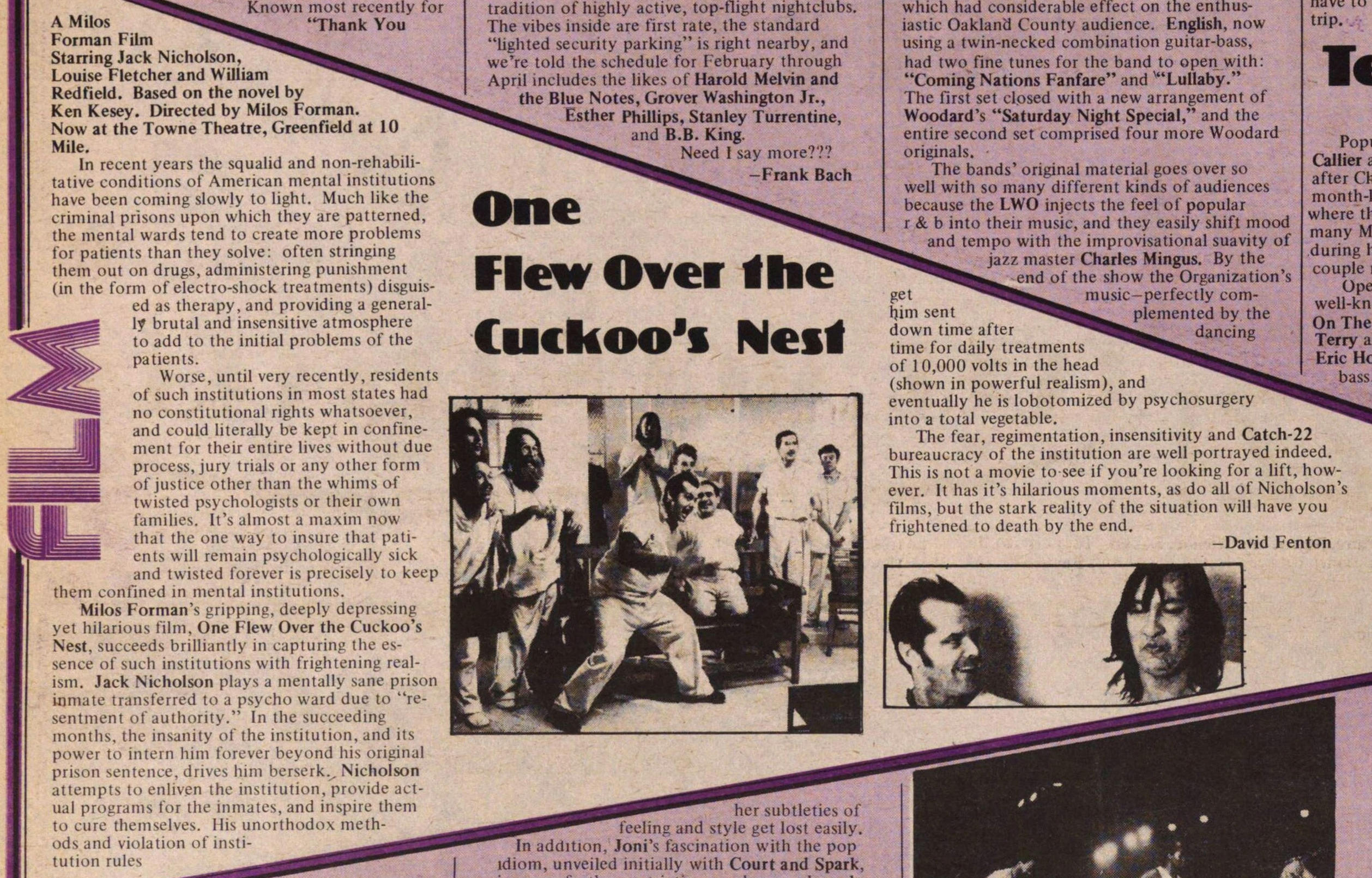 A Milos Forman Film Starring Jack Nicholson, Louise Fletcher and William Redfield. Based on the novel by Ken Kesey. Directed by Milos Forman. Now at the Towne Theatre, Greenfield at 10 Mile.

In recent years the squalid and non-rehabilitative conditions of American mental institutions have been coming slowly to light. Much like the criminal prisons upon which they are patterned, the mental wards tend to create more problems for patients than they solve: often stringing them out on drugs, administering punishment (in the form of electro-shock treatments) disguised as therapy, and providing a generally brutal and insensitive atmosphere to add to the initial problems of the patients.

Worse, until very recently, residents of such institutions in most states had no constitutional rights whatsoever, and could literally be kept in confinement for their entire lives without due process, jury trials or any other form of justice other than the whims of twisted psychologists or their own families. It's almost a maxim now that the one way to insure that patients will remain psychologically sick and twisted forever is precisely to keep them confined in mental institutions.

Milos Forman's gripping, deeply depressing yet hilarious film, One Flew Over the Cuckoo's Nest, succeeds brilliantly in capturing the essence of such institutions with frightening realism. Jack Nicholson plays a mentally sane prison inmate transferred to a psycho ward due to "resentment of authority." In the succeeding months, the insanity of the institution, and its power to intern him forever beyond his original prison sentence, drives him berserk. Nicholson attempts to enliven the institution, provide actual programs tor the inmates, and inspire them to cure themselves. His unorthodox methods and violation of institution rules get him sent down time after time for daily treatments of 10,000 volts in the head (shown in powerful realism), and eventually he is lobotomized into a total vegetable.

The fear, regimentation, insensitivity and Catch-22 bureaucracy of the institution are well portrayed indeed. This is not a movie to see if you're looking for a lift, however. It has it's hilarious moments, as do all of Nicholson's films, but the stark reality of the situation will have you frightened to death by the end.