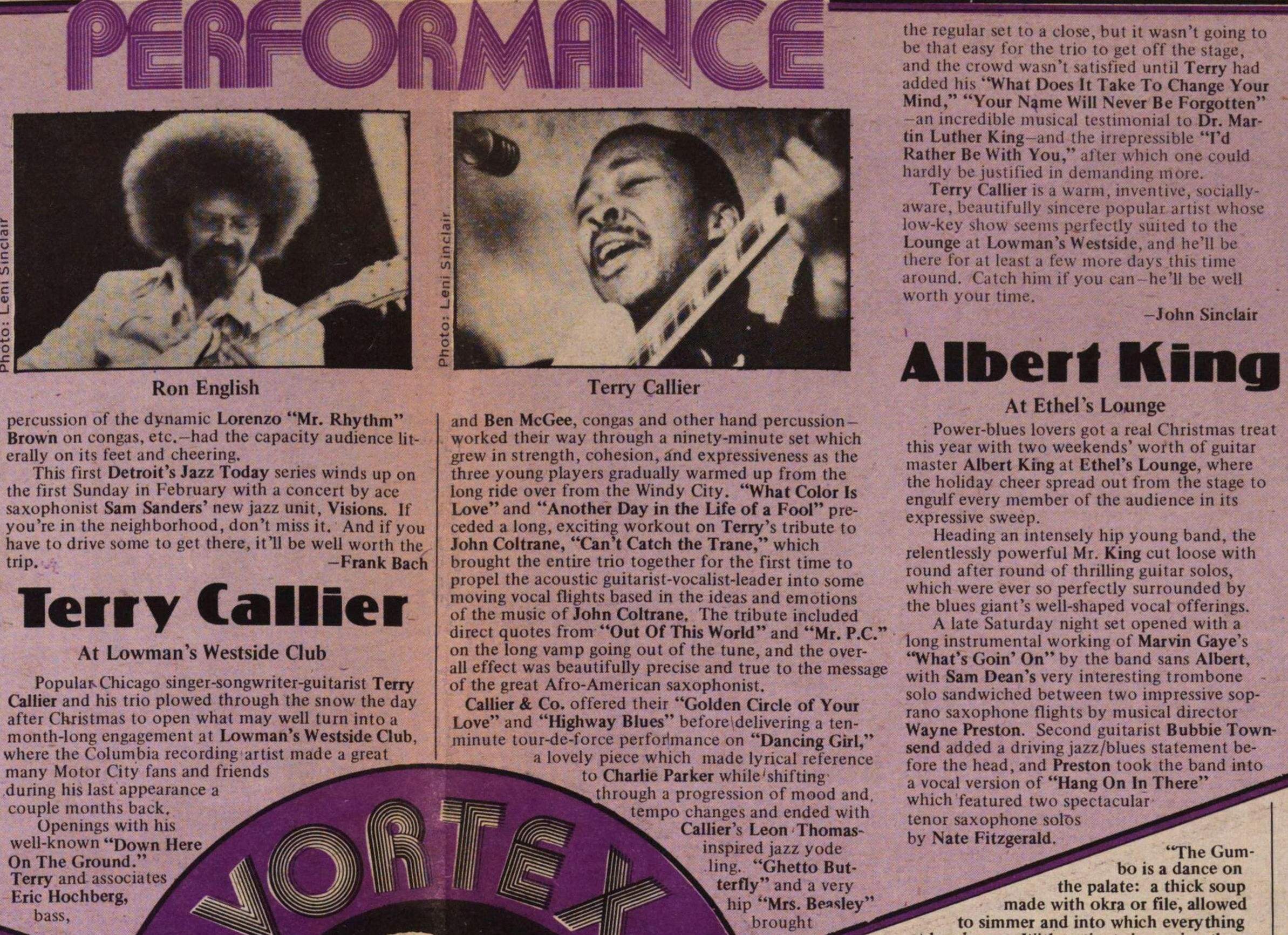 PopulaN Chicago singer-songwriter-guitarist Terry Callier and his trio plowed through the snow the day after Ch-ristmas to open what may well turn into a month-long engagement at Lowman's Westside Club, where the Columbia recording artist made a great many Motor City fans and friends during his last appearance a couple months back. Openings with lus well-known "Down Hete. On The Ground. Terry and associates Eric Hochberg, A bass, Am and Ben McGee, congas and other hand percussion - workcd their way through a ninety-minute set which grew in strength, cohesión, ánd expressiveness as the three young players gradually warmed up from the long ride over from the Windy City. "What Color Is Love" and "Another Day in the Life of a Fooi" preceded a long, exciting workout on Terry's tribute to John Coltrane, "Can't Catch the Trane," which brought the entire trio together for the first time to propel the acoustic guitarist-vocalist-leader into some moving vocal flights based in the ideas and emotions of the music of John Coltrane. The tribute included direct quotes from "Out Of This World" and "Mr. P.C." on the long vamp going out of the tune, and the overall effect was beautifully precise and true to the message of the great Afro-American saxophonist. Callier & Co. oflered their "Golden Circle of Your Love" and "Highway Blues" beforedelivering a tenminute tour-de-forcc performance on "Dancing Girl," a lovely piece which made lyrical reference to Charlie Parker while'shifting kthrough a progression of mood and, tempo changes and ended with w Callier's Leon inspired jazz yode ling. "Ghetto But. terfly" and a very l hip "Mrs. Beasley" l brought the regular sel lo a close, hut it wasn't going to be that easy for the trio to get off the si and the crowd wasn't .atisfied until Terry luid added his "What Does It Take To Change Your Mind," "Your Name Will Never Be Forgotten" -an incredible musical testimonial to Dr. Mar(in Luther and the ifrepressible "I'd Rather Be With You," alter which one ciuiid hardly be justífied in demanding more. Terry Callier is a warm, inventivo, sociailyaware, beautifully sincere popular artist whose low-key show seems pgrfectíy súited to the Lounge at Lowman's Westsidc, and lu'll be there lor at least a lew more dáys lilis lime around. Catchhim if you can he'll he uell wortli your tune.