Busing Begins In Detroit Will Statewide Desegregation Be Next? 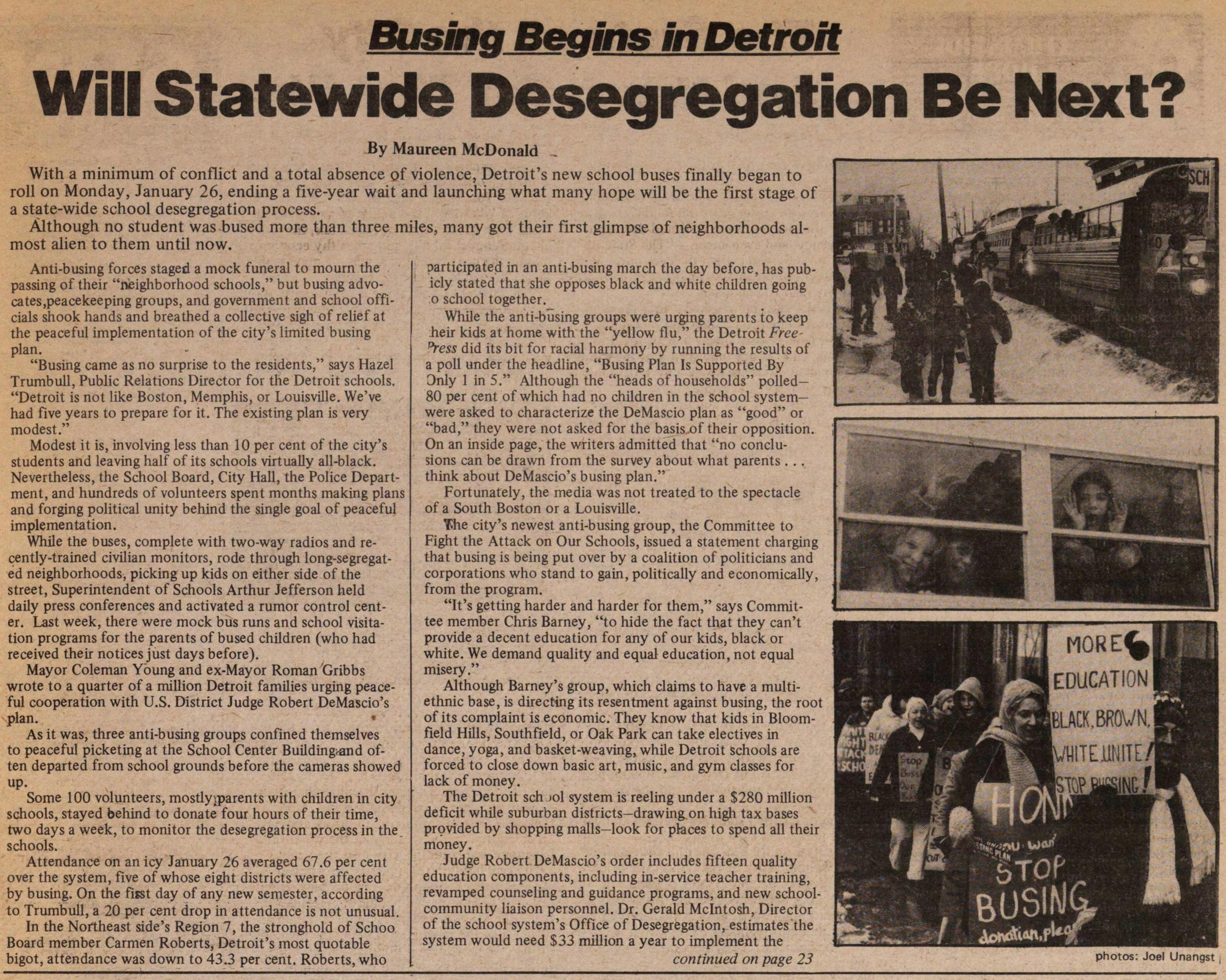 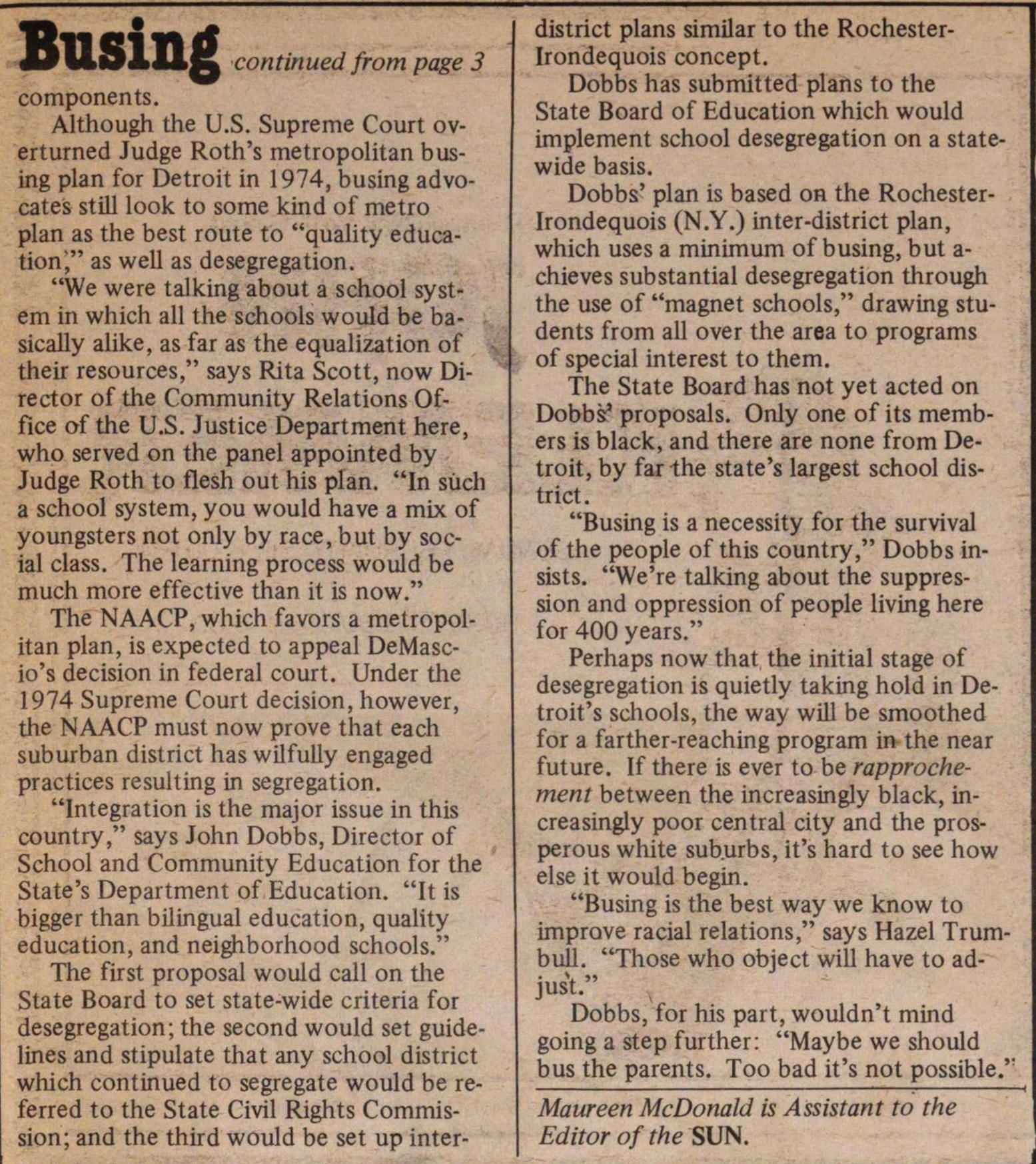 Will Statewide Desegregation Be Next?

With a minimum of conflict and a total absence of violence, Detroit's new school buses finally began to roll on Monday, January 26, ending a five-year wait and launching what many hope will be the first stage of a state-wide school desegregation process.

Although no student was bused more than three miles, many got their first glimpse of neighborhoods almost alien to them until now.

Anti-busing forces staged a mock funeral to mourn the passing of their "neighborhood schools," but busing advocates, peacekeeping groups, and government and school officials shook hands and breathed a collective sigh of relief at the peaceful implementation of the city's limited busing plan.

"Busing came as no surprise to the residents," says Hazel Trumbull, Public Relations Director for the Detroit schools. "Detroit is not like Boston, Memphis, or Louisville. We've had five years to prepare for it. The existing plan is very modest."

Modest it is, involving less than 10 per cent of the city's students and leaving half of its schools virtually all-black. Nevertheless, the School Board, City Hall, the Police Department, and hundreds of volunteers spent months making plans and forging political unity behind the single goal of peaceful implementation.

While the buses, complete with two-way radios and recently-trained civilian monitors, rode through long-segregated neighborhoods, picking up kids on either side of the street, Superintendent of Schools Arthur Jefferson held daily press conferences and activated a rumor control center. Last week, there were mock bus runs and school visitation programs for the parents of bused children (who had received their notices just days before).

As it was, three anti-busing groups confined themselves to peaceful picketing at the School Center Building and often departed from school grounds before the cameras showed up.

Some 100 volunteers, mostly parents with children in city schools, stayed behind to donate four hours of their time, two days a week, to monitor the desegregation process in the schools.

Attendance on an icy January 26 averaged 67.6 per cent over the system, five of whose eight districts were affected by busing. On the first day of any new semester, according to Trumbull, a 20 per cent drop in attendance is not unusual.

In the Northeast side's Region 7, the stronghold of School Board member Carmen Roberts, Detroit's most quotable bigot, attendance was down to 43.3 per cent. Roberts, who participated in an anti-busing march the day before, has publicly stated that she opposes black and white children going to school together.

While the anti-busing groups were urging parents to keep heir kids at home with the "yellow flu" the Detroit Free Press did its bit for racial harmony by running the results of a poll under the headline, "Busing Plan Is Supported By Only 1 in 5." Although the "heads of households" polled80 per cent of which had no children in the school system- were asked to characterize the DeMascio plan as "good" or "bad," they were not asked for the basis of their opposition.

On an inside page, the writers admitted that "no conclusions can be drawn from the survey about what parents . . . think about DeMascio's busing plan."

Fortunately, the media was not treated to the spectacle of a South Boston or a Louisville.

The city's newest anti-busing group, the Committee to Fight the Attack on Our Schools, issued a statement charging that busing is being put over by a coalition of politicians and corporations who stand to gain, politically and economically, from the program.

"It's getting harder and harder for them," says Committee member Chris Barney, "to hide the fact that they can't provide a decent education for any of our kids, black or white. We demand quality and equal education, not equal misery."

Although Barney's group, which claims to have a multiethnic base, is directing its resentment against busing, the root of its complaint is economic. They know that kids in Bloomfield Hills, Southfield, or Oak Park can take electives in dance, yoga, and basket-weaving, while Detroit schools are forced to close down basic art, music, and gym classes for lack of money.

The Detroit schooI system is reeling under a $280 million deficit while suburban districts- drawing on high tax bases provided by shopping mails-look for places to spend all their money.

Although the U.S. Supreme Court overturned Judge Roth's metropolitan busing plan for Detroit in 1974, busing advocates still look to some kind of metro plan as the best route to "quality education" as well as desegregation.

"We were talking about a school system in which all the schools would be basically alike, as far as the equalization of their resources," says Rita Scott, now Director of the Community Relations Office of the U.S. Justice Department here, who served on the panel appointed by Judge Roth to flesh out his plan. "In such a school system, you would have a mix of youngsters not only by race, but by social class. The learning process would be much more effective than it is now."

The NAACP, which favors a metropolitan plan, is expected to appeal DeMascio's decision in federal court. Under the 1974 Supreme Court decision, however, the NAACP must now prove that each suburban district has willfully engaged practices resulting in segregation.

"Integration is the major issue in this country," says John Dobbs, Director of School and Community Education for the State's Department of Education. "It is bigger than bilingual education, quality education, and neighborhood schools."

The first proposal would call on the State Board to set state-wide criteria for desegregation; the second would set guidelines and stipulate that any school district which continued to segregate would be referred to the State Civil Rights Commission; and the third would be set up district plans similar to the Rochester-Irondequois concept.

Dobbs has submitted plans to the State Board of Education which would implement school desegregation on a statewide basis.

Dobbs' plan is based on the Rochester-Irondequois (N.Y.) inter-district plan, which uses a minimum of busing, but achieves substantial desegregation through the use of "magnet schools," drawing students from all over the area to programs of special interest to them.

The State Board has not yet acted on Dobbs' proposals. Only one of its members is black, and there are none from Detroit, by far the state's largest school district.

"Busing is a necessity for the survival of the people of this country," Dobbs insists. "We're talking about the suppression and oppression of people living here for 400 years."

Perhaps now that the initial stage of desegregation is quietly taking hold in Detroit's schools, the way will be smoothed for a farther-reaching program in the near future. If there is ever to be rapprochement between the increasingly black, increasingly poor central city and the prosperous white suburbs, it's hard to see how else it would begin.

"Busing is the best way we know to improve racial relations," says Hazel Trumbull. "Those who object will have to adjust."

Dobbs, for his part, wouldn't mind going a step further: "Maybe we should bus the parents. Too bad it's not possible."

Maureen McDonald is Assistant to the Editor of the SUN.