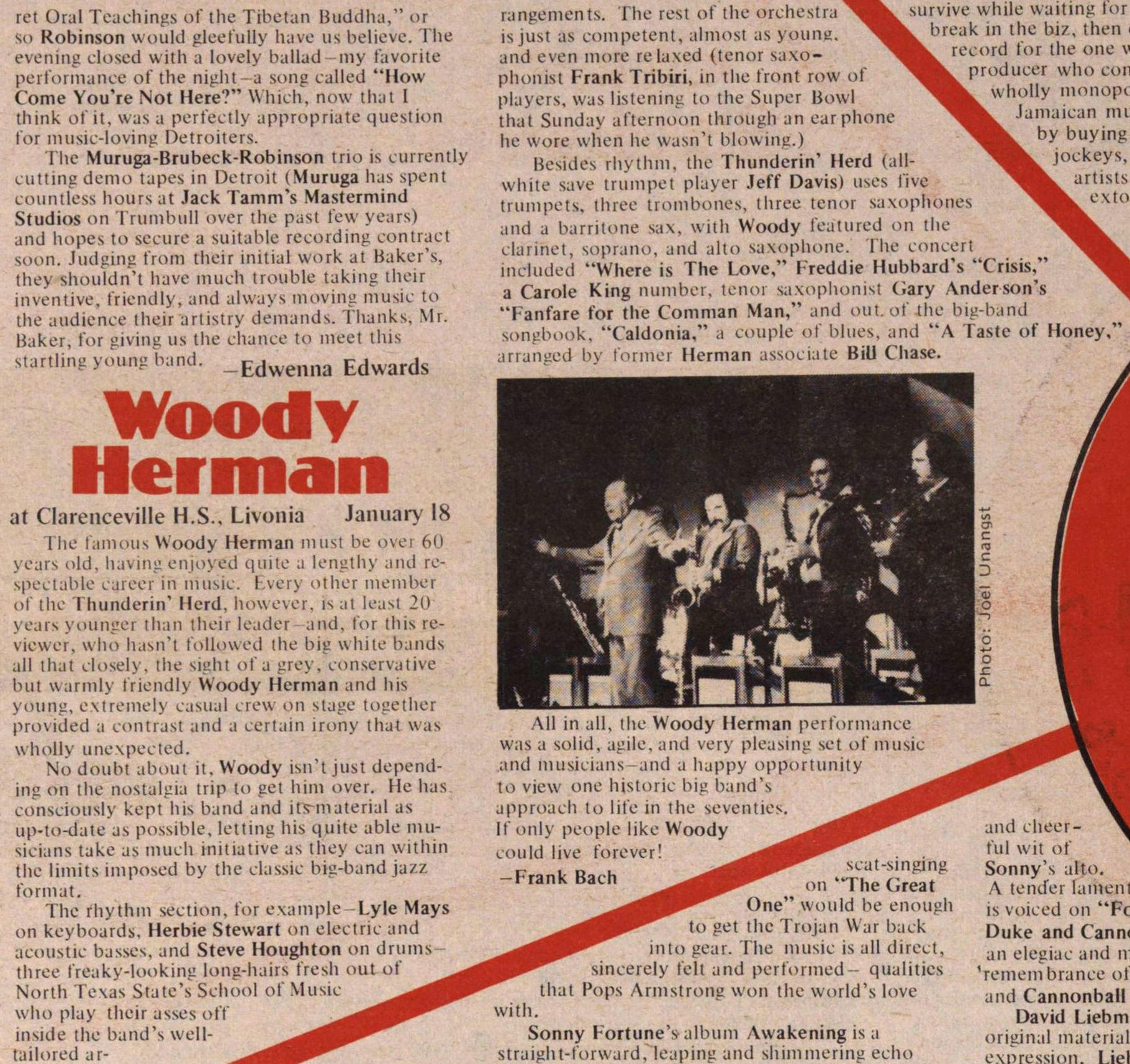 The famous Woody Herman must be over 60 years old, having enjoyed quite a lengthy and respectable career in music. Every other member of the Thunderin' Herd, however, is at least 20 years younger than their leader-and, for this reviewer, who hasn't followed the big white bands all that closely, the sight of a grey, conservative but warmly friendly Woody Herman and his young, extremely casual crew or stage together provided a contrast and a certain irony that was wholly unexpected.

No doubt about it. Woody isn't just depending on the nostalgia trip to get hi over. He has consciously kepi his band and its material as up-to-date as possible, letting his quite able musicians take as much initiative as they can within the limits imposed by the classic big-band jazz format.

The rhythm section, for example-Lyle Mays on keyboards, Herbie Stewart on electric and acoustic basses. and Steve Houghton on drums-three freaky0looking long-hairs fresh out of North Texas State's School of Music who play their asses off inside the band's well-tailored arrangements. The rest of the orchestra is just as competent, almost as young and even more relaxed (tenor saxophonist Frank Tribiri, in the front row of players, was listening to the Super Bowl that Sunday afternoon through an ear phone he wore when he wasn't blowing.)

Besides rhythm. the Thundern' Herd (all white save trumpet player Jeff Davis) uses live trumpets, three trombones, three tenor saxophones and a baritone sax, with Woody featured on the clarinet, soprano, and alto saxophone. The concert included "Where is The Love," Freddie Hubbard's "Crisis," a Carole King number, tenor saxophonist Gary Anderson's "Fanfare for the Comman Man," and out af the big-band songbook, "Caldonia," a couple of blues, and "A Taste of Honey," arranged by former Herman associate Bill Chase.

All in all, the Woody Herman performance was a solid, agile, and very pleasing set of music and musicians-and a happy opportunity to view one historic big band's approach to life in the seventies.. It only people like Woody could live forever!