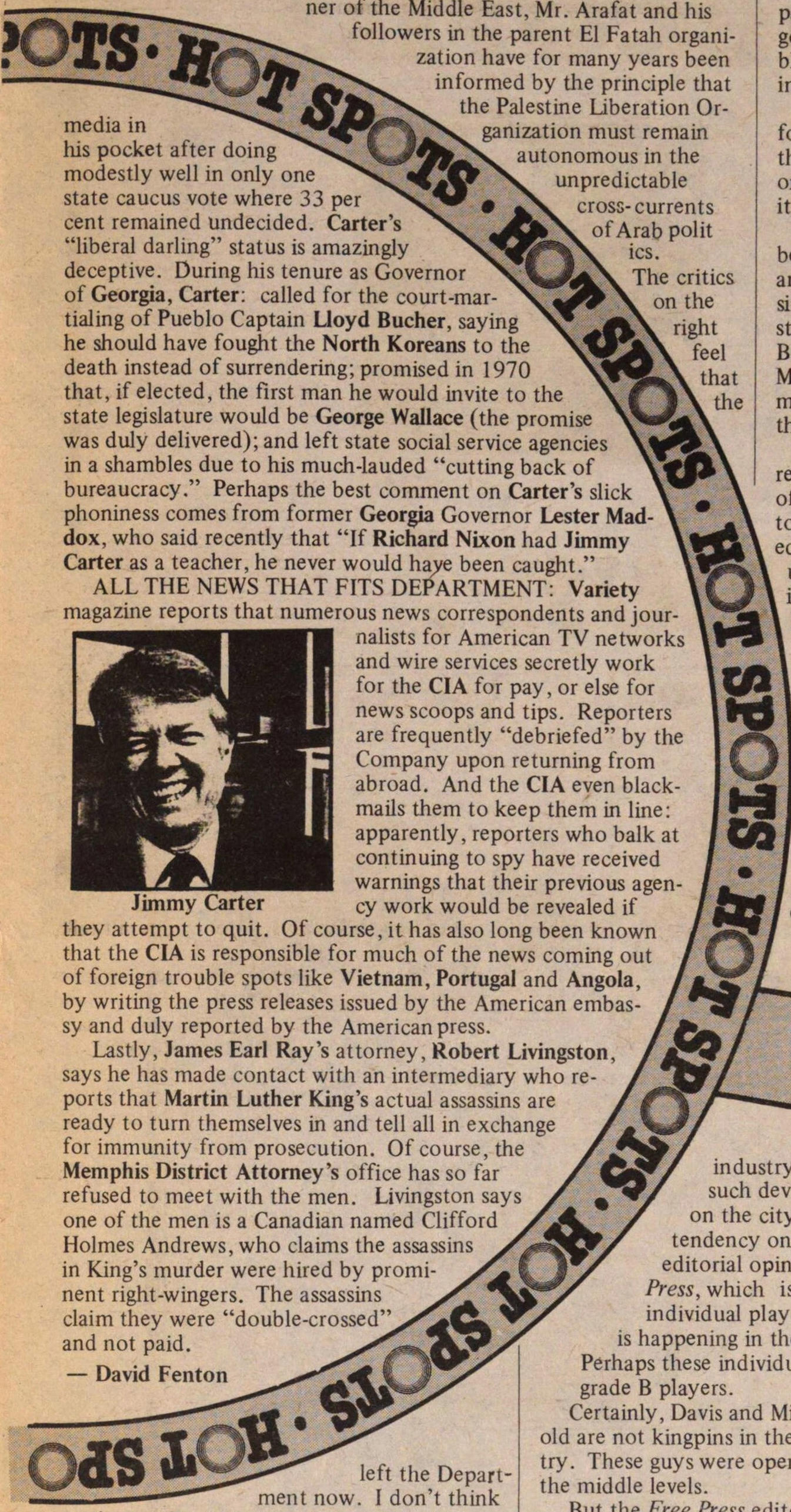 So Richard and Pat Nixon are going back to China for a fourth anniversary visit, conveniently timing their trek a scant three days before the New Hampshire Presidential primary. Coincidence? The net effect of the timing could well be to hurt Gerald Ford's chances by associating him with the Nixon pardon again in the eyes of historically short-minded New Hampshire voters.

Could there really be a carefully-orchestrated and top-secret strategy within Ford's campaign to insure that Jerry loses the election? How else can one explain Ford's recent series of brilliant utterances -- from leaving the money "in the private sector where it belongs" (right, Jerry, it's done a lot of good there) to the recent gem about leaving the abortion decision "to the states"? Even Betty had to issue a quick press release thereafter to dissociate herself from Lunkhead. And of course the press continues to have a field day with Ford's incompetence, stupidity and much-lauded clumsiness. Our guess is that the Rockefeller Mafioso lurk behind all this, waiting to emerge victorious from the Ford-Reagan shambles at the Republican convention. Remember, fans, like Bob Dylan says, "Money doesn't talk, it swears ..."

Meanwhile, in New Hampshire, Manchester newspaper czar William Loeb has once again succeeded in branding his state's primary and resultant national media ripples with anti-abortion fervor. Loeb 's newspaper mouthpiece has been having a sensationalistic field day with unborn fetuses and the "right to life." His Union Leader, the leading newspaper in the state, has the power to define the issues in New Hampshire, and of course the networks and news magazines take it from there. How fervent anti-abortionitis is in the state in terms of real support, we may never know. The medium is the message, after all ...

On the Democratic side, chameleon Jimmy Carter seems to have the media in his pocket after doing modestly well in only one state caucus vote where 33 percent remained undecided. Carter's "liberal darling" status is amazingly deceptive. During his tenure as Governor of Georgia, Carter called for the court-martialing of Pueblo Captain Lloyd Bucher, saying he should have fought the North Koreans to the death instead of surrendering; promised in 1970 that, if elected, the first man he would invite to the state legislature would be George Wallace (the promise was duly delivered); and left state social service agencies in a shambles due to his much-lauded "cutting back of bureaucracy." Perhaps the best comment on Carter's slick phoniness comes from former Georgia Governor Lester Maddox, who said recently that "If Richard Nixon had Jimmy Carter as a teacher, he never would have been caught."

ALL THE NEWS THAT FITS DEPARTMENT: Variety magazine reports that numerous news correspondents and journalists for American TV networks and wire services secretly work for the CIA for pay, or else for news scoops and tips. Reporters are frequently "debriefed" by the Company upon returning from abroad. And the CIA even blackmails them to keep them in line: apparently, reporters who balk at continuing to spy have received warnings that their previous agency work would be revealed if they attempt to quit. Of course, it has also long been known that the CIA is responsible for much of the news coming out of foreign trouble spots like Vietnam, Portugal and Angola, by writing the press releases issued by the American embassy and duly reported by the American press.

Lastly, James Earl Ray's attorney, Robert Livingston, says he has made contact with an intermediary who reports that Martin Luther King's actual assassins are ready to turn themselves in and tell all in exchange for immunity from prosecution. Of course, the Memphis District Attorney's office has so far refused to meet with the men. Livingston says one of the men is a Canadian named Clifford Holmes Andrews, who claims the assassins in King s murder were hired by prominent right-wingers. The assassins claim they were "double-crossed" and not paid.