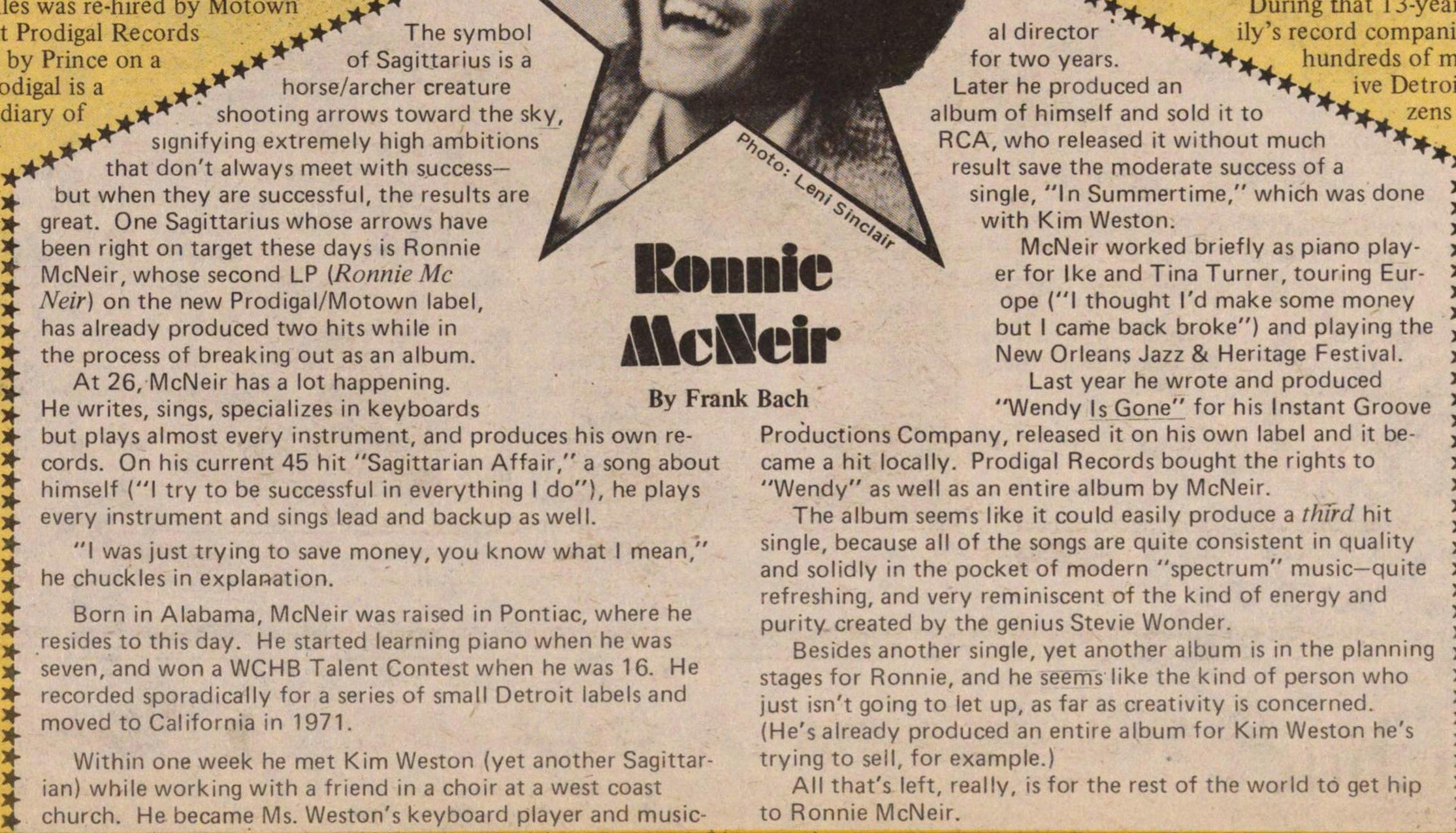 The symbol of Sagittarius is a horse/archer creature shooting arrows toward the sky, signifying extremely high ambitions that don't always meet with success-but when they are successful, the results are great. One Sagittarius whose arrows have been right on target these days is Ronnie L McNeir, whose second LP (Ronnie McNeir) on the new Prodigal/Motown label, has already produced two hits while in the process of breaking out as an album.

At 26, McNeir has a lot happening. He writes, sings, specializes in keyboards but plays almost every instrument, and produces his own records. On his current 45 hit "Sagittarian Affair," a song about himself ("I try to be successful in everything I do"), he plays every instrument and sings lead and backup as well.

"I was just trying to save money, you know what I mean," he chuckles in explanation.

Born in Alabama, McNeir was raised in Pontiac, where he resides to this day. He started learning piano when he was seven, and won a WCHB Talent Contest when he was 16. He recorded sporadically for a series of small Detroit labels and moved to California in 1971.

Within one week he met Kim Weston (yet another Sagittarian) while working with a friend in a choir at a west coast church. He became Ms. Weston's keyboard player and musical director for two years. Later he produced an album of himself and sold it to RCA, who released it without much result save the moderate success of a single, "In Summertime," which was done with Kim Weston.

McNeir worked briefly as piano j er for Ike and Tina Turner, touring Europe ("I thought l'd make some money but I came back broke") and playing the New Orleans Jazz & Heritage Festival. Last year he wrote and produced "Wendy Is Gone" for his Instant Groove Productions Company, released it on his own label and it became a hit locally. Prodigal Records bought the rights to "Wendy" as well as an entire album by McNeir.

The album seems like it could easily produce a third hit single, because all of the songs are quite consistent in quality and solidly in the pocket of modern "spectrum" music-quite refreshing, and very reminiscent of the kind of energy and purity created by the genius Stevie Wonder.

Besides another single, yet another album is in the planning stages for Ronnie, and he seems like the kind of person who just isn't going to Iet up, as far as creativity is concerned. (He's already produced an entire album for Kim Weston he's trying to sell, for example.)

All that's left, really, is for the rest of the world to get hip to Ronnie McNeir.