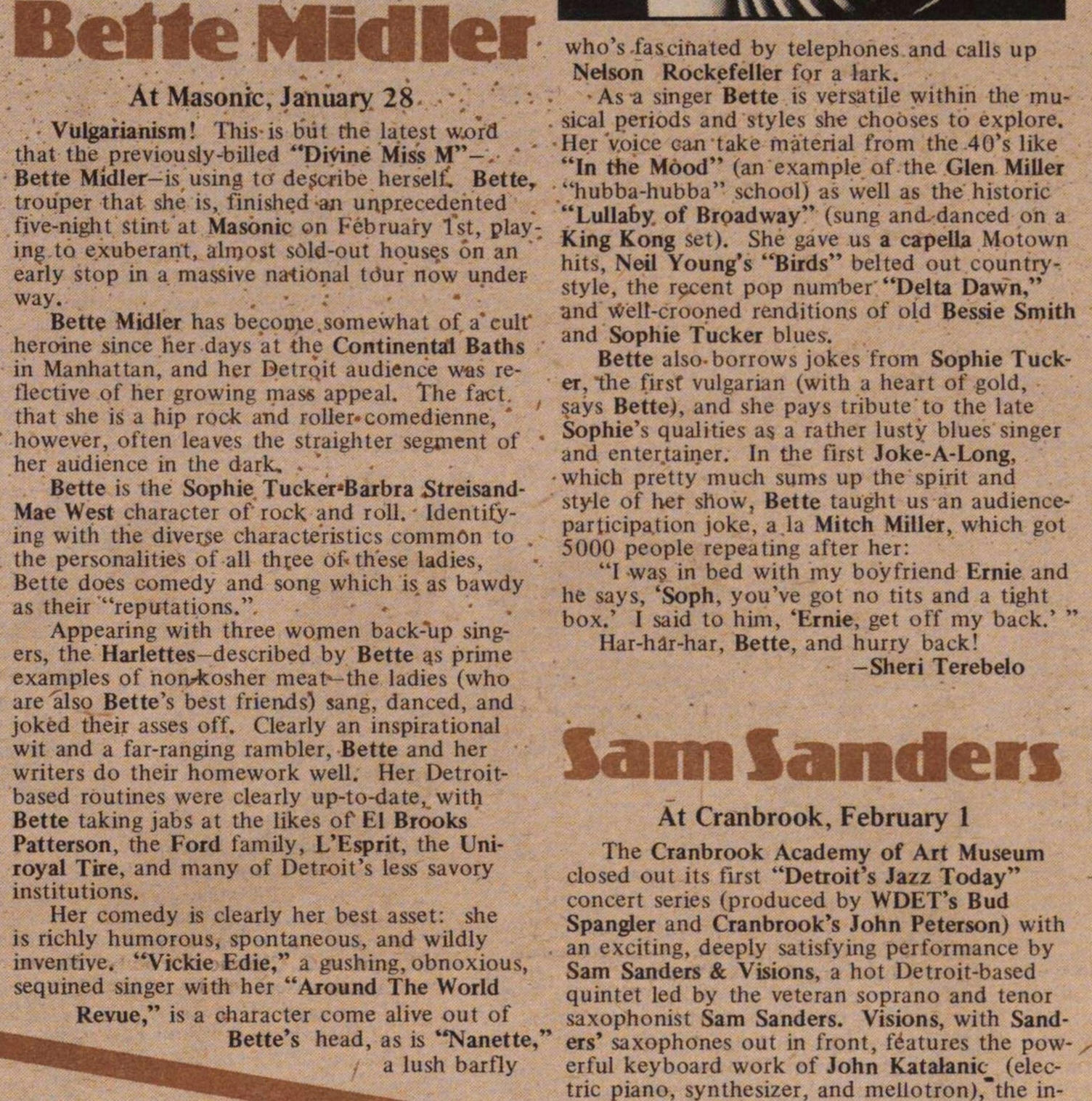 Vulgarianism! This is but the latest word that the previously billed "Divine Miss M"- " Bette Midler-is using to describe herself Bette, trouper that she is, finished an unprecedented five-night stint at Masonic on February 1st, playing to exuberant, almost sold-out houses on an early stop in a massive national tour now under way.

Bette Midler has become somewhat of a cult heroine since her days at the Continental Baths in Manhattan, and her Detroit audience was reflective of her growing mass appeal. The fact that she is a hip rock and roller comedienne, however, often leaves the straighter segment of her audience in the dark.

Bette is the Sophie Tucker Barbra Streisand Mae West character of rock and roll. Identifying with the diverse characteristics common to the personalities of all three of these ladies, Bette does comedy and song which is as bawdy as their "reputations."

Appearing with three women backup singers, the Harlettes-described by Bette as prime examples of non-kosher meat-the ladies (who are also Bette 's best friends) sang, danced, and joked their asses off. Clearly an inspirational wit and a far-ranging rambler, Bette and her writers do their homework well. Her Detroit based routines were clearly up-to-date, with Bette taking jabs at the likes of El Brooks Patterson, the Ford family, L'Esprit, the Uniroyal Tire, and many of Detroit's less savory institutions.

Her comedy is clearly her best asset: she is richly humorous, spontaneous, and wildly inventive. "Vickie Edie," a gushing, obnoxious, sequined singer with her "Around The World Revue," is a character come alive out of Bette's head, as is "Nanette," a lush barfly who's fascinated by telephones and calls up Netson Rockefeller for a lark.

As a singer Bette is versatile within the musical periods and styles she chooses to explore. Her voice can take material from the 40's like "In the Mood" (an example of the Glen Miller "hubba-hubba" school) as well as the history "Lullaby of Broadway" (sung and-danced on a King Kong set). She gave us a capella Motown hits, Neil Young's "Birds" belted out country-style, the recent pop number "Delta Dawn," and well-crooned renditions of old Bessie Smith and Sophie Tucker blues.

Bette borrows jokes from Sophie Tucker, "the first vulgarian (with a heart of gold says Bette), and she pays tribute to the late Sophie's qualities as a rather lusty blues singer and entertainer. In the first Joke-A-Long, which pretty much sums up the spirit and style of her show, Bette taught us an audience-participation joke, a la Mitch Miller, which got 5000 people repeating after her: