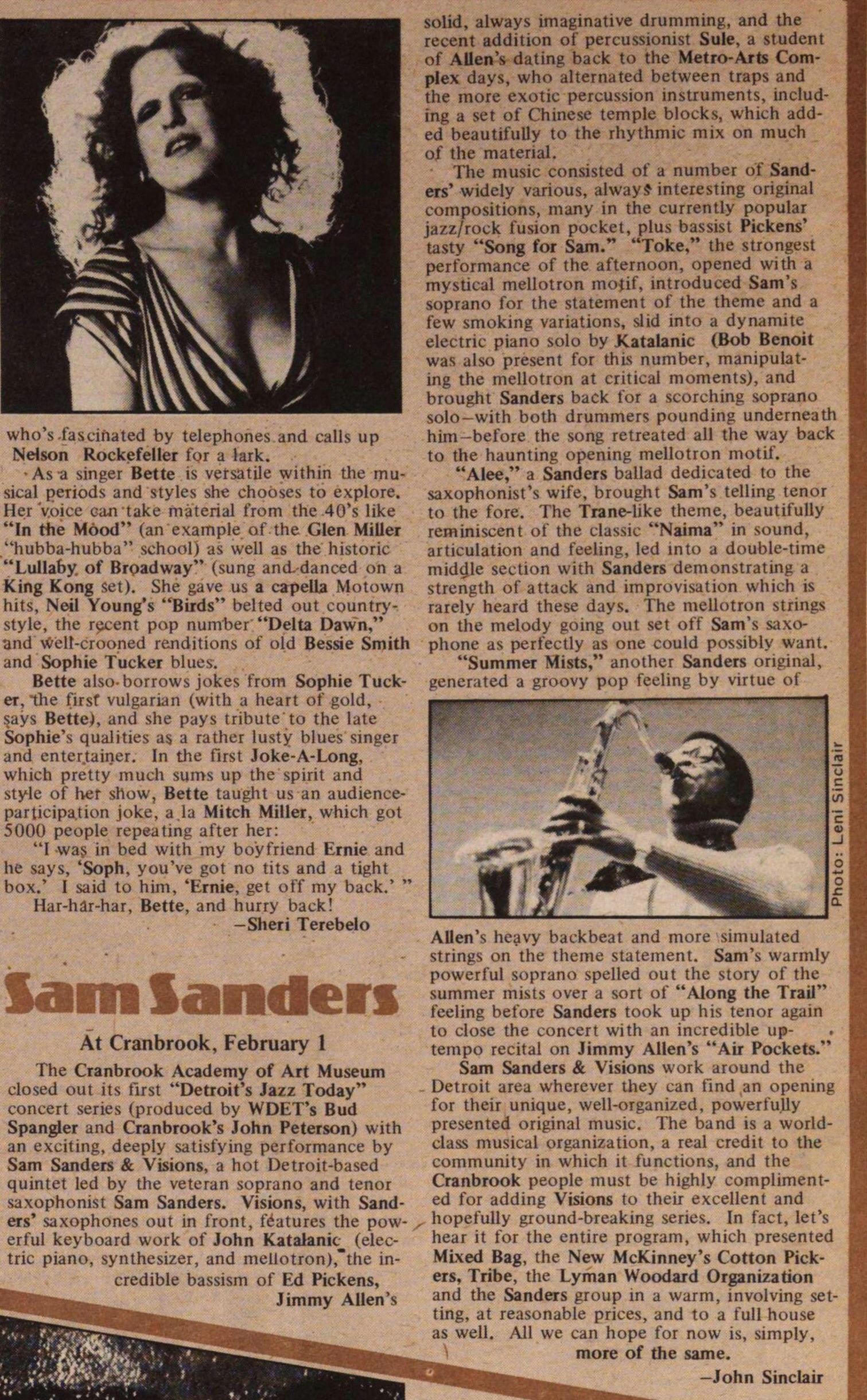 The Cranbrook Academy of Art Museum closed out its first "Detroit's Jazz Today" concert series (produced by WDET's Bud Spangler and Cranbrook's John Peterson) with an exciting, deeply satisfying performance by Sam Sanders & Visions, a hot Detroit-based quintet led by the veteran soprano and tenor saxophonist Sam Sanders. Visions, with Sanders saxophones out in front, features the powerful keyboard work of John Katalanic (electric piano, synthesizer, and mellotron), the incredible bassism of Ed Pickens, Jimmy Allen's solid, always imaginative drumming, and the recent addition of percussionist Sule, a student of Allen's dating back to the Metro-Arts Complex days, who alternated between traps and the more exotic percussion instruments, including a set of Chinese temple blocks, which added beautifully to the rhythmic mix on much of the material.

The music consisted of a number of Sanders' widely various, always interesting original compositions, many in the currently popular jazz/rock fusion pocket, plus bassist Pickens' tasty "Song for Sam." "Toke," the strongest performance of the afternoon, opened with a mystical mellotron motif, introduced Sam's soprano for the statement of the theme and a few smoking variations, slid into a dynamite electric piano solo by Katalanic (Bob Benoit was also present for this number, manipulating the mellotron at critical moments), and brought Sanders back for a scorching soprano solo–with both drummers pounding underneath him–before the song retreated all the way back to the haunting opening mellotron motif.

"Alee," a Sanders ballad dedicated to the saxophonist's wife, brought Sam's telling tenor to the fore. The Trane-like theme, beautifully reminiscent of the classic "Naima" in sound, articulation and feeling, led into a double-time middle section with Sanders demonstrating a strength of attack and improvisation which is rarely heard these days. The mellotron strings on the melody going out set off Sam's saxophone as perfectly as one could possibly want.

"Summer Mists," another Sanders original, generated a groovy pop feeling by virtue of Allen's heavy backbeat and more simulated strings on the theme statement. Sam's warmly powerful soprano spelled out the story of the summer mists over a sort of "Along the Trail" feeling before Sanders took up his tenor again to close the concert with an incredible up-tempo recital on Jimmy Allen's "Air Pockets."

Sam Sanders & Visions work around the Detroit area wherever they can find an opening for their unique, well-organized, powerfully presented original music. The band is a world-class musical organization, a real credit to the community in which it functions, and the Cranbrook people must be highly complimented for adding Visions to their excellent and hopefully ground-breaking series. In fact, let's hear it for the entire program, which presented Mixed Bag, the New McKinney's Cotton Pickers, Tribe, the Lyman Woodard Organization and the Sanders group in a warm, involving setting, at reasonable prices, and to a full house as well. All we can hope for now is, simply, more of the same.