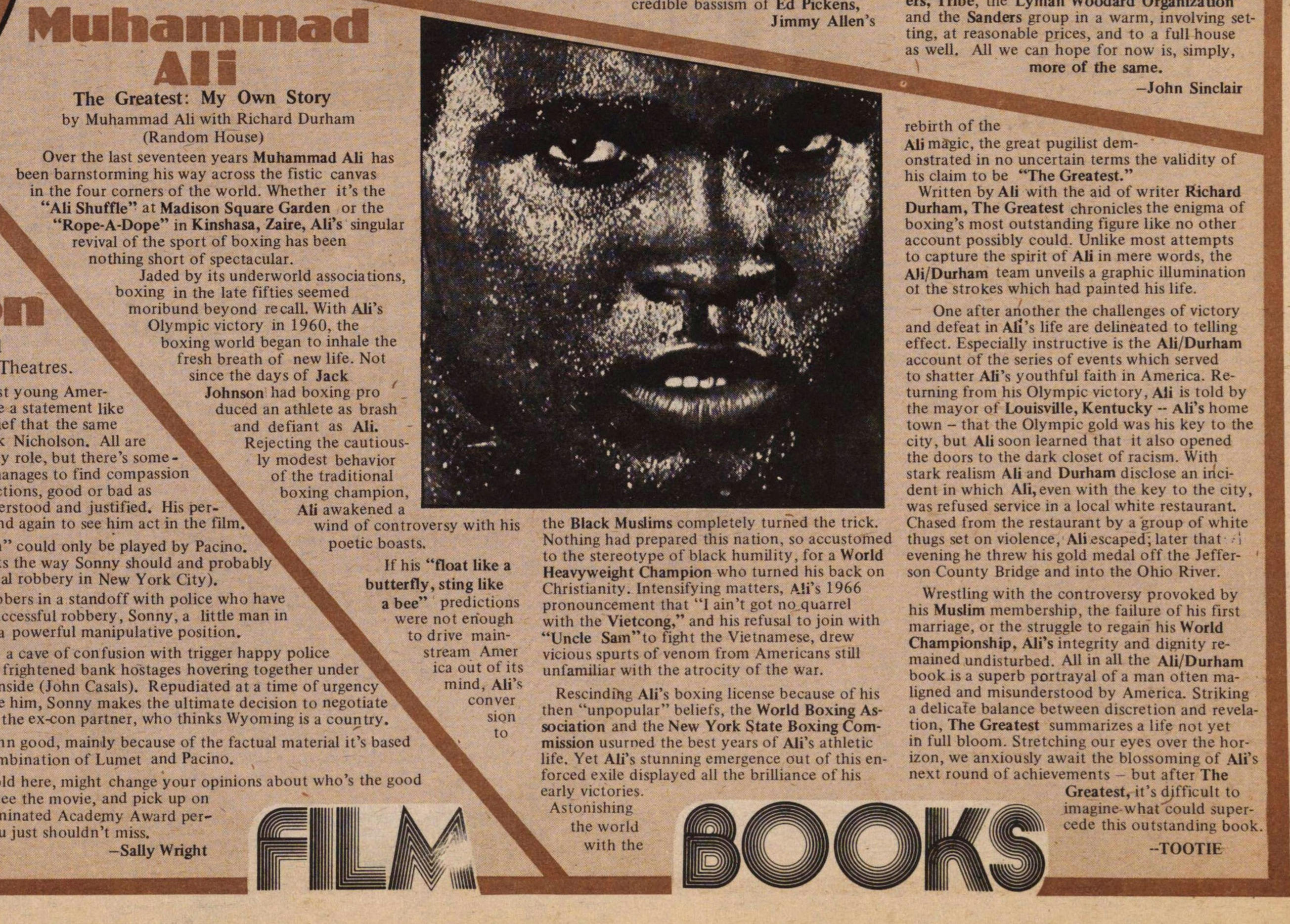 The Greatest: My Own Story

Over the last seventeen years Muhammad Ali has been barnstorming his way across the fistic canvas in the four corners of the world. Whether it's the "Ali Shuffle" at Madison Square Garden or the "Rope-A-Dope" in Kinshasa, Zaire, Ali's singular revival of the sport of boxing has been nothing short of spectacular.

Jaded by its underworld associations, boxing in the late fifties seemed moribund beyond recall. With Ali's Olympic victory in 1960, the boxing world began to inhale the fresh breath of new life. Not since the days of Jack  Johnson had boxing produced an athlete as brash and defiant as Ali. Rejecting the cautiously modest behavior of the traditional boxing champion, Ali awakened a wind of controversy with his poetic boasts.

If his "float like a butterfly, sting like a bee" predictions were not enough to drive mainstream America out of its mind, Ali's conversion the Black Muslims completely turned the trick. Nothing had prepared this nation, so accustomed to the stereotype of black humility, for a World Heavyweight Champion who turned his back on Christianity. Intensifying matters, Ali's 1966 pronouncement that "I ain't got no, quarrel with the Vietcong," and his refusal to join with "Uncle Sam" to fight the Vietnamese, drew vicious spurts of venom from Americans still unfamiliar with the atrocity of the war.

Rescinding Ali's boxing license because of his then "unpopular" beliefs, the World Boxing Association and the New York State Boxing Commission usurned the best years of Ali's athletic life. Yet Ali's stunning emergence out of this enforced exile displayed all the brilliance of his early victories. Astonishing the world with the rebirth of the Ali's magic, the great pugilist demonstrated in no uncertain terms the validity of his claim to be "The Greatest."

Written by Ali with the aid of writer Richard Durham, The Greatest chronicles the enigma of boxing's most outstanding figure like no other account possibly could. Unlike most attempts to capture the spirit of Ali in mere words, the Ali/Durham team unveils a graphic illumination ot the strokes which had painted his life.

One after another the challenges of victory and defeat in Ali's life are delineated to telling effect. Especially instructive is the Ali/Durham account of the series of events which served to shatter Ali's youthful faith ín America. Returning from his Olympic victory, Ali is told by the mayor of Louisville, Kentucky - Ali's home town - that the Olympic gold was his key to the city, but Ali soon learned that it also opened the doors to the dark closet of racism. With stark realism Ali and Durham disclose an incident in which Ali, even with the key to the city, I was refused service in a local white restaurant Chased from the restaurant by a group of white I thugs set on violence, Ali escaped; later that evening he threw his gold medal off the Jefferson County Bridge and into the Ohio River.

Wrestling with the controversy provoked by his Muslim membership, the failure of his first marriage, or the struggle to regain his World Championship. Ali's integrity and dignity remained undisturbed. All in all the Ali/Durham book is a superb portrayal of a man often maligned and misunderstood by America. Striking a delicate balance between discretion and revelation, The Greatest summarizes a life not yet in full bloom. Stretching our eyes over the horizon, we anxiously await the blossoming of Ali's next round of achievements - but after The Greatest, it's difficult to imagine what could I cede this outstanding book.