Public Radio At The Crossroads: The Struggle For WDET 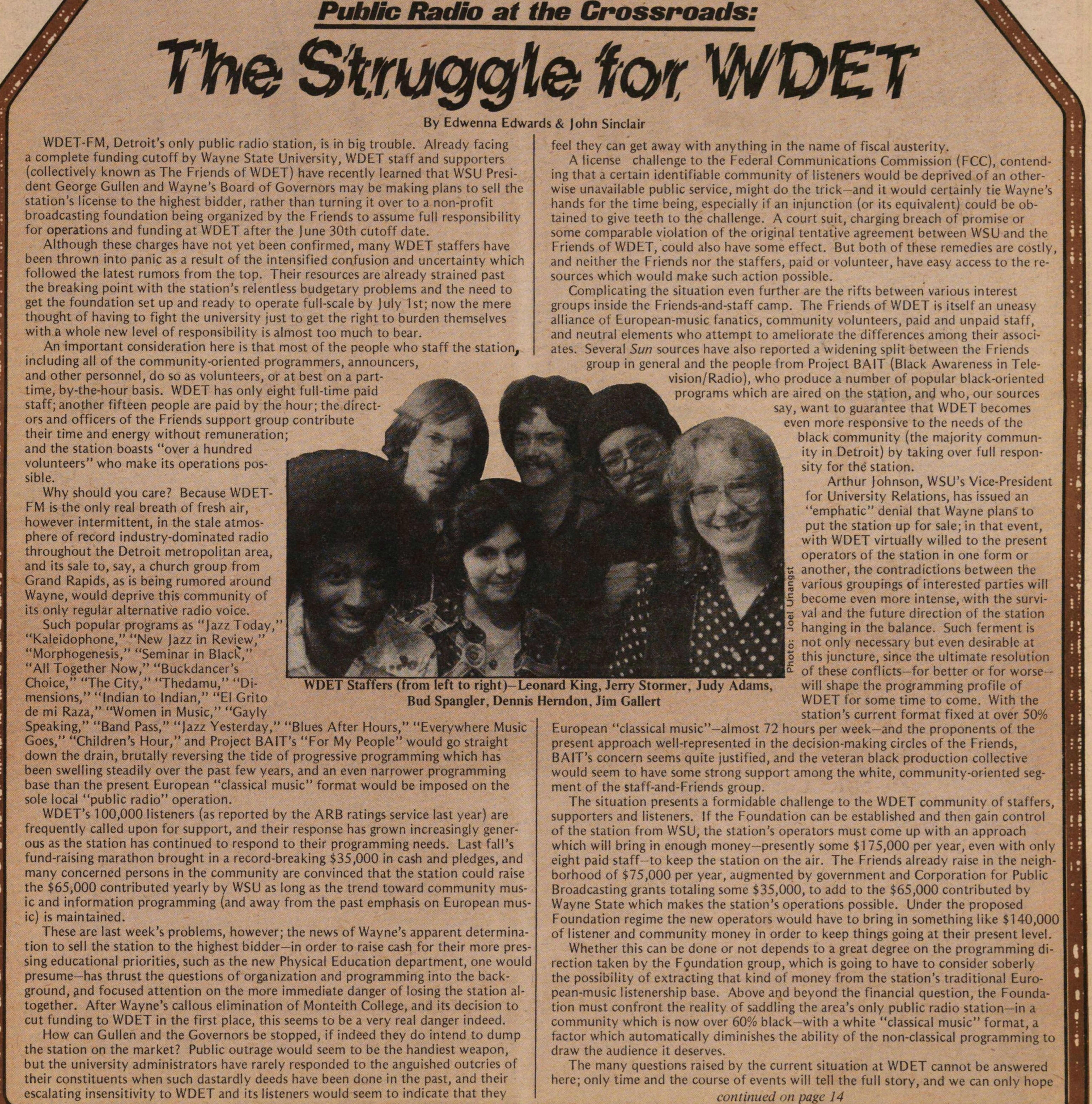 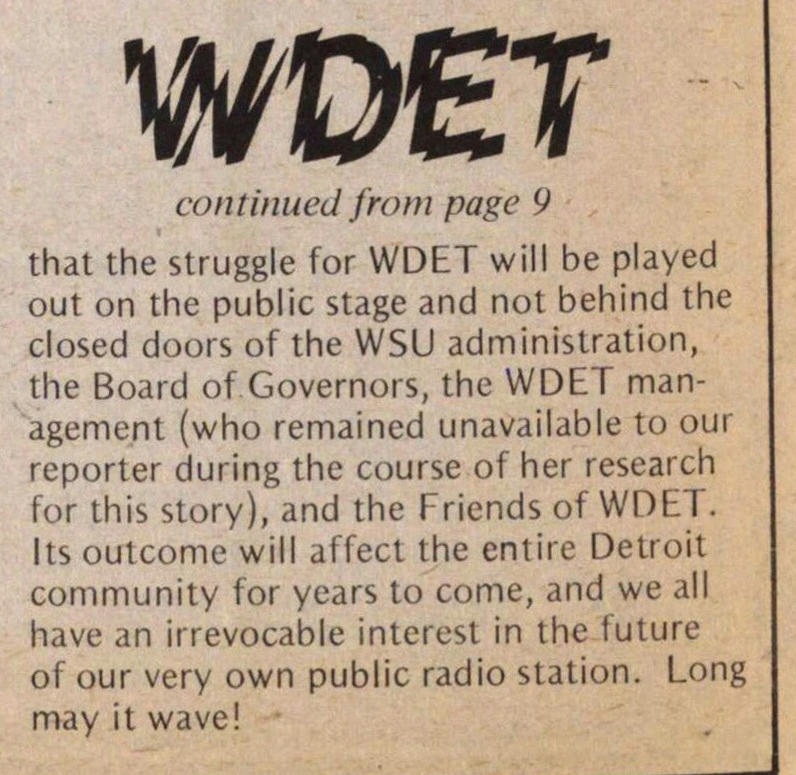 Public Radio at the Crossroads:

The Struggle for WDET

WDET-FM, Detroit's only public radio station, is in big trouble. Already facing a complete funding cutoff by Wayne State University, WDET staff and supporters (collectively known as The Friends of WDET) have recently learned that WSU President George Gullen and Wayne's Board of Governors may be making plans to sell the station's license to the highest bidder, rather than turning it over to a non-profit broadcasting foundation being organized by the Friends to assume full responsibility for operations and funding at WDET after the June 30th cutoff date.

Although these charges have not yet been confirmed, many WDET staffers have been thrown into panic as a result of the intensified confusion and uncertainty which followed the latest rumors from the top. Their resources are already strained past the breaking point with the station's relentless budgetary problems and the need to get the foundation set up and ready to operate full-scale by July 1st; now the mere thought of having to fight the university just to get the right to burden themselves with a whole new level of responsibility is almost too much to bear.

An important consideration here is that most of the people who staff the station. including all of the community-oriented programmers, announcers, and other personnel, do so as volunteers, or at best on a part-time, by-the-hour basis. WDET has only eight full-time paid staff; another fifteen people are paid by the hour; the directors and officers of the Friends support group contribute their time and energy without remuneration; and the station boasts "over a hundred volunteers" who make its operations possible.

Why should you care? Because WDET-FM is the only real breath of fresh air, however intermittent, in the stale atmosphere of record industry-dominated radio throughout the Detroit metropolitan area, and its sale to, say, a church group from Grand Rapids, as is being rumored around Wayne, would deprive this community of its only regular alternative radio voice.

Such popular programs as "Jazz Today," "Kaleidophone," "New jazz in Review," "Morphogenesis," "Seminar in Black," "All Together Now," "Buckdancer's Choice," "The City," "Thedamu," "Dimensions," "Indian to Indian," "El Grito de mi Raza," "Women in Music," "Gayly Speaking," "Band Pass," "Jazz Yesterday," "Blues After Hours," "Everywhere Music Goes," "Children's Hour," and Project BAIT's "For My People" would go straight down the drain, brutally reversing the tide of progressive programming which has been swelling steadily over the past few years, and an even narrower programming base than the present European "classical music" format would be imposed on the sole local "public radio" operation.

WDET's 100,000 listeners (as reported by the ARB ratings service last year) are frequently called upon for support, and their response has grown increasingly generous as the station has continued to respond to their programming needs. Last fall's fund-raising marathon brought in a record-breaking $35,000 in cash and pledges, and many concerned persons in the community are convinced that the station could raise the $65,000 contributed yearly by WSU as long as the trend toward community music and information programming (and away from the past emphasis on European music) is maintained.

These are last week's problems, however; the news of Wayne's apparent determination to sell the station to the highest bidder -- in order to raise cash for their more pressing educational priorities, such as the new Physical Education department, one would presume -- has thrust the questions of organization and programming into the background, and focused attention on the more immediate danger of losing the station altogether. After Wayne's callous elimination of Monteith College, and its decision to cut funding to WDET in the first place, this seems to be a very real danger indeed.

How can Gullen and the Governors be stopped, if indeed they do intend to dump the station on the market? Public outrage would seem to be the handiest weapon, but the university administrators have rarely responded to the anguished outcries of their constituents when such dastardly deeds have been done in the past, and their escalating insensitivity to WDET and its listeners would seem to indicate that they feel they can get away with anything in the name of fiscal austerity.

A lícense challenge to the Federal Communications Commission (FCC), contending that a certain identifiable community of listeners would be deprived of an otherwise unavailable public service, might do the trick -- and it would certainly tie Wayne's hands for the time being, especially if an injunction (or its equivalent) could be obtained to give teeth to the challenge. A court suit, charging breach of promise or some comparable violation of the original tentative agreement between WSU and the Friends of WDET, could also have some effect. But both of these remedies are costly, and neither the Friends nor the staffers, paid or volunteer, have easy access to the resources which would make such action possible.

Complicating the situation even further are the rifts between various interest groups inside the Friends-and-staff camp. The Friends of WDET is itself an uneasy alliance of European-music fanatics, community volunteers, paid and unpaid staff, and neutral elements who attempt to ameliorate the differences among their associates. Several Sun sources have also reported a widening split between the Friends group in general and the people from Project BAIT (Black Awareness in Television/Radio), who produce a number of popular black-oriented programs which are aired on the station, and who, our sources say, want to guarantee that WDET becomes even more responsive to the needs of the black community (the majority community n Detroit) by taking over full responsibility for the station.

Arthur Johnson, WSU's Vice-President for University Relations, has issued an "emphatic" denial that Wayne plans to put the station up for sale; in that event, with WDET virtually willed to the present operators of the station in one form or another, the contradictions between the various groupings of interested parties will become even more intense, with the survival and the future direction of the station hanging in the balance. Such ferment is not only necessary but even desirable at this juncture, since the ultimate resolution of these conflicts -- for better or for worse -- will shape the programming profile of WDET for some time to come. With the station 's current format fixed at over 50% European classical music -- almost 72 hours per week -- and the proponents of the present approach well-represented in the decision-making circles of the Friends, BAIT's concern seems quite justified, and the veteran black production collective would seem to have some strong support among the white, community-oriented segment of the staff-and-Friends group.

The situation presents a formidable challenge to the WDET community of staffers, supporters and listeners. If the Foundation can be established and then gain control of the station from WSU, the station's operators must come up with an approach which will bring in enough money -- presently some $175,000 per year, even with only eight paid staff to keep the station on the air. The Friends already raise in the neighborhood of $75,000 per year, augmented by government and Corporation for Public Broadcasting grants totaling some $35,000, to add to the $65,000 contributed by Wayne State which makes the station's operations possible. Under the proposed Foundation regime the new operators would have to bring in something like $140,000 of listener and community money in order to keep things going at their present level.

Whether this can be done or not depends to a great degree on the programming direction taken by the Foundation group, which is going to have to consider soberly the possibility of extracting that kind of money from the station's traditional European-music listenership base. Above and beyond the financial question, the Foundation must confront the reality of saddling the area's only public radio station -- in a community which is now over 60% black -- with a white "classical music" format, a factor which automatically diminishes the ability of the non-classical programming to draw the audience it deserves.

The many questions raised by the current situation at WDET cannot be answered here; only time and the course of events will tell the full story, and we can only hope

that the struggle for WDET will be played out on the public stage and not behind the closed doors of the WSU administration, the Board of Governors, the WDET management (who remained unavailable to our reporter during the course of her research for this story), and the Friends of WDET. Its outcome will affect the entire Detroit community for years to come, and we all have an irrevocable interest in the future of our very own public radio station. Long may it wave!