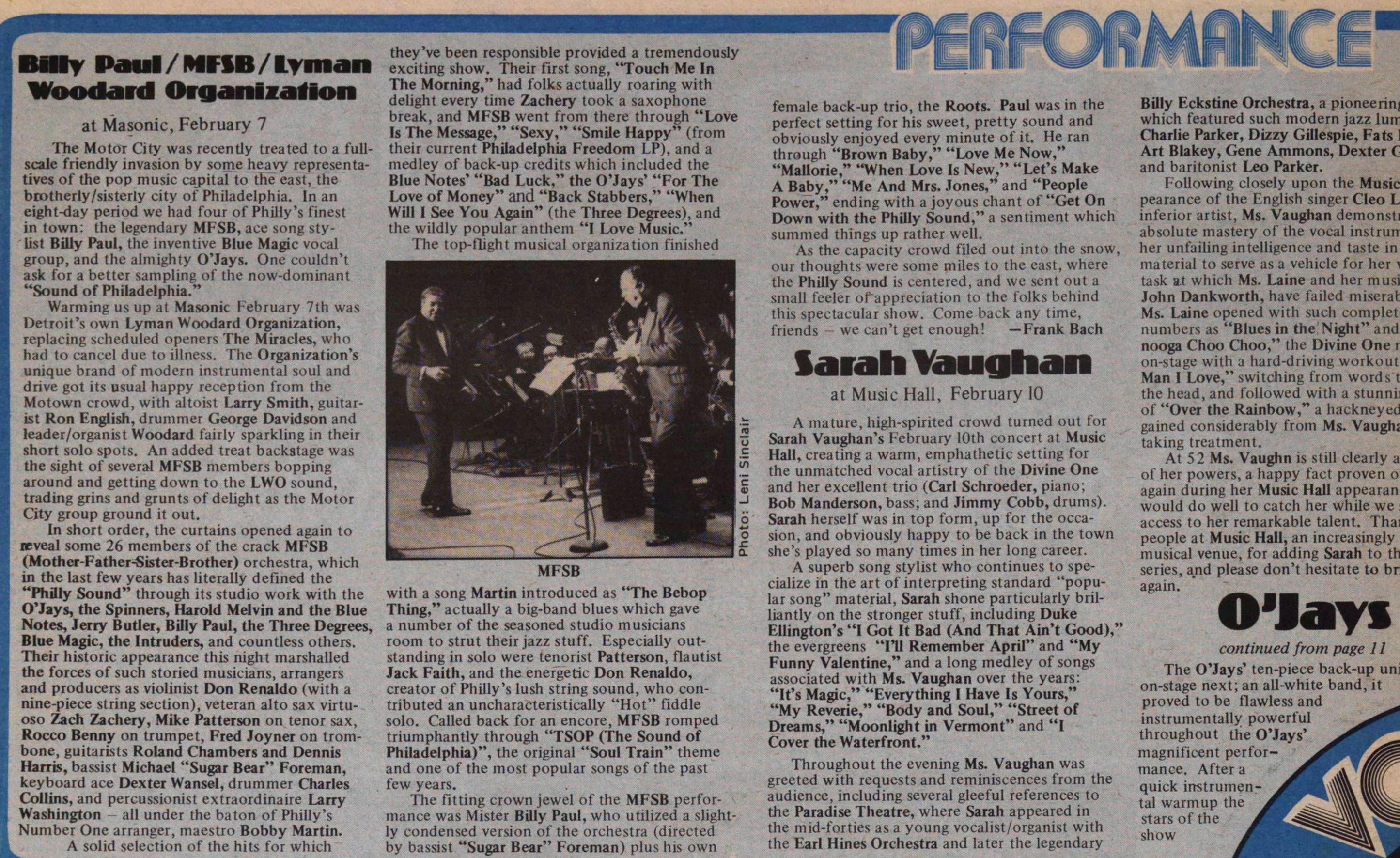 The Motor City was recently treated to a fullI-scale friendly invasion by some heavy representatives of the pop music capital to the east, the brotherly/sisterly city of Philadelphia. In an eight-day period we had four of Philly's finest in town: the legendary MFSB, ace song stylist Billy Paul, the inventive Blue Magic vocal group, and the almighty O'Jays. One couldn't ask for a better sampling of the now-dominant "Sound of Philadelphia."

Warming us up at Masonic February 7th was Detroit's own Lyman Woodard Organization, replacing scheduled openers The Miracles, who had to cancel due to illness. The Organization's unique brand of modern instrumental soul and drive got its usual happy reception from the Motown crowd, with altoist Larry Smith, guitarist Ron English, drummer George Davidson and leader/organist Woodard fairly sparkling in their short solo spots. An added treat backstage was the sight of several MFSB members bopping around and getting down to the LWO sound, trading grins and grunts of delight as the Motor City group ground it out.

In short order, the curtains opened again to reveal some 26 members of the crack MFSB (Mother-Father-Sister-Brother) orchestra, which in the last few years has literally defined the "Philly Sound" through its studio work with the O'Jays, the Spinners, Harold Melvin and the Blue Notes, Jerry Butler, Billy Paul, the Three Degrees, Blue Magic, the Intruders, and countless others. Their historic appearance this night marshaled the forces of such storied musicians, arrangers and producers as violinist Don Renaldo (with a nine-piece string section), veteran alto sax virtuoso Zach Zachery, Mike Patterson on tenor sax, Rocco Benny on trumpet, Fred Joyner on trombone, guitarists Roland Chambers and Dennis Harris, bassist Michael "Sugar Bear" Foreman, keyboard ace Dexter Wansel, drummer Charles Collins, and percussionist extraordinaire Larry Washington - all under the baton of Philly's Number One arranger, maestro Bobby Martin.

A solid selection of the hits for which they've been responsible provided a tremendously exciting show. Their first song, "Touch Me In The Morning," had folks actually roaring with delight every time Zachery took a saxophone break, and MFSB went from there through "Love Is The Message," "Sexy," "Smile Happy" (from their current Philadelphia Freedom LP), and a medley of back-up credits which included the Blue Notes' "Bad Luck," the O'Jays' "For The Love of Money" and "Back Stabbers," "When Will I See You Again" (the Three Degrees), and the wildly popular anthem "I Love Music."

The top-flight musical organization finished with a song Martin introduced as "The Bebop Thing," actually a big-band blues which gave a number of the seasoned studio musicians room to strut their jazz stuff. Especially outstanding in solo were tenorist Patterson, flautist Jack Faith, and the energetic Don Renaldo, creator of Philly's lush string sound, who contributed an uncharacteristically "Hot" fiddle solo. Called back for an encore, MFSB romped triumphantly through "TSOP (The Sound of Philadelphia)", the original "Soul Train" theme and one of the most popular songs of the past few years.

The fitting crown jewel of the MFSB performance was Mister Billy Paul, who utilized a slightly condensed version of the orchestra (directed by bassist "Sugar Bear" Foreman) plus his own female back-up trio, the Roots. Paul was in the perfect setting for his sweet, pretty sound and obviously enjoyed every minute of it. He ran through "Brown Baby," "Love Me Now," "Mallorie," "When Love Is New," "Let's Make A Baby," "Me And Mrs. Jones," and "People Power," ending with a joyous chant of "Get On Down with the Philly Sound," a sentiment which summed things up rather well.

As the capacity crowd filed out into the snow, our thoughts were some miles to the east, where the Philly Sound is centered, and we sent out a small feeler of appreciation to the folks behind this spectacular show. Come back any time, friends - we can't get enough!