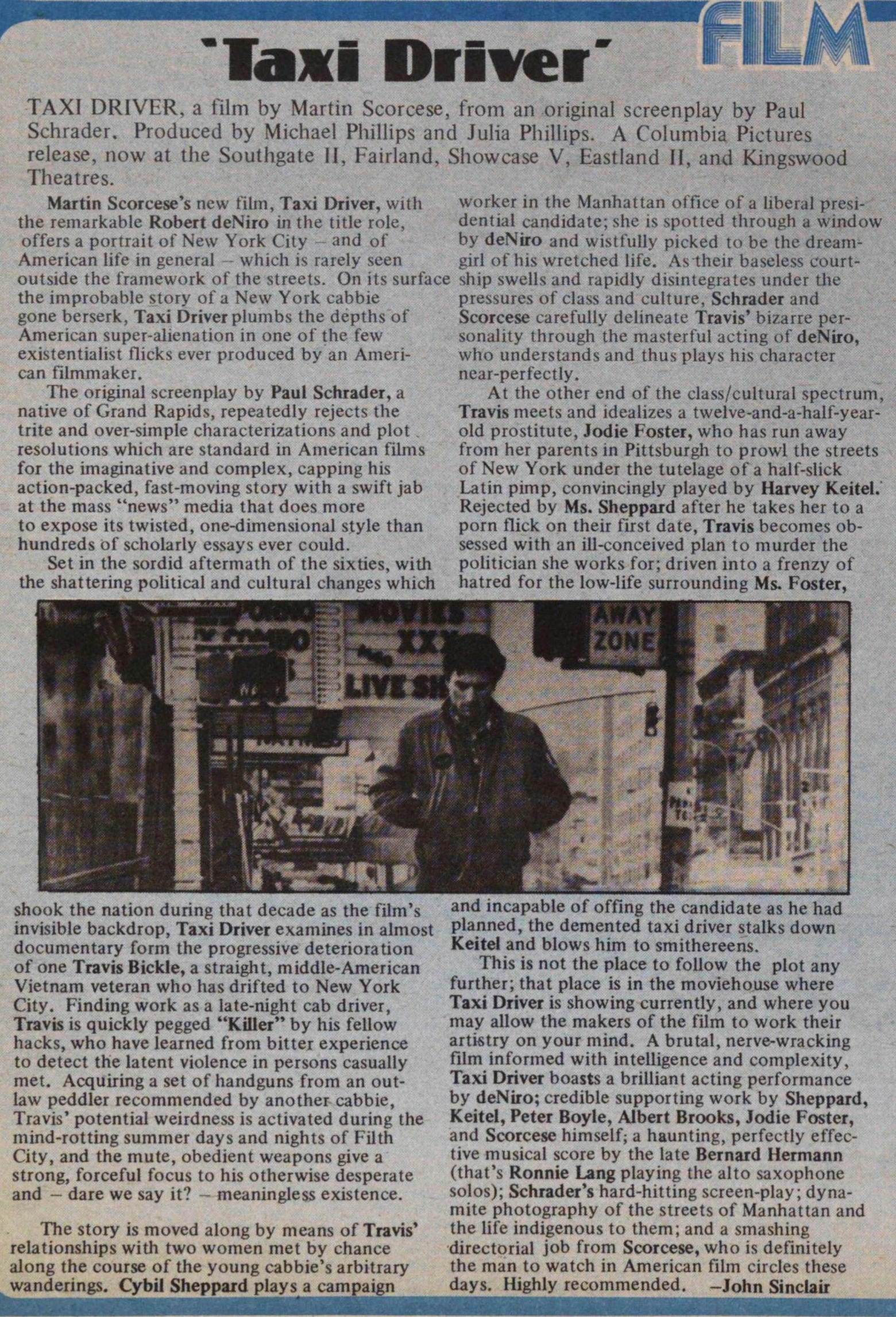 Martin Scorcese's new film, Taxi Driver, with the remarkable Robert deNiro in the title role, offers a portrait of New York City - and of American life in general - which is rarely seen outside the framework of the streets. On its surface the improbable story of a New York cabbie gone berserk, Taxi Driver plumbs the depths of American super-alienation in one of the few existentialist flicks ever produced by an American filmmaker.

The original screenplay by Paul Schrader, a native of Grand Rapids, repeatedly rejects the trite and over-simple characterizations and plot resolutions which are standard in American films for the imaginative and complex, capping his action-packed, fast-moving story with a swift jab at the mass "news" media that does more to expose its twisted, one-dimensional style than hundreds of scholarly essays ever could.

Set in the sordid aftermath of the sixties, with the shattering political and cultural changes which shook the nation during that decade as the film's invisible backdrop, Taxi Driver examines in almost documentary form the progressive deterioration of one Travis Bickle, a straight, middle-American Vietnam veteran who has drifted to New York City. Finding work as a late-night cab driver, Travis is quickly pegged "Killer" by his fellow hacks, who have learned from bitter experience to detect the latent violence in persons casually met. Acquiring a set of handguns from an outlaw peddler recommended by another cabbie, Travis' potential weirdness is activated during the mind-rotting summer days and nights of Filth City, and the mute, obedient weapons give a strong, forceful focus to his otherwise desperate and - dare we say it? - meaningless existence.

The story is moved along by means of Travis' relationships with two women met by chance along the course of the young cabbie's arbitrary wanderings. Cybil Sheppard plays a campaign worker in the Manhattan office of a liberal presidential candidate; she is spotted through a window by deNiro and wistfully picked to be the dream-girl of his wretched life. As their baseless courtship swells and rapidly disintegrates under the pressures of class and culture, Schrader and Scorcese carefully delineate Travis' bizarre personality through the masterful acting of deNiro, who understands and thus plays his character near-perfectly.

At the other end of the class/cultural spectrum. Travis meets and idealizes a twelve-and-a-half-year old prostitute, Jodie Foster, who has run away from her parents in Pittsburgh to prowl the streets of New York under the tutelage of a half-slick Latin pimp, convincingly played by Harvey Keitel. Rejected by Ms. Sheppard after he takes her to a porn flick on their first date, Travis becomes obsessed with an ill-conceived plan to murder the politician she works for; driven into a frenzy of hatred for the low-life surrounding Ms. Foster, and incapable of offing the candidate as he had planned, the demented taxi driver stalks down Keitel and blows him to smithereens.

This is not the place to follow the plot any further; that place is in the moviehouse where Taxi Driver is showing currently, and where you may allow the makers of the film to work their artistry on your mind. A brutal, nerve-wracking film informed with intelligence and complexity, Taxi Driver boasts a brilliant acting performance by deNiro; credible supporting work by Sheppard, Keitel, Peter Boyle, Albert Brooks, Jodie Foster, and Scorcese himself; a haunting, perfectly effective musical score by the late Bernard Hermann (that's Ronnie Lang playing the alto saxophone solos); Schrader's hard-hitting screen-play; dynamite photography of the streets of Manhattan and the life indigenous to them; and a smashing directorial job from Scorcese, who is definitely the man to watch in American film circles these days. Highly recommended.