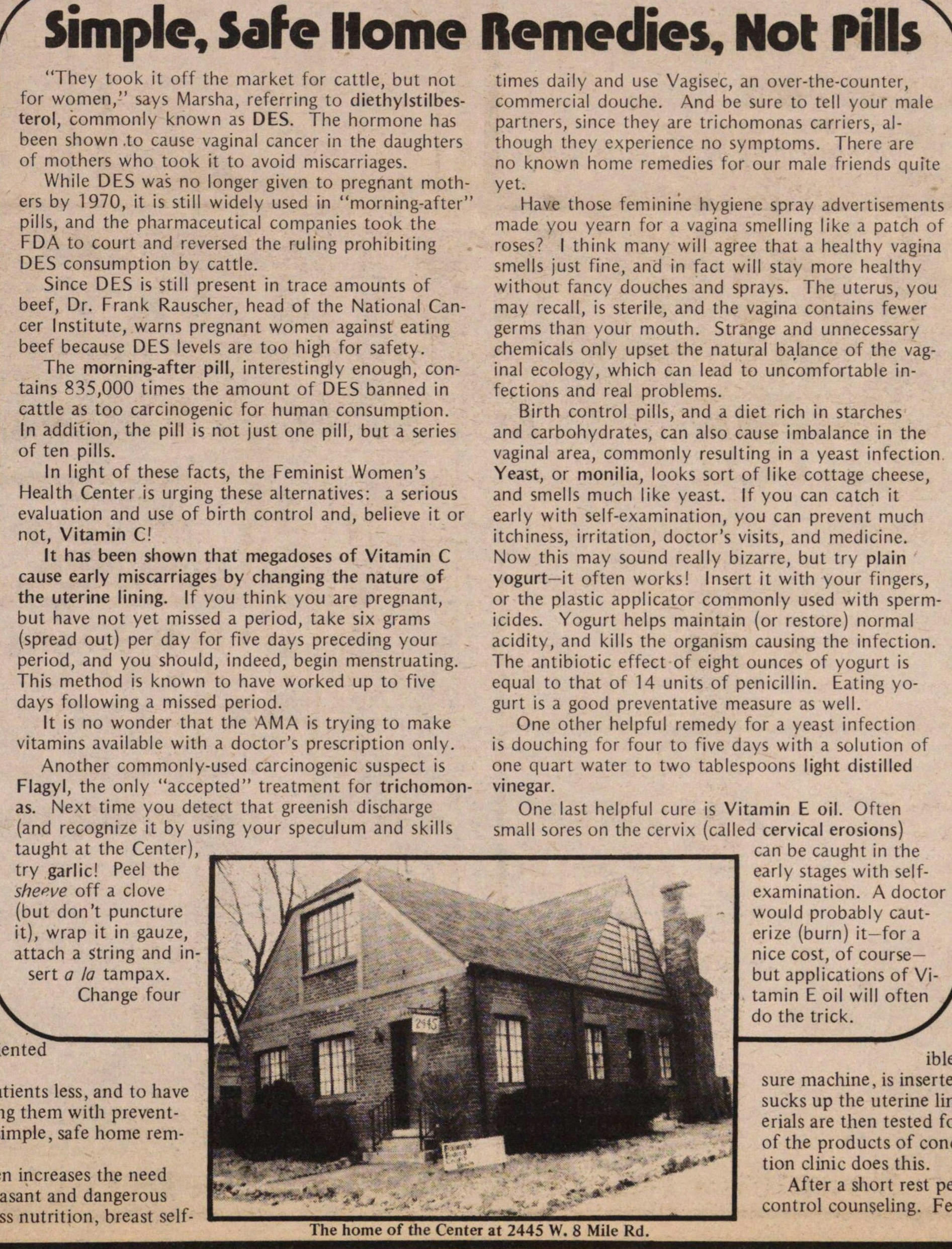 "They took it off the market for cattle, but not for women," says Marsha, referring to diethylstilbesterol, commonly known as DES. The hormone has been shown to cause vaginal cancer in the daughters of mothers who took it to avoid miscarriages.

While DES was no longer given to pregnant mothers by 1970, it is still widely used in "morning-after" pills, and the pharmaceutical companies took the FDA to court and reversed the ruling prohibiting DES consumption by cattle.

Since DES is still present in trace amounts of beef, Dr. Frank Rauscher, head of the National Cancer Institute, warns pregnant women against eating beef because DES levéis are too high for safety.

The morning-after pill, interestingly enough, contains 835,000 times the amount of DES banned in cattle as too carcinogenic for human consumption. In addition, the pill is not just one pill, but a series of ten pills.

In light of these facts, the Feminist Women's Health Center is urging these alternatives: a serious evaluation and use of birth control and, believe it or not, Vitamin C!

It has been shown that megadoses of Vitamin C cause early miscarriages by changing the nature of the uterine lining. If you think you are pregnant, but have not yet missed a period, take six grams (spread out) per day for five days preceding your period, and you should, indeed, begin menstruating. This method is known to have worked up to five days following a missed period.

It is no wonder that the AMA is trying to make vitamins available with a doctor's prescription only. Another commonly-used carcinogenic suspect is Flagyl, the only "accepted" treatment for trichomonas. Next time you detect that greenish discharge (and recognize it by using your speculum and skills taught at the Center), try garlic! Peel the sheeve off a clove (but don't puncture it), wrap it in gauze, attach a string and insert a la tampax.

Change four times daily and use Vagisec, an over-the-counter, commercial douche. And be sure to tell your male partners, since they are trichomonas carriers, although they experience no symptoms. There are no known home remedies for our male friends quite yet.

Have those feminine hygiene spray advertisements made you yearn for a vagina smelling like a patch of roses? I think many will agree that a healthy vagina smells just fine, and in fact will stay more healthy without fancy douches and sprays. The uterus, you may recall, is sterile, and the vagina contains fewer germs than your mouth. Strange and unnecessary chemicals only upset the natural balance of the vaginal ecology, which can lead to uncomfortable infections and real problems.

Birth control pills, and a diet rich in starches and carbohydrates, can also cause imbalance in the vaginal area, commonly resulting in a yeast infection. Yeast, or monilia, looks sort of like cottage cheese, and smells much like yeast. If you can catch it early with self-examination, you can prevent much itchiness, irritation, doctor's visits, and medicine. Now this may sound really bizarre, but try plain yogurt- it often works! Insert it with your fingers, or the plastic applicator commonly used with spermicides. Yogurt helps maintain (or restore) normal acidity, and kills the organism causing the infection. The antibiotic effect of eight ounces of yogurt is equal to that of 14 units of penicillin. Eating yogurt is a good preventative measure as well.

One other helpful remedy for a yeast infection is douching for four to five days with a solution of one quart water to two tablespoons light distilled vinegar.

One last helpful cure is Vitamin E oil. Often small sores on the cervix (called cervical erosions) can be caught in the early stages with self-examination. A doctor would probably cauterize (burn) it--- for a nice cost, of course--- but applications of Vitamin E oil will often do the trick.