What Can Be Done About Detroit's Abandoned Buildings? 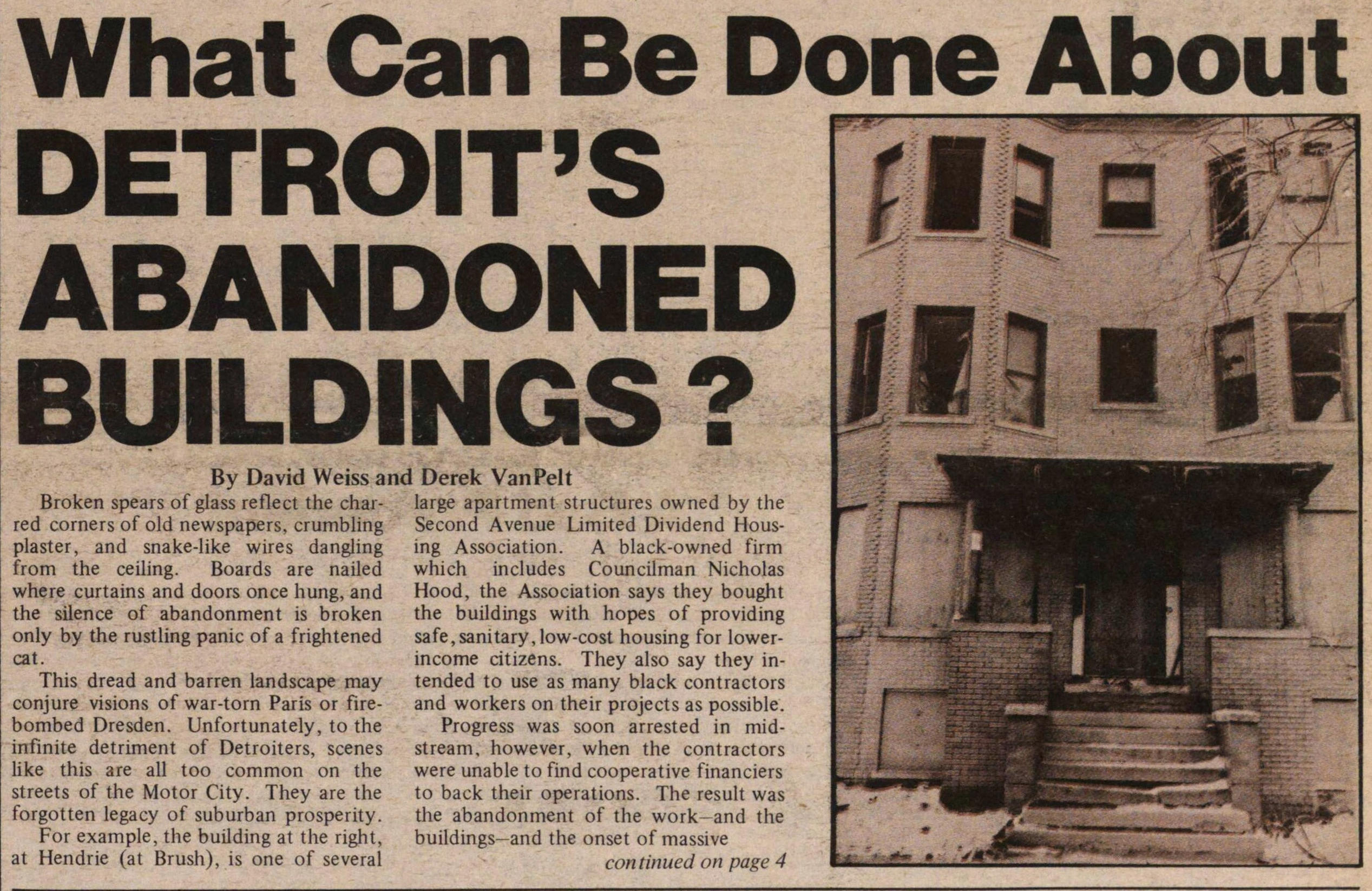 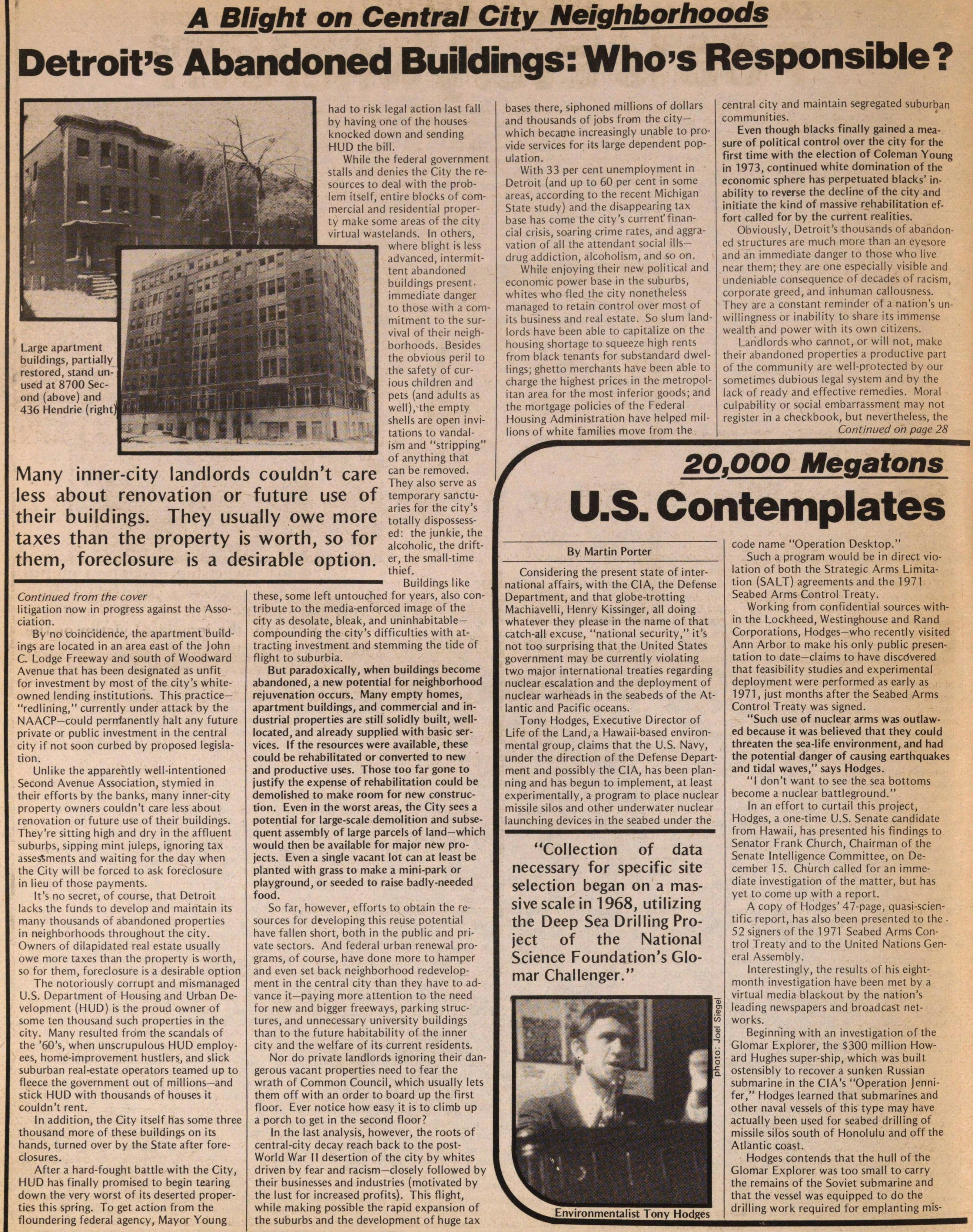 What Can Be Done About Detroit's Abandoned Buildings?

Broken spears of glass reflect the charred corners of old newspapers, crumbling plaster, and snake-like wires dangling from the ceiling. Boards are nailed where curtains and doors once hung, and the silence of abandonment is broken only by the rustling panic of a frightened cat.

This dread and barren landscape may conjure visions of war-torn Paris or firebombed Dresden. Unfortunately, to the infinite detriment of Detroiters, scenes like this are all too common on the streets of the Motor City. They are the forgotten legacy of suburban prosperity.

For example, the building at the right, at Hendrie (at Brush), is one of several large apartment structures owned by the Second Avenue Limited Dividend Housing Association. A black-owned firm which includes Councilman Nicholas Hood, the Association says they bought the buildings with hopes of providing safe,sanitary,low-cost housing for lowerincome citizens. They also say they intended to use as many black contractors and workers on their projects as possible.

Progress was soon arrested in midstream, however, when the contractors were unable to find cooperative financiers to back their operations. The result was the abandonment of the work- and the buildings- and the onset of massive litigation now in progress against the Association.

By no coincidence, the apartment buildings are located in an area east of the John C. Lodge Freeway and south of Woodward Avenue that has been designated as unfit for investment by most of the city's white owned lending institutions. This practice  "redlining," currently under attack by the NAACP-could permanently halt any future private or public investment in the central city if not soon curbed by proposed legislation.

Unlike the apparehtly well-intentioned Second Avenue Association, stymied in their efforts by the banks, many inner-city property owners couldn't care less about renovation or future use of their buildings. They're sitting high and dry in the affluent suburbs, sipping mint juleps, ignoring tax assessments and waiting for the day when the City will be forced to ask foreclosure in lieu of those payments.

It's no secret, of course, that Detroit lacks the funds to develop and maintain its many thousands of abandoned properties in neighborhoods throughout the city. Owners of dilapidated real estate usually owe more taxes than the property is worth, so for them, foreclosure is a desirable option.

The notoriously corrupt and mismanaged U.S. Department of Housing and Urban Development (HUD) is the proud owner of some ten thousand such properties in the city. Many resulted from the scandals of the '60's, when unscrupulous HUD employees, home-improvement hustlers, and slick suburban real-estate operators teamed up to fleece the government out of millions- and stick HUD with thousands of houses it couldn't rent.

In addition, the City itself has some three thousand more of these buildings on its hands, turned over by the State after foreclosures.

After a hard-fought battle with the City, HUD has finally promised to begin tearing down the very worst of its deserted properties this spring. To get action from the floundering federal agency, Mayor Young had to risk legal action last fall by having one of the houses knocked down and sending HUD the bill.

While the federal government stalls and denies the City the resources to deal with the problem itself, entire blocks of commercial and residential property make some areas of the city virtual wastelands. In others, where blight is less advanced, intermittent abandoned buildings present, immediate danger to those with a commitment to the survival of their neighborhoods. Besides the obvious peril to the safety of curious children and pets (and adults as well),the empty shells are open invitations to vandalism and "stripping" of anything that can be removed. They also serve as temporary sanctuaries for the city's totally dispossessed: the junkie, the alcoholic, the drifter, the small-time thief.

Buildings like these, some left untouched for years, also contribute to the media-enforced image of the city as desolate, bleak, and uninhabitable- compounding the city's difficulties with attracting investment and stemming the tide of flight to suburbia.

But paradoxically, when buildings become abandoned, a new potential for neighborhood rejuvenation occurs. Many empty homes, apartment buildings, and commercial and industrial properties are still solidly built, well located, and already supplied with basic services. If the resources were available, these could be rehabilitated or converted to new and productive uses. Those too far gone to justify the expense of rehabilitation could be demolished to make room for new construction. Even in the worst areas, the City sees a potential for large-scale demolition and subsequent assembly of large parcels of land- which would then be available for major new projects. Even a single vacant lot can at least be planted with grass to make a mini-park or playground, or seeded to raise badly-needed food.

So far, however, efforts to obtain the resources for developing this reuse potential have fallen short, both in the public and private sectors. And federal urban renewal programs, of course, have done more to hamper and even set back neighborhood redevelopment in the central city than they have to advance it- paying more attention to the need for new and bigger freeways, parking structures, and unnecessary university buildings than to the future habitability of the inner city and the welfare of its current residents.

Nor do private landlords ignoring their dangerous vacant properties need to fear the wrath of Common Council, which usually Iets them off with an order to board up the first floor. Ever notice how easy it is to climb up a porch to get in the second floor?

In the last analysis, however, the roots of central-city decay reach back to the post World War II desertion of the city by whites driven by fear and racism- closely followed by their businesses and industries (motivated by the lust for increased profits). This flight, while making possible the rapid expansion of the suburbs and the development of huge tax bases there, siphoned millions of dollars and thousands of jobs from the city which became increasingly unable to provide services for its large dependent population.

With 33 percent unemployment in Detroit (and up to 60 percent in some areas, according to the recent Michigan State study) and the disappearing tax base has come the city's current financial crisis, soaring crime rates, and aggravation of all the attendant social ills-drug addiction, alcoholism, and so on.

While enjoying their new political and economic power base in the suburbs, whites who fled the city nonetheless managed to retain control over most of its business and real estate. So slum landlords have been able to capitalize on the housing shortage to squeeze high rents from black tenants for substandard dwellings; ghetto merchants have been able to charge the highest prices in the metropolitan area for the most inferior goods; and the mortgage policies of the Federal Housing Administration have helped millions of white families move from the central city and maintain segregated suburban communities.

Even though blacks finally gained a measure of politica! control over the city for the first time with the election of Coleman Young in 1973, continued white domination of the economic sphere has perpetuated blacks' inability to reverse the decline of the city and initiate the kind of massive rehabilitation effort called for by the current realities.

Obviously, Detroit's thousands of abandoned structures are much more than an eyesore and an immediate danger to those who live near them; they are one especially visible and undeniable consequence of decades of racism, corporate greed, and inhuman callousness. They are a constant reminder of a nation's unwillingness or inability to share its immense wealth and power with its own citizens.

Laridlords who cannot, or will not, make their abandoned properties a productive part of the community are well-protected by our sometimes dubious legal system and by the lack of ready and effective remedies. Moral culpability or social embarrassment may not register in a checkbook, but nevertheless, the SUN in future issues intends to see that at least some of these landlords lose their anonymity. We will publish photographs and addresses of their properties, as well as owners' names, addresses, and tax payment records, and we will attempt to put owners on the record concerning their plans for these properties. While we harbor no illusions about appealing to the consciences of these people, we do hope to at least call them to public account and to push for positive action to arrest this blight on the neighborhoods of our central city- before it's too late.