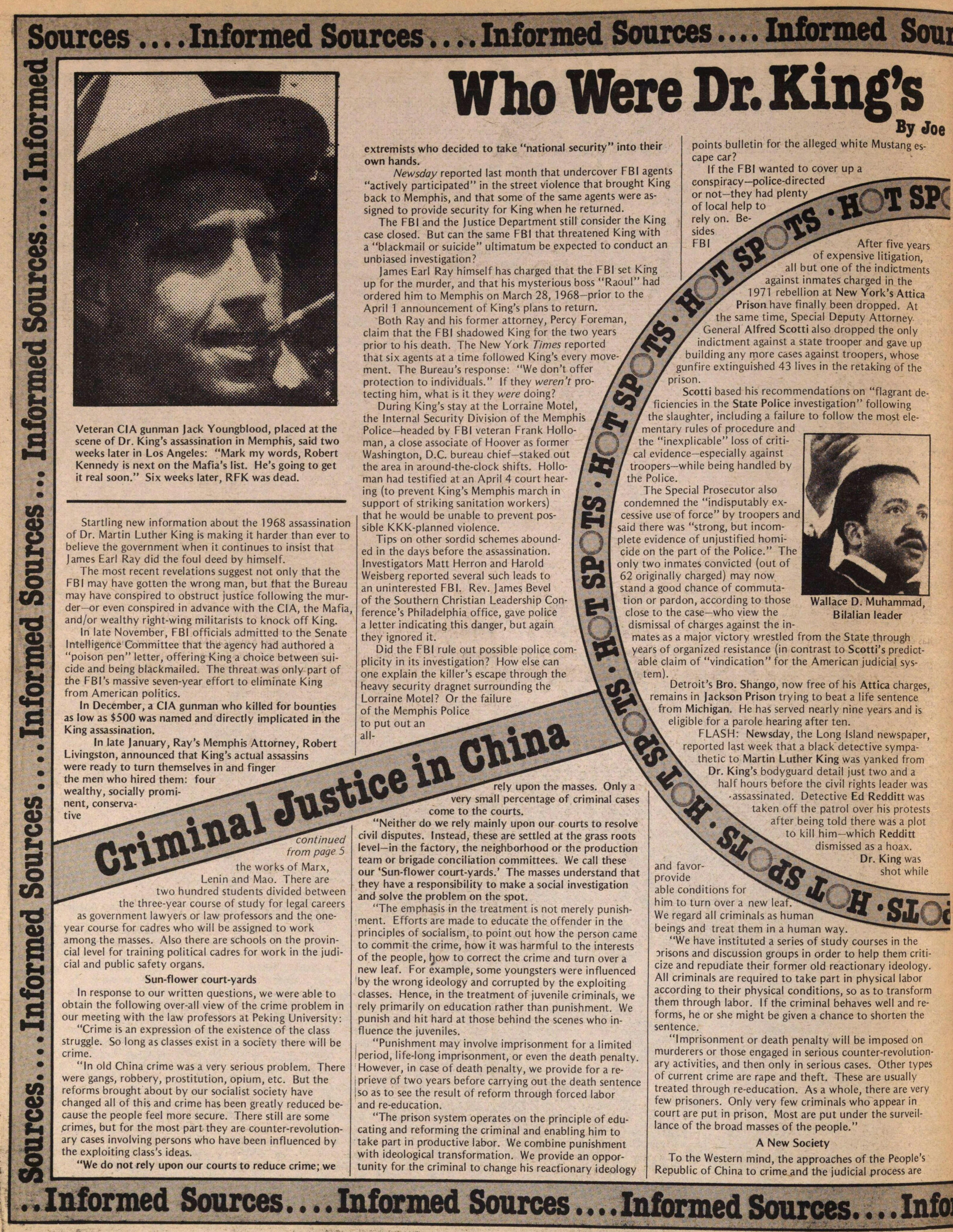 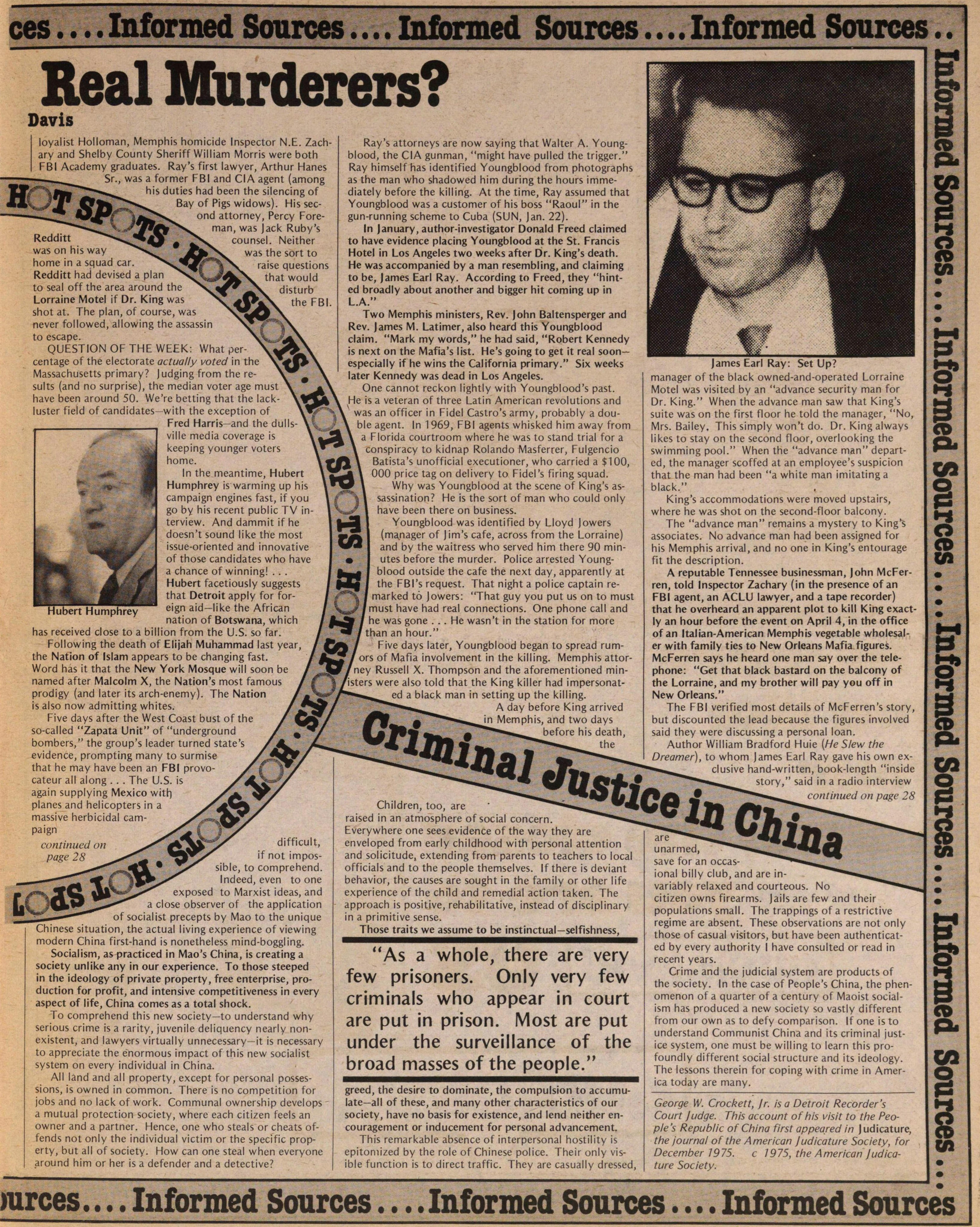 After five years of expensive litigation, all but one of the indictments against inmates charged in the 1971 rebellion at New York's Attica Prison have finally been dropped. At the same time, Special Deputy Attorney General Alfred Scotti also dropped the only indictment against a state trooper and gave up building any more cases against troopers, whose gunfire extinguished 43 lives in the retaking of the prison.

Scotti based his recommendations on "flagrant deficiencies in the State Police investigation following the slaughter, including a failure to follow the most rudimentary rules of procedure and the "inexplicable" loss of critical evidence – especially against troopers – while being handled by the Police.

The Special Prosecutor also condemned the "indisputably excessive use of force" by troopers and said there was "strong, but incomplete evidence of unjustified homicide on the part of the Police." The only two inmates convicted (out of 62 originally charged) may now stand a good chance of commutation or pardon, according to those close to the case – who view the dismissal of charges against the mates as a major victory wrestled from the State through years of organized resistance (in contrast to Scotti's predictable claim of "vindication" for the American judicial system).

Detroit's Bro. Shango, now free of his Attica charges, remains in Jackson Prison trying to beat a life sentence from Michigan. He has served nearly nine years and is eligible for a parole hearing after ten.

FLASH: Newsday, the Long Island newspaper, reported last week that a black detective sympathetic to Martin Luther King was yanked from Dr. King's bodyguard detail just two and a half hours before the civil rights leader was assassinated. Detective Ed Redditt was taken off the patrol over his protests after being told there was a plot to kill him – which Redditt dismissed as a hoax. Dr. King was shot while Redditt was on his way home in a squad car. Redditt had devised a plan to seal off the area around the Lorraine Motel if Dr. King was shot at. The plan, of course, was never followed, allowing the assassin to escape.

QUESTION OF THE WEEK: What percentage of the electorate actually voted in the Massachusetts primary? Judging from the results (and no surprise), the median voter age must have been around 50. We're betting that the lackluster field of candidates – with the exception of Fred Harris – and the dullsville media coverage is keeping younger voters home.

In the meantime, Hubert Humphrey is warming up his campaign engines fast, if you go by his recent public TV interview. And dammit if he doesn't sound like the most issue-oriented and innovative of those candidates who have a chance of winning! . . . Hubert facetiously suggests that Detroit apply for foreign aid – like the African nation of Botswana, which has received close to a billion from the U.S. so far.

Following the death of Elijah Muhammad last year, the Nation of Islam appears to be changing fast. Word has it that the New York Mosque will soon be named after Malcolm X, the Nation's most famous prodigy (and later its arch-enemy). The Nation is also now admitting whites.

Five days after the West Coast bust of the so-called "Zapata Unit" of "underground bombers," the group's leader turned state's evidence, prompting many to surmise that he may have been an FBI provocateur all along . . . The U.S. is again supplying Mexico with planes and helicopters in a massive herbicidal campaign