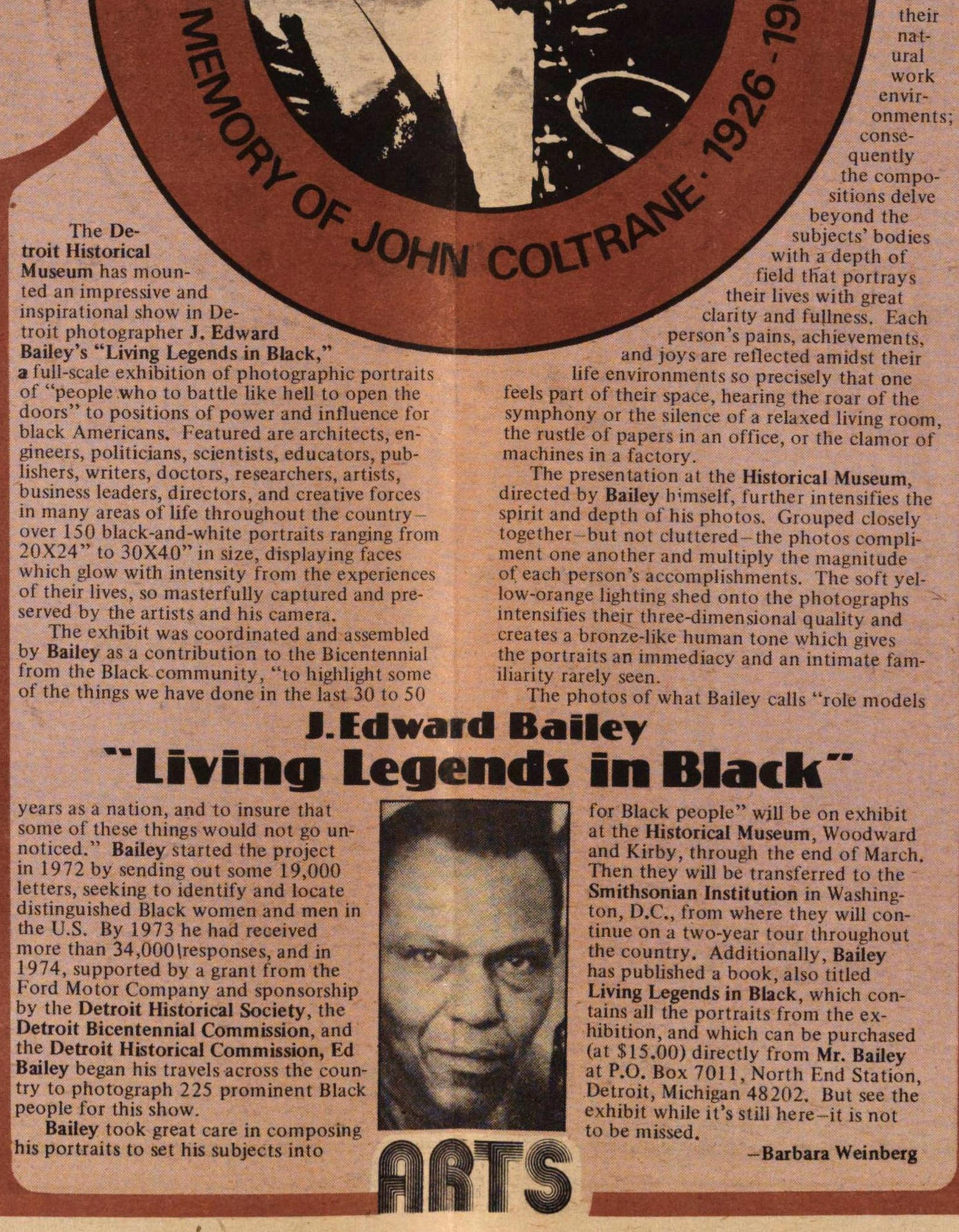 The Detroit Historical Museum has mounted an impressive and inspirational show in Detroit photographer J. Edward Bailey's "Living Legends in Black," a full-scale exhibition of photographic portraits of "people who to battle like hell to open the doors" to positions of power and influence for black Americans. Featured are architects, engineers, politicians, scientists, educators, publishers, writers, doctors, researchers, artists, business leaders, directors, and creative forces in many areas of life throughout the country - over 150 black-and-white portraits ranging from 20X24" to 30X40" in size, displaying faces which glow with intensity from the experiences of their lives, so masterfully captured and preserved by the artists and his camera.

The exhibit was coordinated and assembled by Bailey as a contribution to the Bicentennial from the Black community, "to highlight some of the things we have done in the last 30 to 50 years as a nation, and to insure that some of these things would not go unnoticed." Bailey started (he project in 1972 by sending out some 19,000 letters, seeking to identify and locate distinguished Black women and men in the U.S. By 1973 he had received more than 34,000 responses, and in 1974, supported by a grant from the Ford Motor Company and sponsorship by the Detroit Historical Society, the Detroit Bicentennial Commission, and the Detroit Historical Commission, Ed Bailey began his travels across the country to photograph 225 prominent Black people for this show.

Bailey took great care in composing his portraits to set his subjects into their natural work environments; consequently the compositions delve beyond the subjects' bodies with a depth of field that portrays their lives with great clarity and fullness. Each person's pains, achievements, and joys are reflected amidst their life environments so precisely that one feels part of their space, hearing the roar of the symphony or the silence of a relaxed living room, the rustle of papers in an office, or the clamor of machines in a factory.

The presentation at the Historical Museum, directed by Bailey himself, further intensifies the spirit and depth of his photos. Grouped closely together but not cluttered-the photos compliment one another and multiply the magnitude of each person's accomplishments. The soft yellow-orange lighling shed onto the photographs intensifies their three-dimensional quality and creates a bronze-like human tone which gives the portraits an immediacy and an intímate familiarity rarely seen.

The photos of what Bailey calls "role models for Black people will be on exhibit at the Historical Museum, Woodward and Kirby, through the end of March. Then they will be transferred to the Smithsonian Institution in Washington, D.C., from where they will continue on a two-year tour throughout the country. Additionally, Bailey has published a book, also titled Living Legends in Black, which contains all the portrails from the exhibition, and which can be purchased (at $15.00) directly from Mr. Bailey at P.O. Box 7011, North End Station Detroit, Michigan 48202. But see the exhibit while it's still here-it is not to be missed.