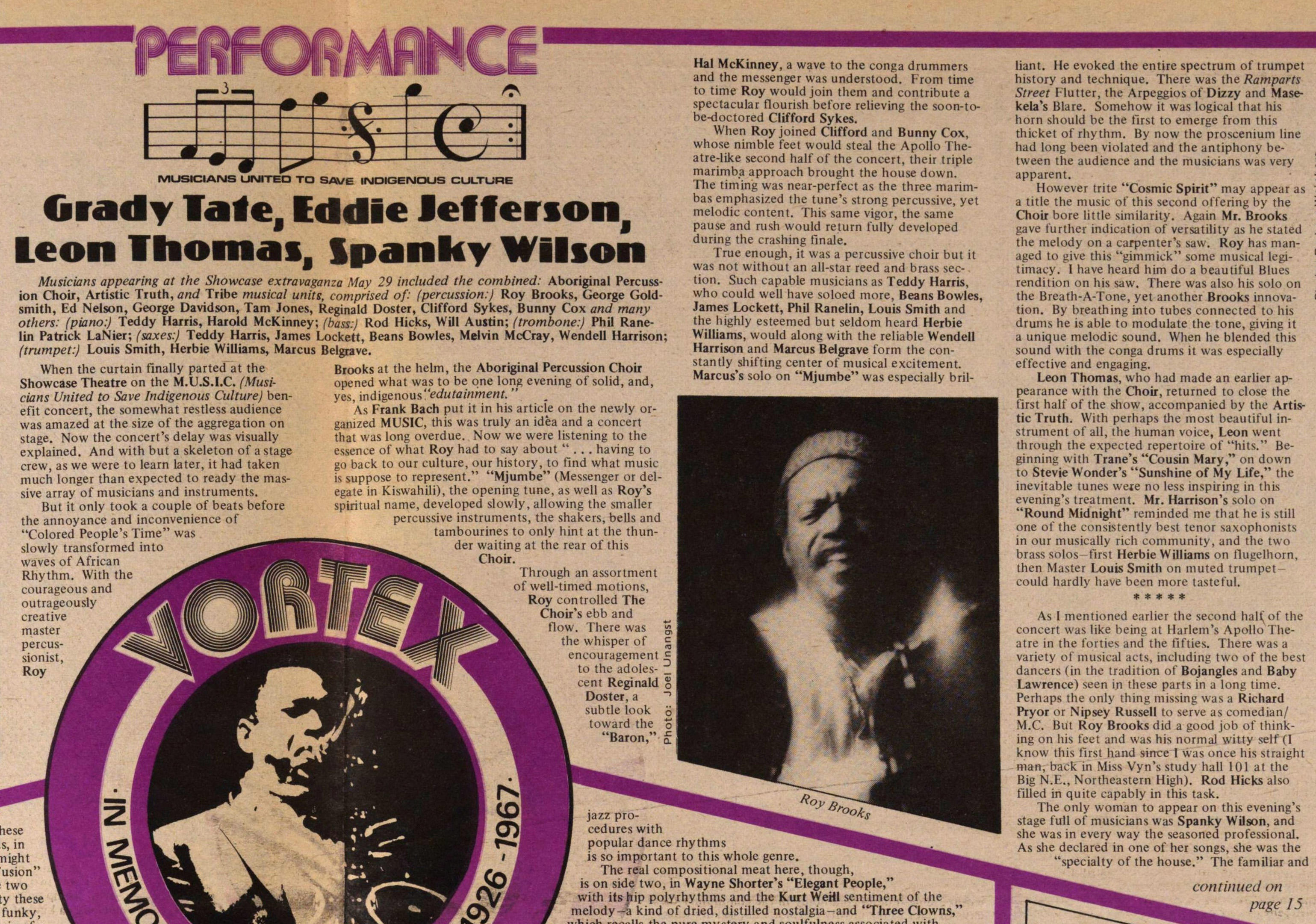 MUSICIANS UNITED TO SAVE INDIGENOUS CULTURE

When the curtain finally parted at the Showcase Theatre on the M.U.S.I.C. (Musicians United to Save Indigenous Culture) benefit concert, the somewhat restless audience was amazed at the size of the aggregation on stage. Now the concert's delay was visually explained.
And with but a skeleton of a stage crew, as we were to learn later, it had taken much longer than expected to ready the massive array of musicians and instruments. But it only took a couple of beats before the annoyance and inconvenience of "Colored People's Time" was slowly transformed into waves of African Rhythm. With the courageous and outrageously Creative master percussionist, Roy Brooks at the helm, the Aboriginal Percussion Choir opened what was to be one long evening of solid, and, yes, indigenous "edutainment."

As Frank Bach put it in his article on the newly organized MUSIC, this was truly an idea and a concert that was long overdue. Now we were listening to the essence of what Roy had to say about "... having to go back to our culture, our history, to find what music is suppose to represent." "Mjumbe" (Messenger or delegate in Kiswahili), the opening tune, as well as Roy's spiritual name, developed slowly, allowing the smaller percussive instruments, the shakers, bells and tambourines to only hint at the thunder waiting at the rear of this Choir.

Through an assortment of well-timed motions. Roy controlled The Choir's ebb and flow. There was the whisper of encouragement to the adolescent Reginald Doster, a subtle look toward the "Baron," Hal McKinney, a wave to the conga drummers and the messenger was understood. From time to time Roy would join them and contribute a spectacular flourish before relieving the soon-to-be-doctored Clifford Sykes.

When Roy joined Clifford and Bunny Cox, whose nimble feet would steal the Apollo Theatre-like second half of the concert, their triple marimba approach brought the house down. The timing was near-perfect as the three marimbas emphasized the tune's strong percussive, yet melodic content. This same vigor, the same pause and rush would return fully developed during the crashing finale.

True enough, it was a percussive choir hut it was not without an all-star reed and brass section. Such capable musicians as Teddy Harris, who could well have soloed more, Beans Bowles, James Lockett, Phil Ranelin, Louis Smith and the highly esteemed but seldom heard Herbie Williams, would along with the reliable Wendell Harrison and Marcus Belgrave form the constantly shifting center of musical excitement. Marcus's solo on "Mjumbe" was especially brilliant. He evoked the entire spectrum of trumpet history and technique.
There was the Ramparts Street Flutter, the Arpeggios of Dizzy and Masekela's Blare. Somehow it was logical that his horn should be the first to emerge from this thicket of rhythm. By now the proscenium line had long been violated and the antiphony between the audience and the musicians was very apparent.

However trite "Cosmic Spirit" may appear as a title the music of this second offering by the Choir bore little similarity. Again Mr. Brooks gave further indication of versatility as he stated the melody on a carpenter's saw. Roy has managed to give this "gimmick" some musical legitimacy. I have heard him do a beautiful Blues rendition on his saw. There was also his solo on the Breath-A-Tone, yet another Brooks innovation. By breathing into tubes connected to his drums he is able to modulate the tone, giving it a unique melodic sound. When he blended this sound with the conga drums it was especially effective and engaging.

Leon Thomas, who had made an earlier appearance with the Choir, returned to close the first half of the show, accompanied by the Artistic Truth. With perhaps the most beautiful instrument of all, the human voice, Leon went through the expected repertoire of "hits."
Beginning with Trane's "Cousin Mary," on down to Stevie Wonder 's "Sunshine of My Life," the inevitable tunes were no less inspiring in this evening's treatment. Mr. Harrison's solo on "Round Midnight" reminded me that he is still one of the consistently best tenor saxophonists in our musically rich community, and the two brass solos - first Herbie Williams on flugelhorn, then Master Louis Smith on muted trumpet could hardly have been more tasteful.

As I mentioned earlier the second half, of the concert was like being at Harlem's Apollo Theatre in the forties and the fifties. There was a variety of musical acts, including two of the best dancers (in the tradition of Bojangles and Baby Lawrence) seen in these parts in a long time. Perhaps the only thing missing was a Richard Pryor or Nipsey Russell to serve as comedian/M.C. But Roy Brooks did a good job of thinking on his feet and was his normal witty self (I know this first hand since I was once his straight man, back in Miss Vyn's study hall 101 at the Big N.E., Northeastern High). Rod Hicks also filled in quite capably in this task.

The only woman to appear on this evening's stage full of musicians was Spanky Wilson, and she was in every way the seasoned professional. As she declared in one of her songs, she was the "specialty of the house." The familiar and