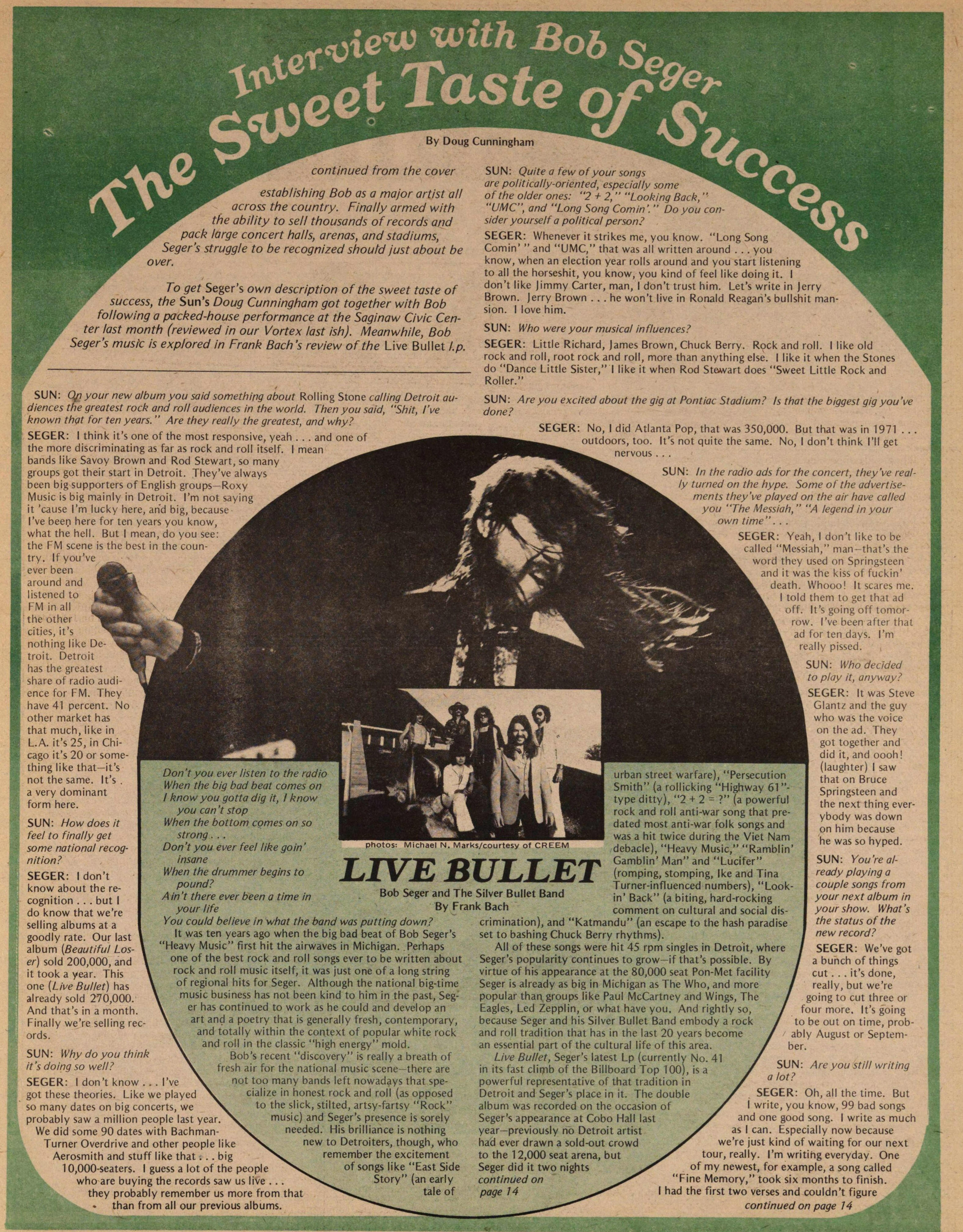 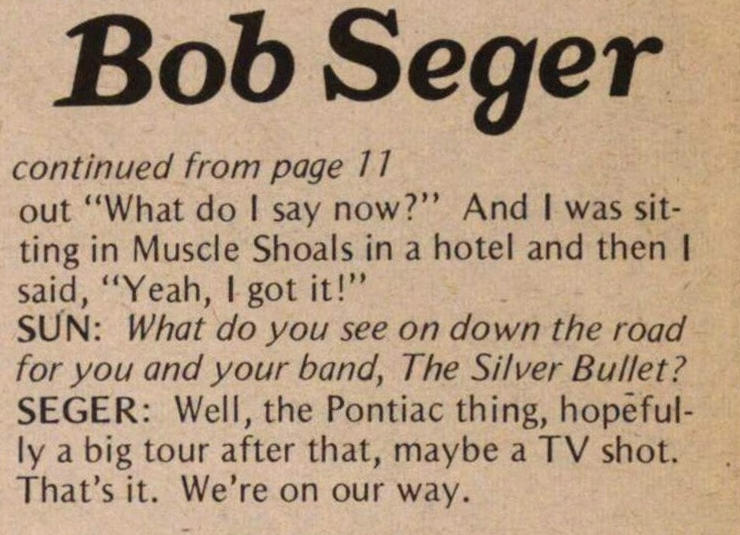 establishing Bob as a major artist all across the country. Finally armed with the ability to sell thousands of records and pack large concert halls, arenas, and stadiums, Seger's struggle to be recognized should just about be over.

To get Seger's own description of the sweet taste of success, the Sun's Doug Cunningham got together with Bob following a packed-house performance at the Saginaw Civic Center last month (reviewed in our Vortex last ish). Meanwhile, Bob Seger's music is explored in Frank Bach's review of the Live Bullet l.p.

SUN: Of your new album you said something about Rolling Stone calling Detroit audiences the greatest rock and roll audiences in the world. Then you said, "Shit, I've known that for ten years." Are they really the greatest, and why?

SEGER: I think it's one of the most responsive, yeah . . . and one of the more discriminating as far as rock and roll itself. I mean bands like Savoy Brown and Rod Stewart, so many groups got their start in Detroit. They've always been big supporters of English groups – Roxy Music is big mainly in Detroit, I'm not saying it cause I'm lucky here, and big, because I've been here for ten years you know, what the hell. But I mean, do you see: the FM scene is the best in the country. If you’ve ever been around and listened to FM in all the other cities, it's nothing like Detroit. Detroit has the greatest share of radio audience for FM. They have 41 percent. No other market has that much, like in L.A. it's 25, in Chicago it's 20 or something like that – It's not the same. It's a very dominant form here.

SUN: How does it feel to finally get some national recognition?

SEGER: I don't know about the recognition . . . but I do know that we're selling albums at a goodly rate. Our last album (Beautiful Loser) sold 200,000, and it took a year. This I one (Live Bullet) has already sold 270,000. And that's in a month. Finally we're selling records.

SUN: Why do you think it's doing so well?

SEGER: I don't know . . . I've got these theories. Like we played so many dates on big concerts, we probably saw a million people last year. We did some 90 dates with Turner Overdrive and other people like Aerosmith and stuff like that . . . big 10,000-seaters. I guess a lot of the people who are buying the records saw us live . . . they probably remember us more from that than from all our previous albums.

SUN: Quite a few of your songs are politically-oriented, especially some of the older ones: "2 + 2," "Looking Back," "UMC", and "Long Song Comin '. " Do you consider yourself a political person?

SEGER: Whenever it strikes me, you know. "Long Song Comin'" and "UMC," that was all written around . . . you know, when an election year rolls around and you start listening to all the horseshit, you know, you kind of feel like doing it. I don't like Jimmy Carter, man, I don't trust him. Let's write in Jerry Brown. Jerry Brown . . . he won't live in Ronald Reagan's bullshit mansion. I love him.

SUN: Who were your musical influences

SUN: Are you excited about the gig at Pontiac Stadium? Is that the biggest gig you've done?

SUN: In the radio ads for the concert, they've really turned on the hype. Some of the advertisements they've played on the air have called you "The Messiah," "A legend in your own time" . . .

SEGER: Yeah, I don't like to be called "Messiah," man – that's the word they used on Springsteen and it was the kiss of fuckin' death. Whooo! It scares me. I told them to get that ad off. It's going off now. I've been after that ad for ten days. I'm really pissed.

SUN: Who decided to play it, anyway?

SEGER: It was Steve Glantz and the guy who was the voice on the ad. They got together and did it, and oooh! (laughter) I saw that on Bruce Springsteen and the next thing everybody was down on him because he was so hyped.

SUN: You're already playing a couple songs from your next album in your show. What's the status of the new record?

SEGER: We've got a bunch of things cut . . . it's done, really, but we're going to cut three or four more. It's going to be out on time, probably August or September.

SUN: Are you still writing a lot?

SEGER: Oh, all the time. But I write, you know, 99 bad songs and one good song. I write as much as I can. Especially now because we're just kind of waiting for our next tour, really. I'm writing everyday. One of my newest, for example, a song called "Fine Memory," took six months to finish. I had the first two verses and couldn't figure

out "What do I say now?" And I was sitting in Muscle Shoals in a hotel and then I said, "Yeah, I got it!"

SUN: What do you see on down the road for you and your band, The Silver Bullet?

SEGER: Well, the Pontiac thing, hopefully a big tour after that, maybe a TV shot. That's it. We're on our way.