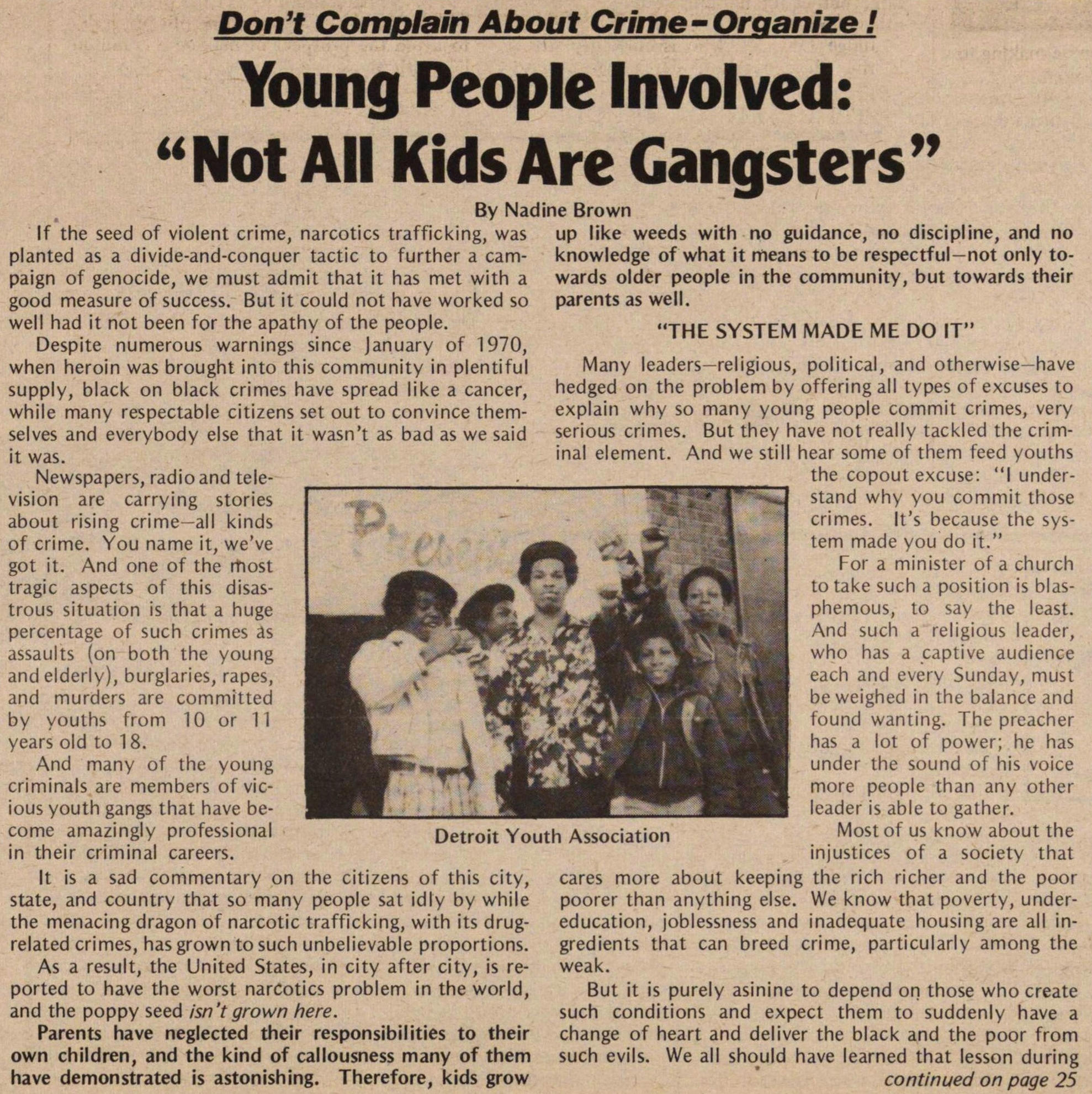 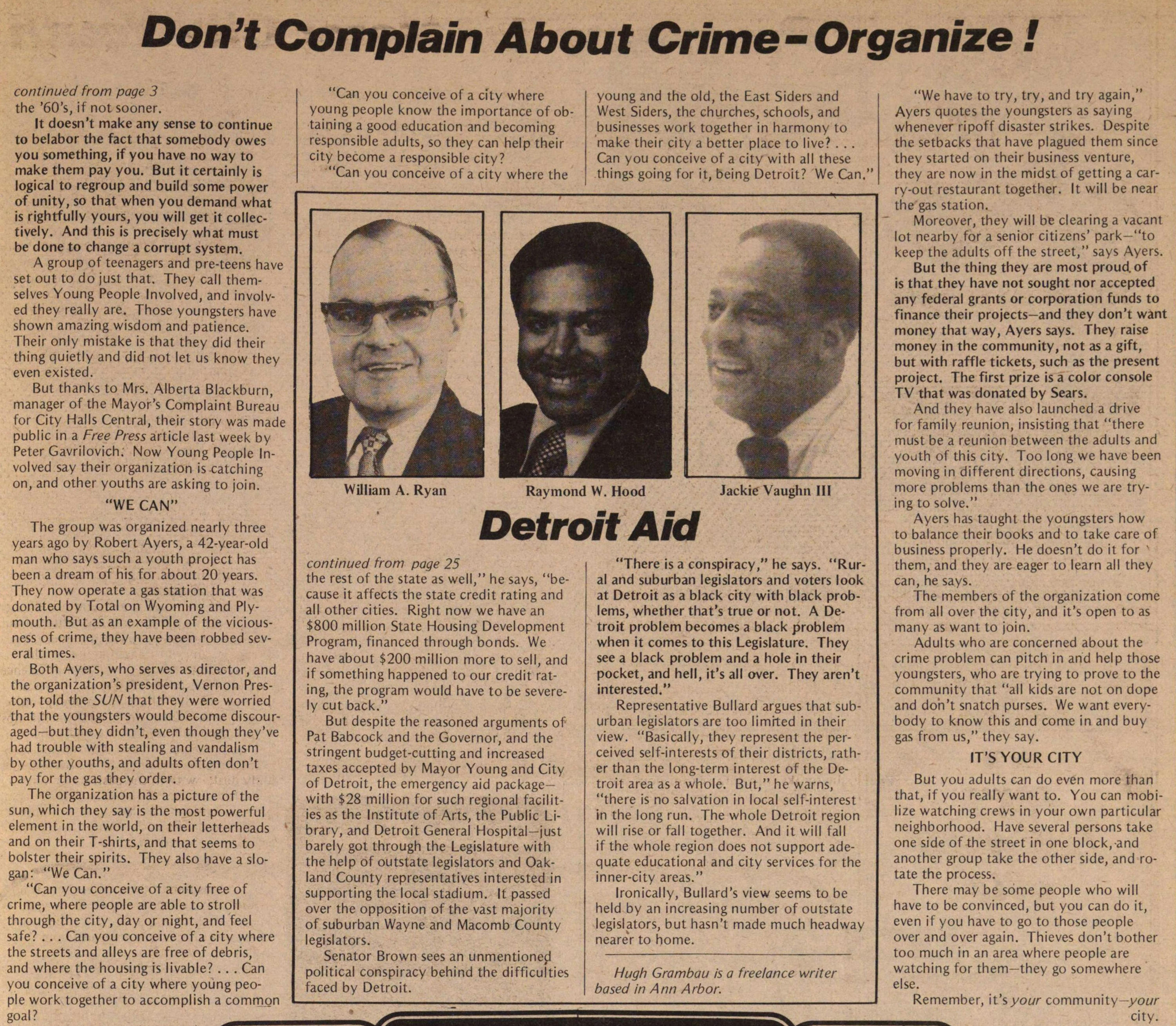 If the seed of violent crime, narcotics trafficking, was planted as a divide-and-conquer tactic to further a campaign of genocide, we must admit that t has met with a good measure of success. But it could not have worked so well had it not been for the apathy of the people. Despite numerous warnings since January of 1970, when heroin was brought into this community in plentiful supply, black on black crimes have spread like a cancer, while many respectable citizens set out to convince themselves and everybody else that it wasn't as bad as we said it was.

Newspapers, radio and television are carrying stories about rising crime-- all kinds of crime. You name it, we've got it. And one of the most tragic aspects of this disastrous situation s that a huge percentage of such crimes as assaults (on both the young and elderly), burglaries, rapes, and murders are committed by youths from 10 or 11 years old to 18.

And many of the young criminals are members of vicious youth gangs that have become amazingly professional in their criminal careers.

It is a sad commentary on the citizens of this city, state, and country that so many people sat idly by while the menacing dragon of narcotic trafficking, with its drug related crimes, has grown to such unbelievable proportions.

As a result, the United States, in city after city, is reported to have the worst narcotics problem in the world, and the poppy seed isn't grown here.

Parents have neglected their responsibilities to their own children, and the kind of callousness many of them have demonstrated is astonishing. Therefore, kids grow up like weeds with no guidance, no discipline, and no knowledge of what it means to be respectful-not only towards older people in the community, but towards their parents as well.

"THE SYSTEM MADE ME DO IT"

Many leaders-- religious, political, and otherwise- have hedged on the problem by offering all types of excuses to explain why so many young people commit crimes, very serious crimes. But they have not really tackled the criminal element. And we still hear some of them feed youths the copout excuse: I understand why you commit those crimes. It's because the system made you do it."

For a minister of a church to take such a position is blasphemous, to say the least. And such a religious leader, who has a captive audience each and every Sunday, must be weighed in the balance and found wanting. The preacher has a lot of power; he has under the sound of his voice more people than any other leader is able to gather.

Most of us know about the injustices of a society that cares more about keeping the rich richer and the poor poorer than anything else. We know that poverty, under education, joblessness and inadequate housing are all ingredients that can breed crime, particularly among the weak.

But it is purely asinine to depend on those who create such conditions and expect them to suddenly have a change of heart and deliver the black and the poor from such evils. We all should have learned that lesson during    the '60's, if not sooner.

It doesn't make any sense to continue to belabor the fact that somebody owes you something, if you have no way to make them pay you. But it certainly is logical to regroup and build some power of unity, so that when you demand what is rightfully yours, you will get it collectively. And this is precisely what must be done to change a corrupt system.

A group of teenagers and pre-teens have set out to do just that. They call themselves Young People Involved, and involved they really are. Those youngsters have shown amazing wisdom and patience. Their only mistake is that they did their thing quietly and did not let us know they even existed.

But thanks to Mrs. Alberta Blackburn, manager of the Mayor's Complaint Bureau for City Halls Central, their story was made public in a Free Press article last week by Peter Gavrilovich. Now Young People Involved say their organization is catching on, and other youths are asking to join.

The group was organized nearly three years ago by Robert Ayers, a 42-year-old man who says such a youth project has been a dream of his for about 20 years. They now operate a gas station that was donated by Total on Wyoming and Plymouth. But as an example of the viciousness of crime, they have been robbed several times.

Both Ayers, who serves as director, and the organization's president, Vernon Preston, told the SUN that they were worried that the youngsters would become discouraged-- but they didn't, even though they've had trouble with stealing and vandalism by other youths, and adults often don't pay for the gas they order.

The organization has a picture of the sun, which they say is the most powerful element in the world, on their letterheads and on their T-shirts, and that seems to bolster their spirits. They also have a slogan: "We Can."

"Can you conceive of a city where young people know the importance of obtaining a good education and becoming responsible adults, so they can help their city become a responsible city?

"Can you conceive of a city where the young and the old, the East Siders and West Siders, the churches, schools, and businesses work together in harmony to make their city a better place to live? . . .

Can you conceive of a city with all these things going for it, being Detroit? We Can."

"We have to try, try, and try again," Ayers quotes the youngsters as saying whenever ripoff disaster strikes. Despite the setbacks that have plagued them since they started on their business venture, they are now in the midst of getting a carry-out restaurant together. It will be near the gas station.

Moreover, they will be clearing a vacant lot nearby for a senior citizens' park-- "to keep the adults off the street," says Ayers.

But the thing they are most proud of is that they have not sought nor accepted any federal grants or corporation funds to finance their projects--and they don't want money that way, Ayers says. They raise money in the community, not as a gift, but with raffle tickets, such as the present project. The first prize is a color console TV that was donated by Sears.

And they have also launched a drive for family reunion, insisting that "there must be a reunion between the adults and youth of this city. Too long we have been moving in different directions, causing more problems than the ones we are trying to solve."

Ayers has taught the youngsters how to balance their books and to take care of business properly. He doesn't do it for  them, and they are eager to learn all they can, he says.

The members of the organization come from all over the city, and it's open to as many as want to join.

Adults who are concerned about the crime problem can pitch in and help those youngsters, who are trying to prove to the community that "all kids are not on dope and don't snatch purses. We want everybody to know this and come in and buy gas from us," they say.

But you adults can do even more than that, if you really want to. You can mobilize watching crews in your own particular neighborhood. Have several persons take one side of the street in one block, and another group take the other side, and rotate the process.

There may be some people who will have to be convinced, but you can do it, even if you have to go to those people over and over again. Thieves don't bother too much in an area where people are watching for them-- they go somewhere else.

Remember, it's your community your __ city.