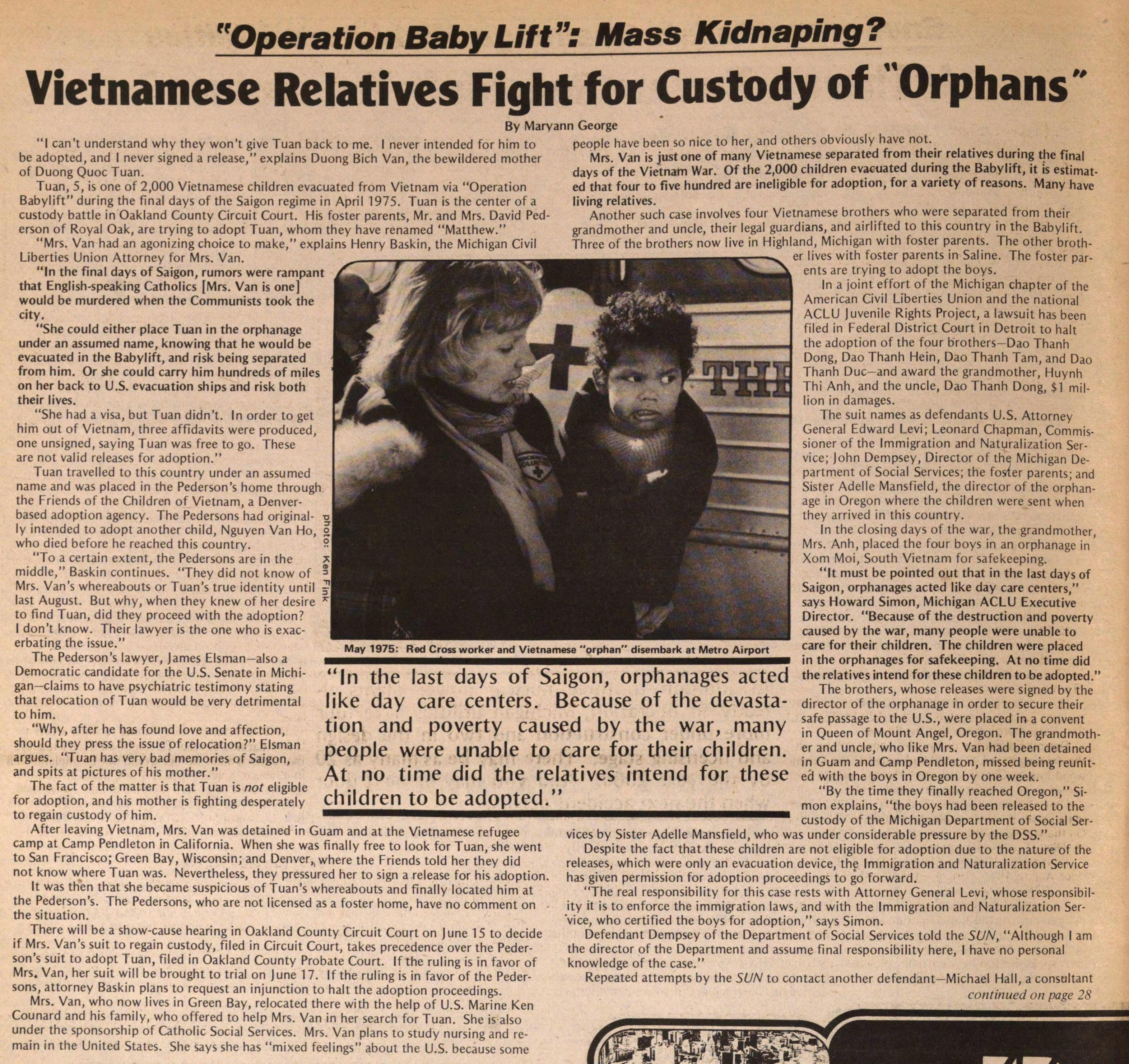 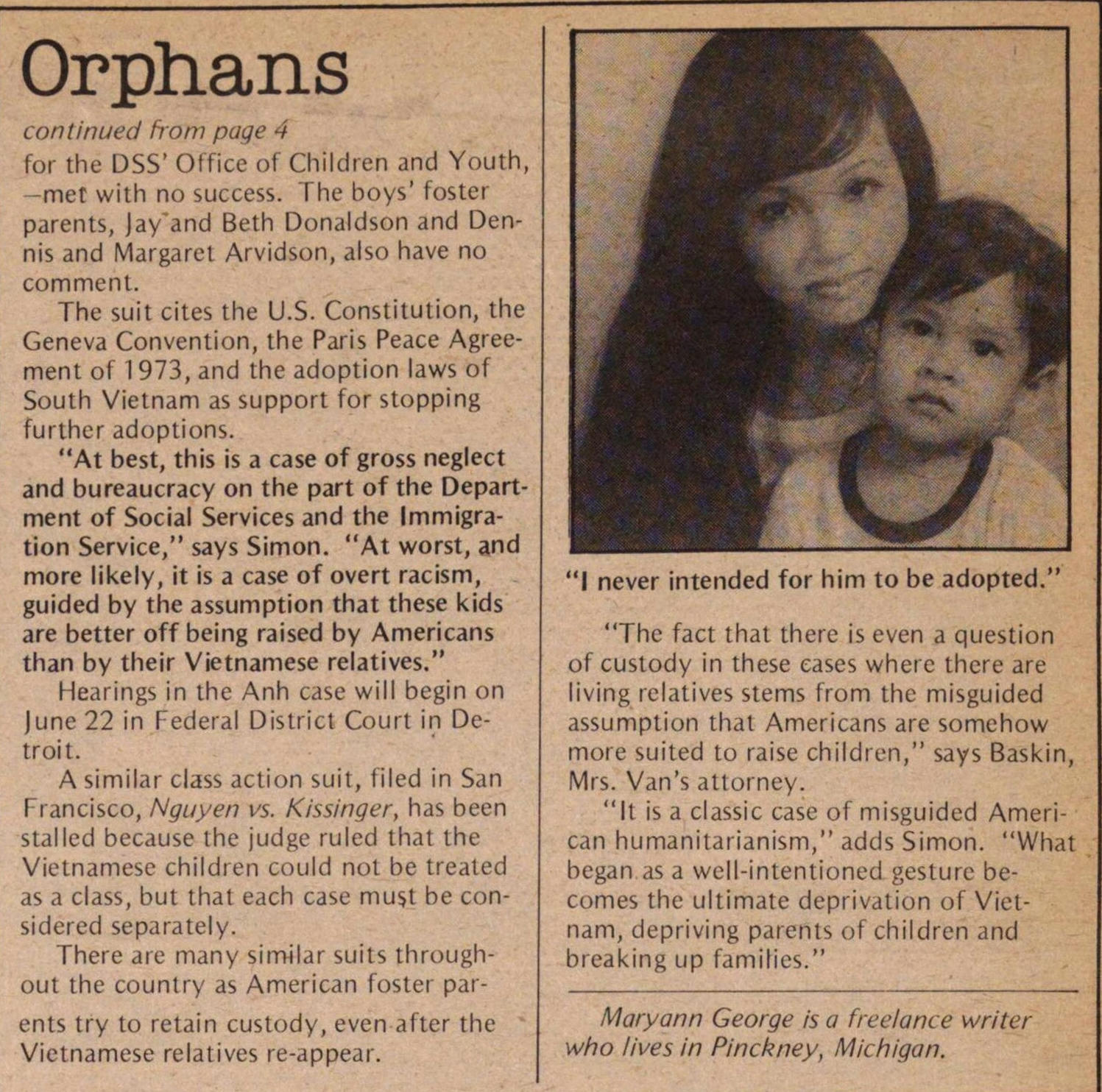 "I can't understand why they won't give Tuan back to me. I never intended for him to be adopted, and I never signed a release," explains Duong Bien Van, the bewildered mother of Duong Quoc Tuan.

Tuan, 5, is one of 2,000 Vietnamese children evacuated from Vietnam via "Operation Babylift" during the final days of the Saigon regime in April 1975. Tuan is the center of a custody battle in Oakland County Circuit Court. His foster parents, Mr. and Mrs. David Pederson of Royal Oak, are trying to adopt Tuan, whom they have renamed "Matthew."

"In the final days of Saigon, rumors were rampant that English-speaking Catholics [Mrs. Van is one] would be murdered when the Communists took the city.

"She could either place Tuan in the orphanage under an assumed name, knowing that he would be evacuated in the Babylift, and risk being separated from him. Or she could carry him hundreds of miles on her back to U.S. evacuation ships and risk both their lives.

"She had a visa, but Tuan didn't. In order to get him out of Vietnam, three affidavits were produced, one unsigned, saying Tuan was free to go. These are not valid releases for adoption."

Tuan travelled to this country under an assumed name and was placed in the Pederson's home through the Friends of the Children of Vietnam, a Denver based adoption agency. The Pedersons had originally intended to adopt another child, Nguyen Van Ho, who died before he reached this country.

"To a certain extent, the Pedersons are in the middle," Baskin continues. "They did not know of Mrs. Van's whereabouts or Tuan's true identity until last August. But why, when they knew of her desire to find Tuan, did they proceed with the adoption? I don't know. Their lawyer is the one who is exacerbating the issue."

The Pederson's lawyer, James Elsman also a Democratic candidate for the U.S. Senate in Michigan--- claims to have psychiatric testimony stating that relocation of Tuan would be very detrimental to him.

"Why, after he has found love and affection, should they press the issue of relocation?" Elsman argues. "Tuan has very bad memories of Saigon, and spits at pictures of his mother."

The fact of the matter is that Tuan is not eligible for adoption, and his mother is fighting desperately to regain custody of him.

After leaving Vietnam, Mrs. Van was detained n Guam and at the Vietnamese refugee camp at Camp Pendleton in California. When she was finally free to look for Tuan, she went to San Francisco; Green Bay, Wisconsin; and Denver,, where the Friends told her they did not know where Tuan was. Nevertheless, they pressured her to sign a release for his adoption

It was then that she became suspicious of Tuan's whereabouts and finally located him at the Pederson's. The Pedersons, who are not licensed as a foster home, have no comment on the situation.

There will be a show-cause hearing in Oakland County Circuit Court on June 15 to decide if Mrs. Van's suit to regain custody, filed in Circuit Court, takes precedence over the Pederson's suit to adopt Tuan, filed in Oakland County Probate Court. If the ruling is in favor of Mrs. Van, her suit will be brought to trial on June 17. If the ruling is in favor of the Pedersons, attorney Baskin plans to request an injunction to halt the adoption proceedings.

Mrs. Van, who now lives in Green Bay, relocated there with the help of U.S. Marine Ken Counard and his family, who offered to help Mrs. Van in her search for Tuan. She is also under the sponsorship of Catholic Social Services. Mrs. Van plans to study nursing and remain in the United States. She says she has "mixed feelings" about the U.S. because some people have been so nice to her, and others obviously have not.

Mrs. Van is just one of many Vietnamese separated from their relatives during the final days of the Vietnam War. Of the 2,000 children evacuated during the Babylift, it is estimated that four to five hundred are ineligible for adoption, for a variety of reasons. Many have living relatives.

Another such case involves four Vietnamese brothers who were separated from their grandmother and uncle, their legal guardians, and airlifted to this country in the Babylift. Three of the brothers now live n Highland, Michigan with foster parents. The other brother lives in Saline. The foster parents are trying to adopt the boys.

In a joint effort of the Michigan chapter of the American Civil Liberties Union and the national ACLU Juvenile Rights Project, a lawsuit has been filed in Federal District Court in Detroit to halt the adoption of the four brothers--- Dao Thanh Dong, Dao Thanh Hein, Dao Thanh Tam, and Dao Thanh Duc--- and award the grandmother, Huynh Thi Anh, and the uncle, Dao Thanh Dong, $1 million in damages.

The suit names as defendants U.S. Attorney General Edward Levi; Leonard Chapman, Commissioner of the Immigration and Naturalization Service; John Dempsey, Director of the Michigan Department of Social Services; the foster parents; and Sister Adelle Mansfield, the director of the orphanage in Oregon where the children were sent when they arrived in this country.

In the closing days of the war, the grandmother, Mrs. Anh, placed the four boys in an orphanage in Xom Moi, South Vietnam for safekeeping.

"It must be pointed out that in the last days of Saigon, orphanages acted like day care centers," says Howard Simon, Michigan ACLU Executive Director. "Because of the destruction and poverty caused by the war, many people were unable to care for their children. The children were placed n the orphanages for safekeeping. At no time did the relatives intend for these children to be adopted."

The brothers, whose releases were signed by the director of the orphanage in order to secure their safe passage to the U.S., were placed in a convent in Queen of Mount Angel, Oregon. The grandmother and uncle, who like Mrs. Van had been detained in Guam and Camp Pendleton, missed being reunited with the boys in Oregon by one week.

"By the time they finally reached Oregon," Simon explains, "the boys had been released to the custody of the Michigan Department of Social vices by bister Adelle Mansfield, who was under considerable pressure by the DSS.

Despite the fact that these children are not eligible for adoption due to the nature of the releases, which were only an evacuation device, the Immigration and Naturalization Service has given permission for adoption proceedings to go forward.

"The real responsibility for this case rests with Attorney General Levi, whose responsibility it is to enforce the immigration laws, and with the Immigration and Naturalization Service, who certified the boys for adoption," says Simon.

Repeated attempts by the SUN to contact another defendant----Michael Hall, a consultant for the DSS' Office of Children and Youth, ---met with no success. The boys' foster parents, jay"and Beth Donaldson and Dennis and Margare! Arvidson, also have no comment.

The suit cites the U.S. Constitution, the Geneva Convention, the Paris Peace Agreement of 1 973, and the adoption laws of South Vietnam as support for stopping further adoptions.

"At best, this is a case of gross neglect and bureaucracy on the part of the Department of Social Services and the Immigration Service," says Simon. "At worst, and more likely, it is a case of overt racism, guided by the assumption that these kids are better off being raised by Americans than by their Vietnamese relatives."

Hearings in the Anh case will begin on June 22 in Federal District Court in Detroit.

A similar class action suit, filed in San Francisco, Nguyen vs. Kissinger, has been stalled because the judge ruled that the Vietnamese children could not be treated as a class, but that each case must be considered separately.

There are many similar suits throughout the country as American foster parents try to retain custody, even after the Vietnamese relatives re-appear.

"The fact that there is even a question of custody in these eases where there are living relatives stems from the misguided assumption that Americans are somehow more suited to raise children," says Baskin, Mrs. Van's attorney.

"Il is a classic case of misguided American humanitarianism," adds Simon. "What began as a well-intentioned gesture becomes the ultimate deprivation of Vietnam, depriving parents of children and breaking up families."