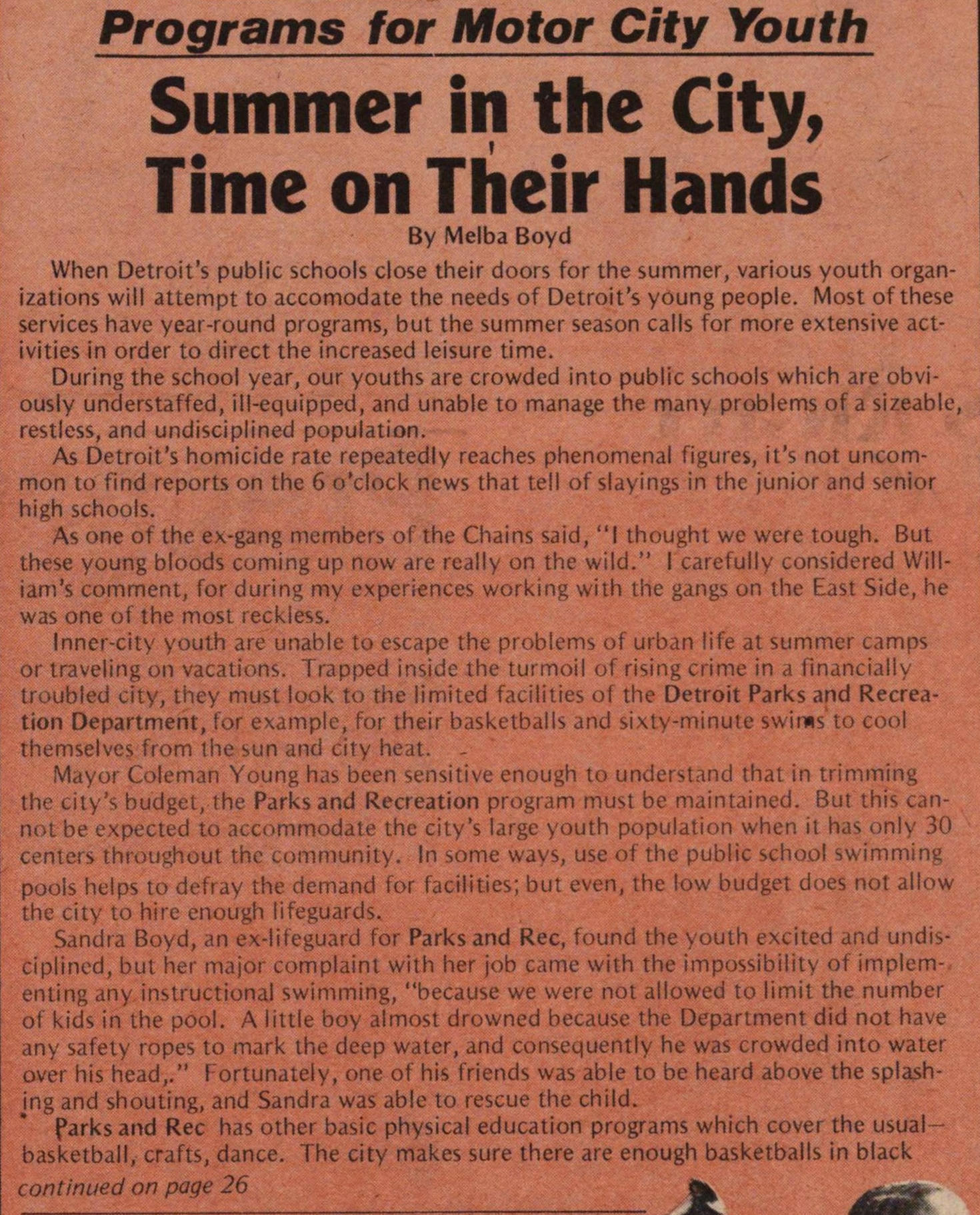 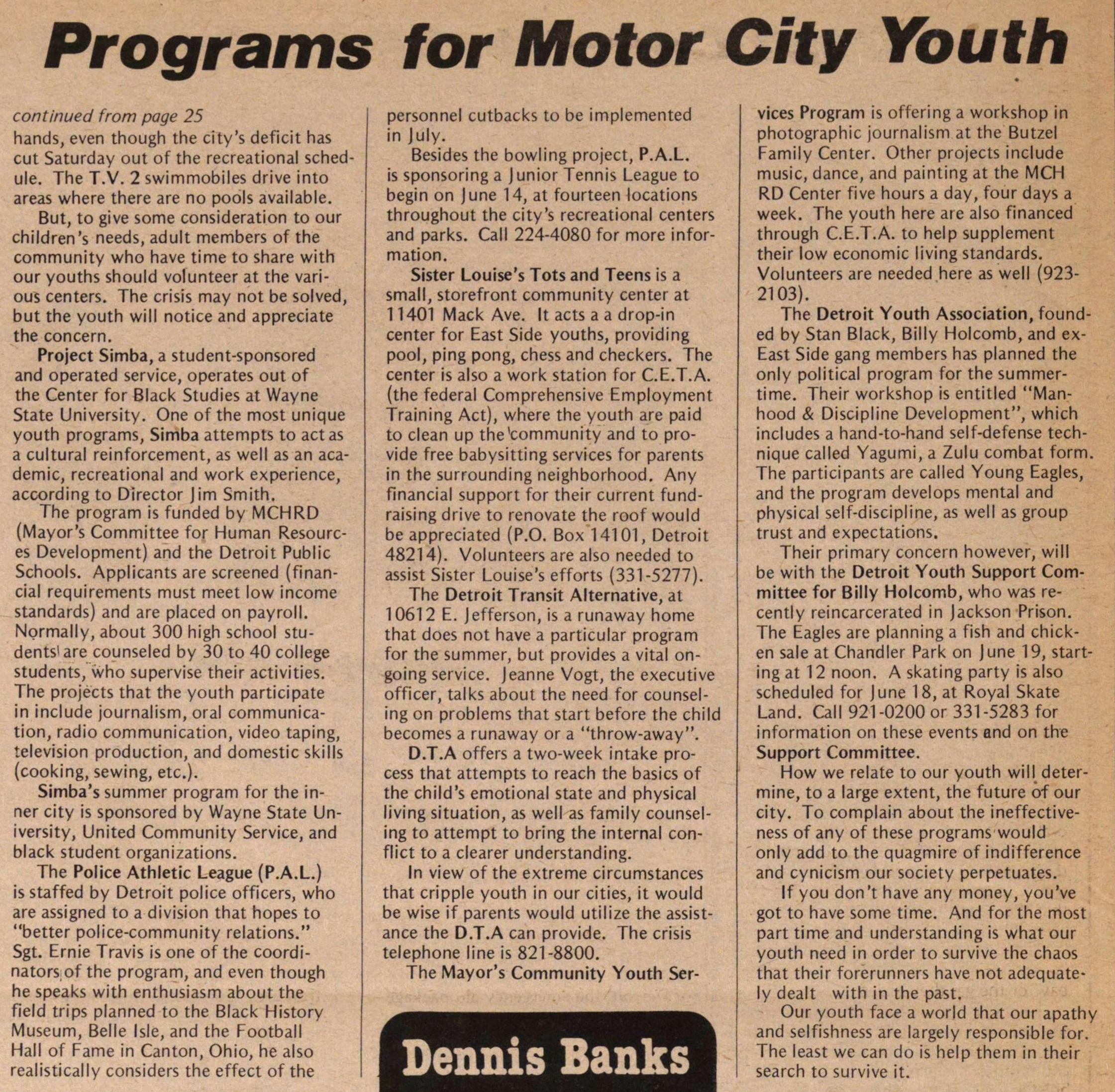 Summer in the City, Time on Their Hands

When Detroit's public schools close their doors for the summer, various youth organizations will attempt to accommodate the needs of Detroit's young people. Most of these services have year-round programs, but the summer season calls for more extensive activities in order to direct the increased leisure time.

During the school year, our youths are crowded into public schools which are obviously understaffed, ill-equipped, and able to manage the many problems of a sizeable, restless, and undisciplined population.

As Detroit's homicide rate repeatedly reaches phenomenal figures, it's not uncommon to find reports on the 6 o'clock news that tell of slayings in the junior and senior high schools.

As one of the ex-gang members of the Chains said, "I thought we were tough. But these young bloods coming up now are really on the wild." I carefully considered William's comment, for during my experiences working with the gangs on the East Side, he was one of the most reckless.

Inner-city youth are unable to escape the problems of urban life at summer camps or traveling on vacations. Trapped inside the turmoil of rising crime in a financially troubled city, they must look to the limited facilities of the Detroit Parks and Recreation Department, for example, for their basketballs and sixty-minute swims to cool themselves from the sun and city heat.

Mayor Coleman Young has been sensitive enough to understand that in trimming the city's budget, the Parks and Recreation program must be maintained. But this cannot be expected to accommodate the city's large youth population when it has only 30 centers throughout the community. In some ways, use of the public school swimming pools helps to defray the demand for facilities; but even, the low budget does not allow the city to hire enough lifeguards.

Sandra Boyd, an ex-lifeguard for Parks and Rec, found the youth excited and undisciplined, but her major complaint with her job came with the impossibility of implementing any instructional swimming, "because we were not allowed to limit the number of kids in the pool. A little boy almost drowned because the Department did not have any safety ropes to mark the deep water, and consequently he was crowded into water over his head." Fortunately, one of his friends was able to be heard above the splashing and shouting, and Sandra was able to rescue the child.

Parks and Rec has other basic physical education programs which each cover the usual- basketball, crafts, dance. The city makes sure there are enough basketballs in black hands, even though the city's deficit has cut Saturday out of the recreational schedule. The T.V. 2 swimmobiles drive into areas where there are no pools available.

But, to give some consideration to our children's needs, adult members of the community who have time to share with our youths should volunteer at the various centers. The crisis may not be solved, but the youth will notice and appreciate the concern.

Project Simba, a student-sponsored and operated service, operates out of the Center for Black Studies at Wayne State University. One of the most unique youth programs, Simba attempts to act as a cultural reinforcement, as well as an academic, recreational and work experience, according to Director Jim Smith.

The program is funded by MCHRD (Mayor'sCommittee for Human Resources Development) and the Detroit Public Schools. Applicants are screened (financial requirements must meet low income standards) and are placed on payroll. Normally, about 300 high school students are counseled by 30 to 40 college students, who supervise their activities. The projects that the youth participate in include journalism, oral communication, radio communication, video taping, television production, and domestic skills (cooking, sewing, etc.).

The Police Athletic League (P.AL.) is staffed by Detroit police officers, who are assigned to a division that hopes to "better police-community relations." Sgt. Ernie Travis is one of the coordinators of the program, and even though he speaks with enthusiasm about the field trips planned to the Black History Museum, Belle Isle, and the Football Hall of Fame in Canton, Ohio, he also realistically considers the effect of the personnel cutbacks to be implemented in July.

Besides the bowling project, P.A.L is sponsoring a Junior Tennis League to begin on June 14, at fourteen locations throughout the city's recreational centers and parks. Call 224-4080 for more information.

Sister Louise's Tots and Teens is a small, storefront community center at 11401 Mack Ave. It acts as a drop-in center for East Side youths, providing pool, ping pong, chees and checkers. The center is also a work station for C.E.T.A. (the federal Comprehensive Employment Training Act), where the youth are paid to clean up the community and to provide free babysitting services for parents in the surrounding neighborhood. Any financial support for their current fundraising drive to renovate the roof would be appreciated. (P.O. Box 11401, Detroit 48214). Volunteers are also needed to assist Sister Louise's efforts (331-5277).

The Detroit Transit Alternative, as 10612 E. Jefferson, is a runaway home that does not have a particular program for the summer, but provides a vital on-going service. Jeanne Vogt, the executive officer, talks about the need for counseling on problems that start before the child becomes a runaway or a "throw-away."

D.T.A offers a two-week intake process that attempts to reach the basics of the child's emotional state and physical living situation, as well as family counseling to attempt to bring the internal conflict to a clearer understanding.

In view of the extreme circumstances that cripple youth in our cities, it would be wise if parents would utilize the assistance the D.T.A can provide. The crisis telephone line is 821-8800.

The Mayor's Community Youth Services Program is offering a workshop in photographic journalism at the Butzel Family Center. Other projects include music, dance, and painting at the MCH RD Center five hours a day, four days a week. The youth here are also financed through C.E.T.A. to help supplement their low economic living standards. Volunteers are needed here as well (923-2103).

The Detroit Youth Association, founded by STand Black, Billy Holcomb, and ex-East Side gang members has planned the only political program for the summer-time. Their workshop is entitled "Manhood & Discipline Development," which includes a hand-to-hand self-defense technique called Yagumi, a Zulu combat form. The participants are called Young Eagles, and the pgoram develops mental and physical self-discipline, as well as group trust and expectations.

Their primary concern however, will be with the Detroit Youth Support Committee for Billy Holcomb, who was recently reincarcerated in Jackson Prison. The Eagles are planning a fish and chicken sale at Chandler Park on June 19, starting at 12 noon. A skating party is also scheduled for June 18, at Royal Skate Land. Call 921-0200 or 331-5238 for information on these events and on the Support Committee.

How we relate to our youth will determine, to a large extent, the future of our city. To complain about the ineffectiveness of any of these programs would only add to the quagmire of indifference and cynicism our society perpetuates.

If you don't have any money, you've got to have some time. And for the most part time and understanding is what our youth need in order to survive the chaos that their forerunners have not adequately dealt with in the past.

Our youth face a world that our apathy and selfishness are largely responsible for. The least we can do is help them in their search to survive it.