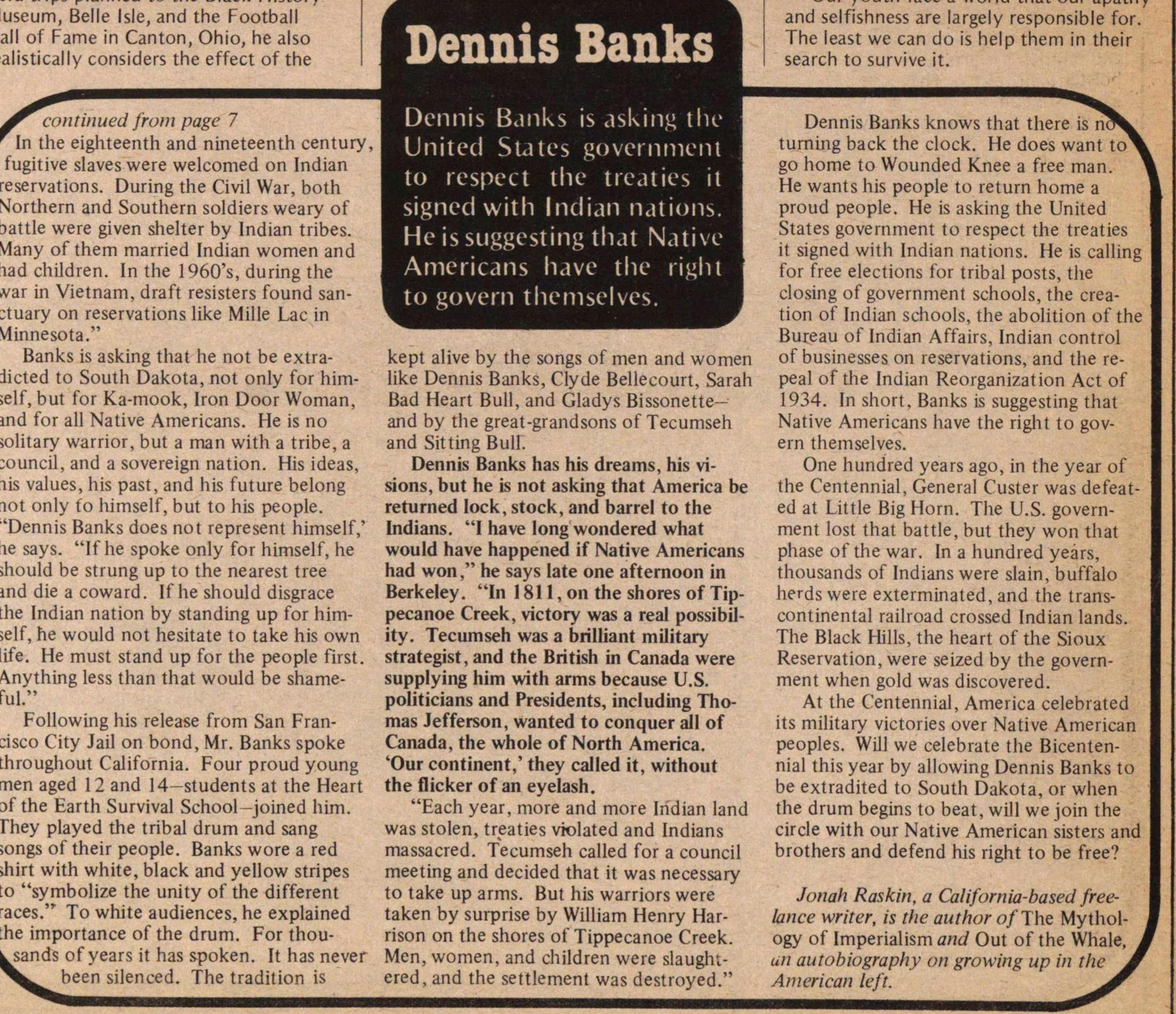 DennisBanks is asking the United States government to respect the treaties it signed with Indian nations. He is suggesting that Native Americans have the right to govern themselves.

In the eighteenth and nineteenth century, fugitive slaves were welcomed on Indian reservations. During the Civil War, both Northern and Southern soldiers weary of battle were given shelter by Indian tribes. Many of them married Indian women and had children. In the 1960's, during the war in Vietnam, draft registers found sanctuary on reservations like Mille Lac in Minnesota."

Banks is asking that he not be extradited to South Dakota, not only for himself, but for Ka-mook, Iron Door Woman, and for all Native Americans. He is no solitary warrior, but a man with a tribe, a council, and a sovereign nation. His ideas, his values, his past, and his future belong not only to himself, but to his people. "Dennis Banks does not represent himself," he says. "If he spoke only for himself, he should be strung up to the nearest tree and die a coward. If he should disgrace the Indian nation by standing up for himself, he would not hesitate to take his own life. He must stand up for the people first. Anything less than that would be shameful."

Following his release from San Francisco City Jail on bond, Mr. Banks spoke throughout California. Four proud young men aged 12 and 14 - students at the Heart of the Earth Survival School - joined him. They played the tribal drum and sang songs of their people. Banks wore a red shirt with white, black and yellow stripes to "symbolize the unity of the different races." To white audiences, he explained the importance of the drum. For thousands of years is has spoken. It has never been silenced. The tradition is kept alive by the songs of men and women like Dennis Banks, Clyde Bellecourt, Sarah Bad Heart Bull, and Gladys Bissonette - and by the great-grandsons of Tecumseh and Sitting Bull.

Dennis Banks has his dreams, his visions, but he is not asking that America be returned lock, stock, and barrel to the Indians. "I have long wondered what would have happened if Native Americans had won," he says late one afternoon in Berkeley. "In 1811, on the shores of Tippecanoe Creek, victory was a real possibility. Tecumseh was a brilliant military strategist, and the British in Canada were supplying him with arms because U.S. politicians and Presidents, including Thomas Jefferson, wanted to conquer all of Canada, the whole of North America. 'Our continent,' they called it, with the flicker of an eyelash.

"Each year, more and more Indian land was stolen, treaties violated and Indians massacred. Tecumseh called for a council meeting and decided that it was necessary to take up arms. But his warriors were taken by surprise by William Henry Harrison on the shores of Tippecanoe Creek. Men, women, and children were slaughtered, and the settlement was destroyed."

Dennis Banks knows that there is no turning back the clock. He does want to go home to Wounded Knee a free man. He wants his people to return home a proud people. He is asking the United States government to respect the treaties it signed with Indian nations. He is calling for free elections for tribal posts, the closing of government schools, the creation of Indian schools, the abolition of the Bureau of Indian Affairs, Indian control of businesses on reservations, and the repeal of the Indian Reorganization Act of 1934. In short, Banks is suggesting that Native Americans have the right to govern themselves.

One hundred years ago, in the year of the Centennial, General Custer was defeated at Little Big Horn. The U.S. government lost that battle, but they won that phase of the war. In a hundred years, thousands of Indians were slain, buffalo herds were exterminated, and the transcontinental railroad crossed Indian lands. The Black Hills, the heart of the Sioux Reservation, were seized by the government when gold was discovered.

At the Centennial, America celebrated its military victories over Native American peoples. Will we celebrate the Bicentennial this year by allowing Dennis Banks to be extradited to South Dakota, or when the drum begins to beat, will we join the circle with our Native American sisters and brothers and defend his right to be free?

Jonah Raskin, a California-based freelance writer, is the author of The Mythology of Imperialism and Out of the Whale, an autobiography on growing up in the American left.