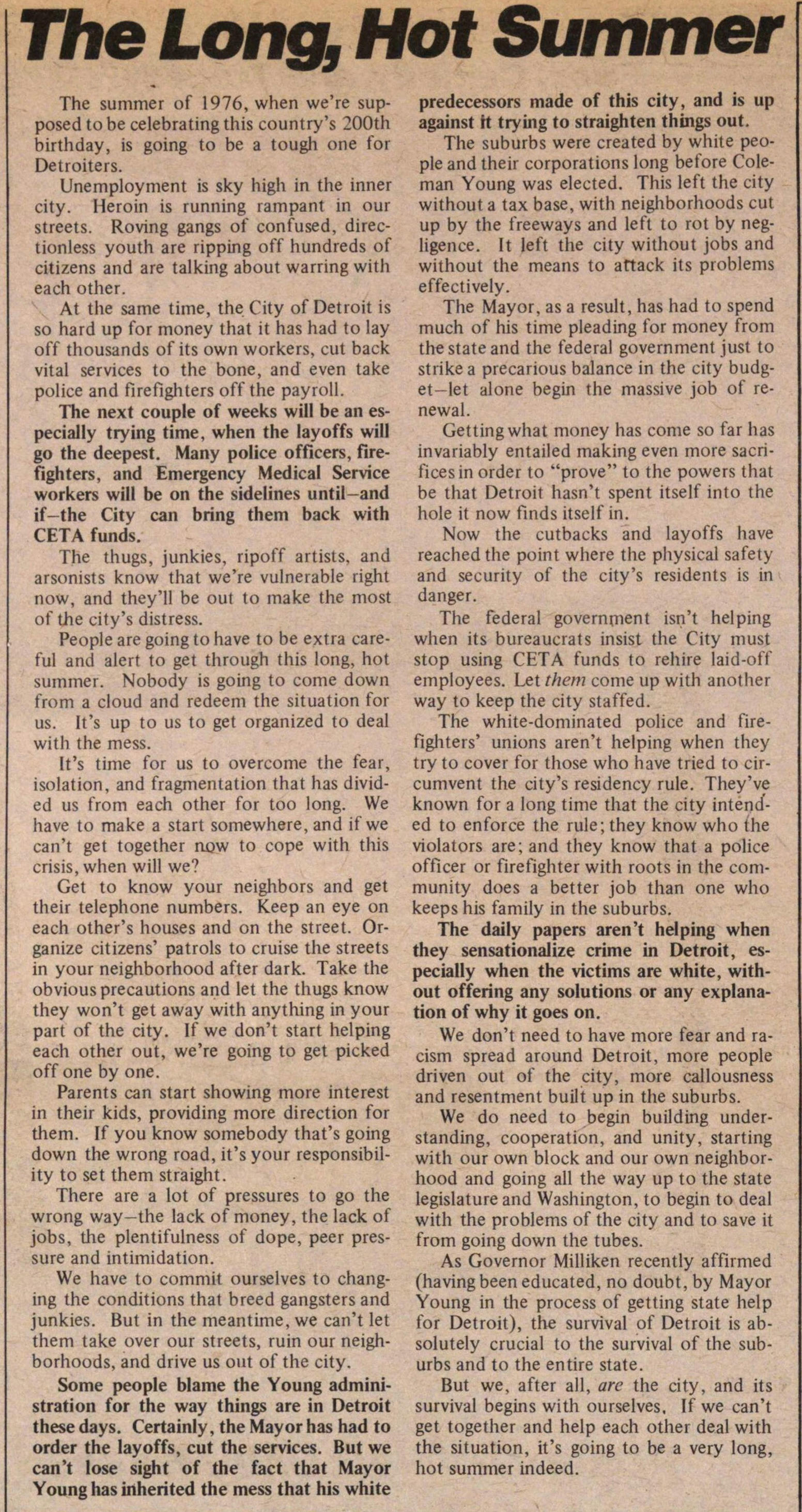 The summer of 1976, when we're supposed to be celebrating this country's 200th birthday, is going to be a tough one for Detroiters.

Unemployment is sky high in the inner city. Heroin is running rampant in our streets. Roving gangs of confused, directionless youth are ripping off hundreds of citizens and are talking about warring with each other.

At the same time, the City of Detroit is so hard up for money that it has had to lay off thousands of its own workers, cut back vital services to the bone, and even take police and firefighters off the payroll.

The next couple of weeks will be an especially trying time, when the layoffs will go the deepest. Many police officers, firefighters, and Emergency Medical Service workers will be on the sidelines until-and if-the City can bring them back with CETA funds.

The thugs, junkies, ripoff artists, and arsonists know that we're vulnerable right now, and they'll be out to make the most of the city's distress.

People are going to have to be extra careful and alert to get through this long, hot summer. Nobody is going to come down from a cloud and redeem the situation for us. It's up to us to get organized to deal with the mess.

It's time for us to overcome the fear, isolation, and fragmentation that has divided us from each other for too long. We have to make a start somewhere, and if we can't get together now to cope with this crisis, when will we?

Get to know your neighbors and get their telephone numbers. Keep an eye on each other's houses and on the street. Organize citizens' patrols to cruise the streets in your neighborhood after dark. Take the obvious precautions and let the thugs know they won't get away with anything in your part of the city. If we don't start helping each other out, we're going to get picked off one by one.

Parents can start showing more interest in their kids, providing more direction for them. If you know somebody that's going down the wrong road, it's your responsibility to set them straight.

There are a lot of pressures to go the wrong way - the lack of money, the lack of jobs, the plentifulness of dope, peer pressure and intimidation.

We have to commit ourselves to changing the conditions that breed gangsters and junkies. But in the meantime, we can't let them take over our streets, ruin our neighborhoods, and drive us out of the city.

Some people blame the Young administration for the way things are in Detroit these days. Certainly, the Mayor has had to order the layoffs, cut the services. But we can't lose sight of the fact that Mayor Young has inherited the mess that his white predecessors made of this city, and is up against it trying to straighten things out.

The suburbs were created by white people and their corporations long before Coleman Young was elected. This left the city without a tax base, with neighborhoods cut up by the freeways and left to rot by negligence. It left the city without jobs and without the means to attack its problems effectively.

The Mayor, as a result, has had to spend much of his time pleading for money from the state and the federal government just to strike a precarious balance in the city budget - let alone begin the massive job of renewal.

Getting what money has come so far has invariably entailed making even more sacrifices in order to "prove" to the powers that be that Detroit hasn't spent itself into the hole it now finds itself in.

Now the cutbacks and layoffs have reached the point where the physical safety and security of the city's residents is in danger.

The federal government isn't helping when its bureaucrats insist the City must stop using CETA funds to rehire laid-off employees. Let them come up with another way to keep the city staffed.

The white-dominated police and firefighters' unions aren't helping when they try to cover for those who have tried to circumvent the city's residency rule. They've known for a long time that the city intended to enforce the rule; they know who the violators are; and they know that a police officer or firefighter with roots in the community does a better job than one who keeps his family in the suburbs.

The daily papers aren't helping when they sensationalize crime in Detroit, especially when the victims are white, without offering any solutions or any explanation of why it goes on.

We don't need to have more fear and racism spread around Detroit, more people driven out of the city, more callousness and resentment built up in the suburbs.

We do need to begin building understanding, cooperation, and unity, starting with our own block and our own neighborhood and going all the way up to the state legislature and Washington, to begin to deal with the problems of the city and to save it from going down the tubes.

As Governor Milliken recently affirmed (having been educated, no doubt, by Mayor Young in the process of getting state help for Detroit), the survival of Detroit is absolutely crucial to the survival of the suburbs and to the entire state.

But we, after all, are the city, and its survival begins with ourselves. If we can't get together and help each other deal with the situation, it's going to be a very long, hot summer indeed.