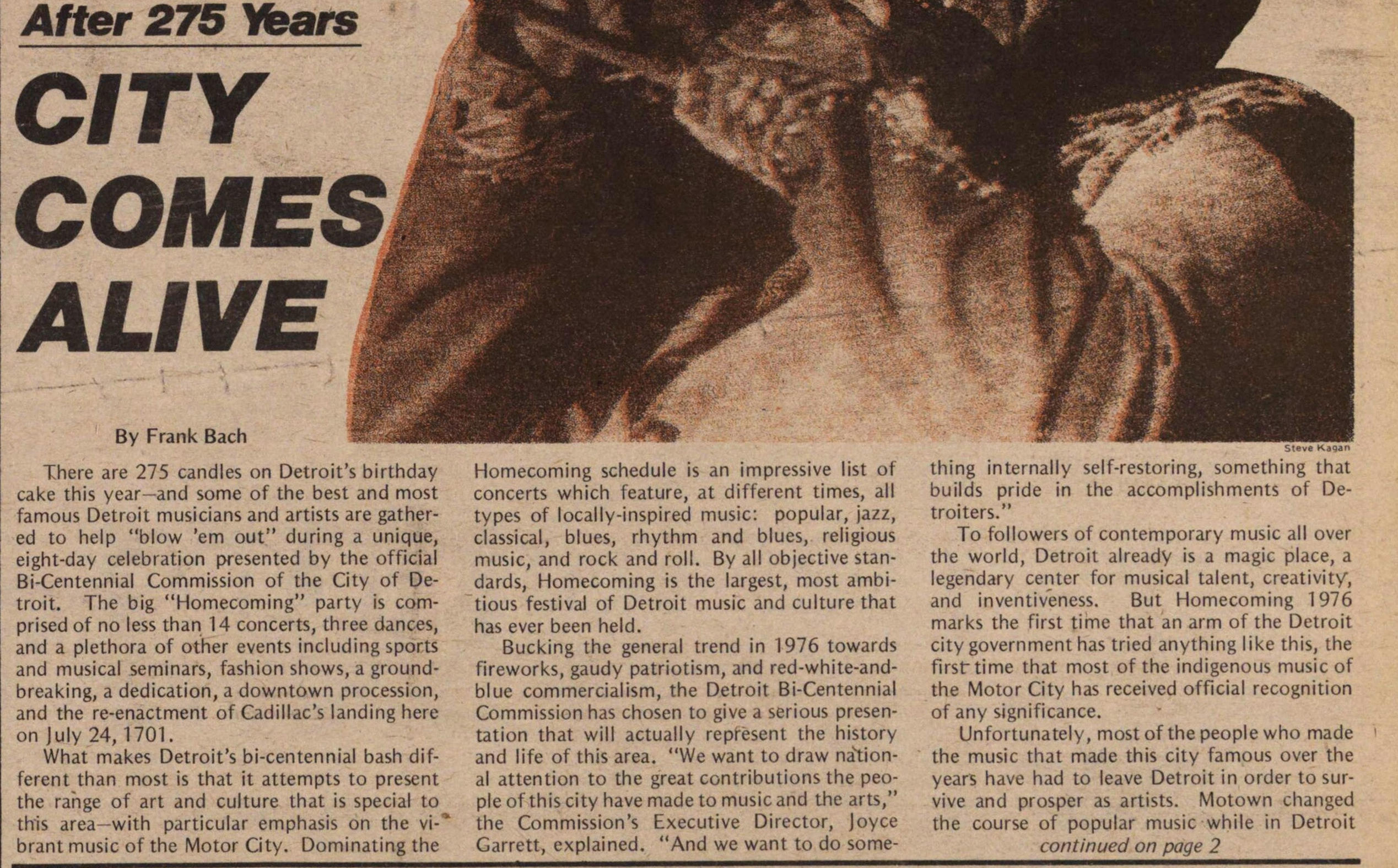 There are 275 candles on Detroit's birthday cake this year- and some of the best and most famous Detroit musicians and artists are gathered to help "blow 'em out" during a unique, eight-day celebration presented by the official Bi-Centennial Commission of the City of Detroit. The big "Homecoming" party is comprised of no less than 14 concerts, three dances, and a plethora of other events including sports and musical seminars, fashion shows, a groundbreaking, a dedication, a downtown procession, and the re-enactment of Cadillac's landing here on July 24, 1701.

What makes Detroit's bi-centennial bash different than most is that it attempts to present the range of art and culture that is special to this area- with particular emphasis on the vibrant music of the Motor City. Dominating the Homecoming schedule s an mpressive list of concerts which feature, at different times, all types of locally-inspired music: popular, jazz, classical, blues, rhythm and blues, religious music, and rock and roll. By all objective standards, Homecoming is the largest, most ambitious festival of Detroit music and culture that has ever been held.

Bucking the general trend in 1976 towards fireworks, gaudy patriotism, and red-white-and-blue commercialism, the Detroit Bi-Centennial Commission has chosen to give a serious presentation that will actually represent the history and life of this area. "We want to draw national attention to the great contributions the people of this city have made to music and the arts," the Commission's Executive Director, Joyce Garrett, explained. "And we want to do thing internally self-restoring, something that builds pride in the accomplishments of Detroiters."

To followers of contemporary music all over the world, Detroit already is a magic place, a legendary center for musical talent, creativity, and inventiveness. But Homecoming 1976 marks the first time that an arm of the Detroit city government has tried anything like this, the firsr time that most of the indigenous music of the Motor City has received official recognition of any significance.

Unfortunately, most of the people who made the music that made this city famous over the years have had to leave Detroit in order to survive and prosper as artists. Motown changed the course of popular music while in Detroit during the sixties, jazz stars have grown like weeds here for the last thirty years, many gospel and blues greats lived here at one time or another-but almost all of them had to get out to "make it."

This week many will finally get some of the respect they have long deserved when they return as part of Homecoming 1976 to salute the city where they gol their start.

This week we will hear the history of Detroit as told by the living artists who are part of that history. Their art has thrived on the prosperity of the Motor City, and it has survived despite the economic depressions which hit the place so hard, despite its historic street rebellions (Detroiter john Lee Hooker had a hit in 1967 with "The Motor City's Burnin' "), despite the poison of racism, despite the destruction of neighborhoods where people lived and made music. Many of the artists still do call Detroit home- those that don't love this place and its people so much that they had to come back to be part of this gala reunion.

Despite everything that this year's Homecoming promises, it will, no doubt, have its share of disappointments and unexpected mishaps. This is a first for the city and its BiCentennial Commission, which has had to do almost everything without adequate funds. The nitial grant from the National Endowment for the Arts for $25,000 wasn't much for an undertaking of this size, and publicity and promotion has suffered.

Despite its difficulties, however, Homecoming 1976 has already inspired talk of an annual Homecoming festival that would bring out the city's best for a full week every summer. If that is possible, we certainly have a lot to look forward to.