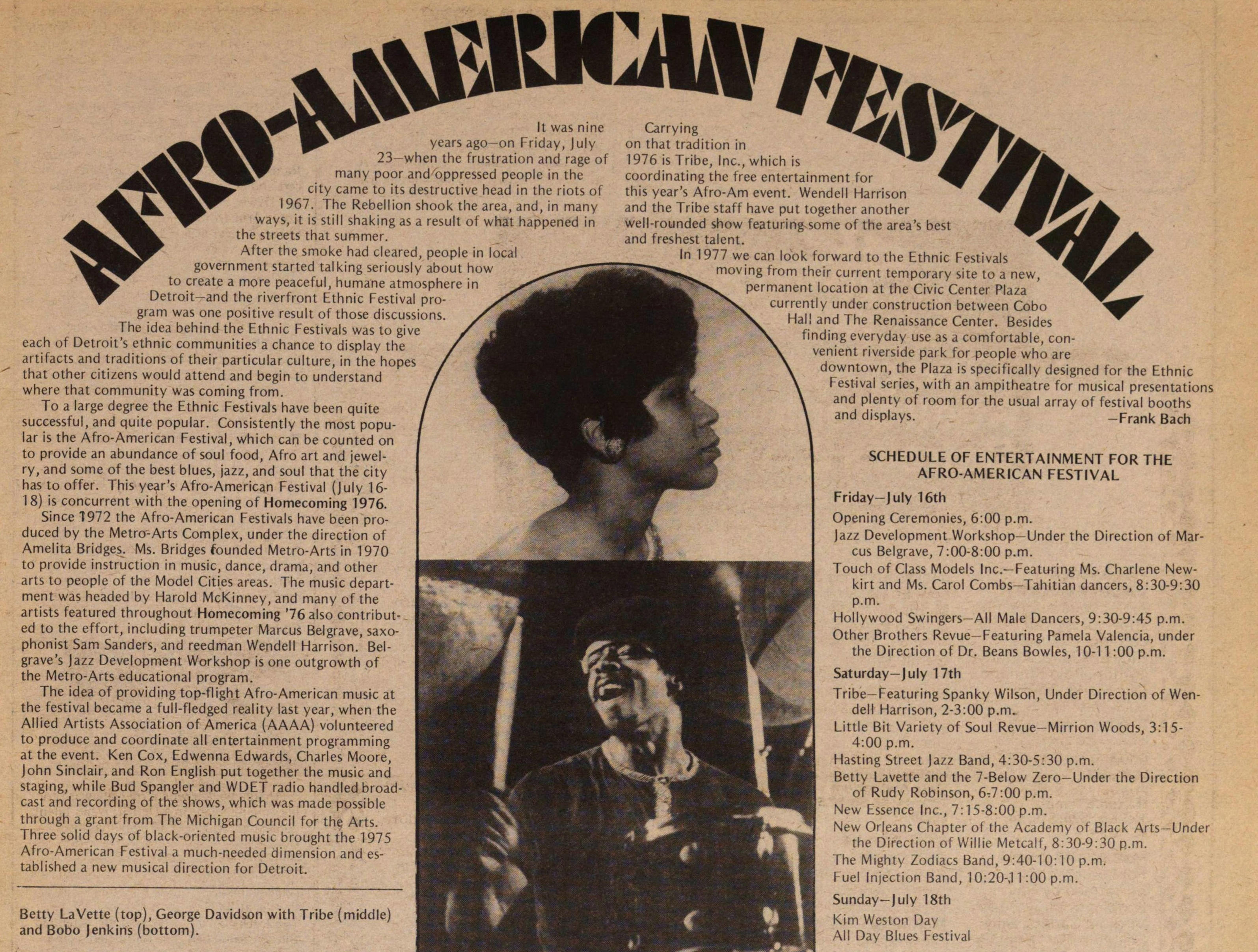 It was nine years ago-on Friday,July 23-when the frustration and rage of many poor and oppressed people in the city came to its destructive head in the riots of 1967.The Rebellion shook the area, and, in many ways, it is still shaking as a result of what happed in the streets that summer.

After the smoke had cleared, people in local  government started talking seriously about how  to create a more peaceful, humane atmosphere in  Detroit-and the riverfront Ethnic Festival program was one positive result of those discussions.

The idea behind the Ethnic Festivals was to give each of Detroit's ethnic communities a chance to display the artifacts and traditions of their particular culture, in the hopes that other citizens would attend and begin to understand where that community was coming from.

To a large degree the Ethnic Festivals have been quite successful, and quite popular. Consistently the most popular is the Afro-American Festival, which can be counted on to provide an abundance of soul food, Afro art and jewelry, and some of the best blues, jazz, and soul that the city has to offer. This year's Afro-American Festival (July 16-18) is concurrent with the opening of Homecoming 1976.

Since 1972 the Afro-American Festivals have been produced by the Metro-Arts Complex, under the direction of Amelita Bridges. Ms. Bridges founded Metro-Arts in 1970 to provide instruction in music, dance, drama, and other arts to people of the Model Cities areas. The music department was headed by Harold McKinney, and many of the artists featured throughout Homecoming '76 also contributed to the effort, including trumpeter Marcus Belgrave, saxophonist Sam Sanders, and reedman Wendell Harrison. Belgrave's Jazz Development Workshop is one outgrowth of the Metro-Arts educational program.

The idea of providing top-flight Afro-American music at the festival became a full-fledged reality last year, when the Allied Artists Association of America (AAAA) volunteered to produce and coordinate all entertainment programming at the event. Ken Cox, Edwenna Edwards, Charles Moore, John Sinclair, and Ron English put together the music and staging, white Bud Spangier and WDET radio handled broadcast and recording of the shows, which was made possible through a grant from The Michigan Council for the Arts. Three solid days of black-oriented music brought the 1975 Afro-American Festival a much-needed dimension and established a new musical direction for Detroit.

Carrying on that tradition in 1976 is Tribe, Inc., which is coordinating the free entertainment for this year's Afro-Am event. Wendell Harrison and the Tribe staff have put together another well-rounded show featuring some of the area's best and freshest talent.

In 1977 we can look forward to the Ethnic Festivals moving from this current temporary site to a new, permanent location at the Civic Center Plaza  currently under construction between Cobo Hall and The Renaissance Center. Besides  finding everyday use as a comfortable, convenient riverside park for people who are downtown, the Plaza is specifically designed for the Ethnic Festival series, with an ampitheatre for musical presentations and plenty of room for the usual array of festival booths and displays.

SCHEDULE OF ENTERTAINMENT FOR THE AFRO-AMERICAN FESTIVAL

Jazz Development Workshop- Under the Direction of Marcus Belgrave, 7:00-8:00 p.m.

Betty Lavette and the 7-Below Zero-Under the Direction of Rudy Robinson, 6-7:00 p.m.

New Orleans Chapter of the Academy of Black Arts- Under the Direction of Willie Metcalf, 8:30-9:30 p.m.