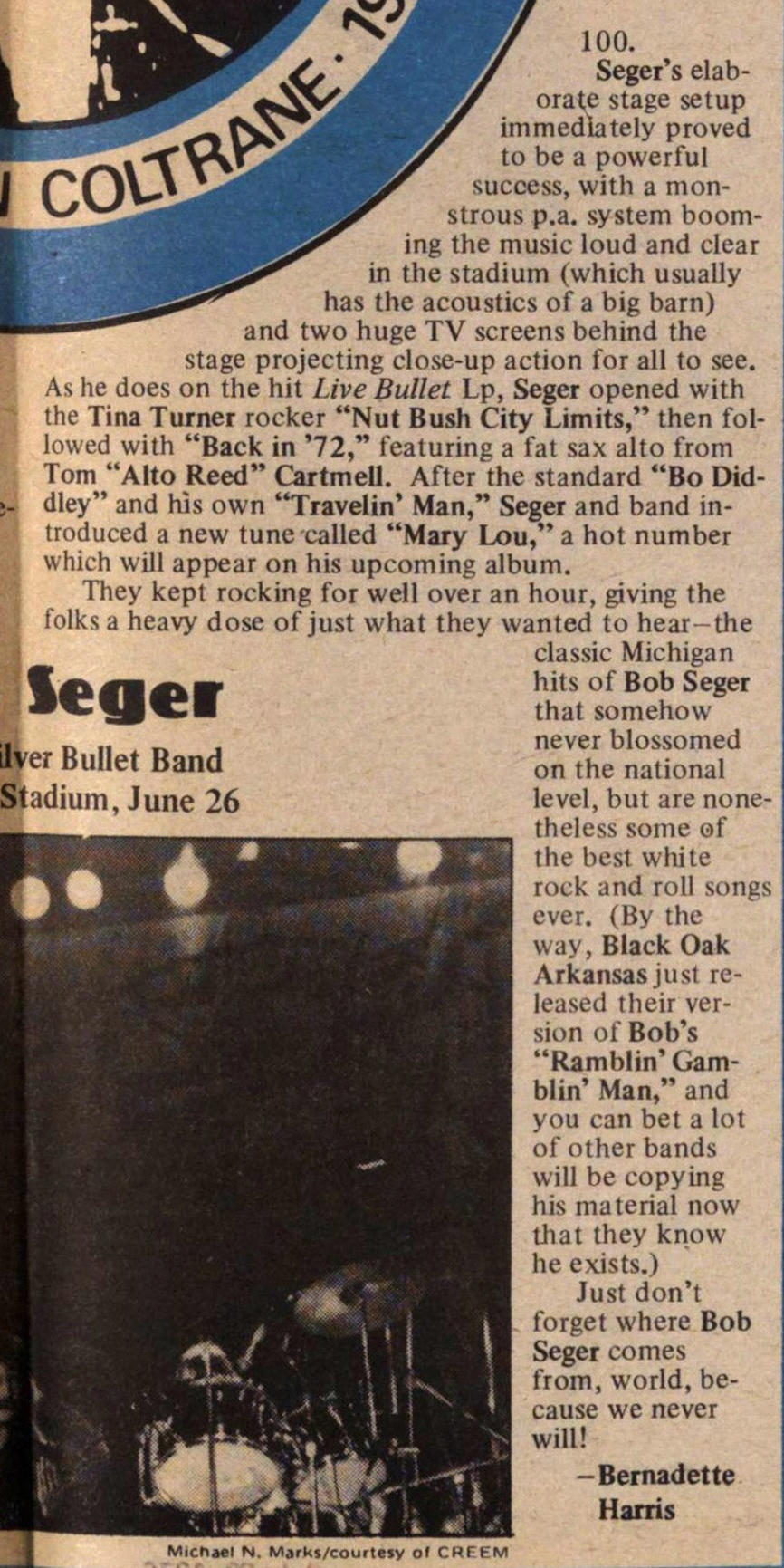 No one held back a shriek as time neared for the entrance of Bob Seger and the Silver Bullet Band. Firecrackers were in abundance that night, but most of the crowd of 60,000 that filled Pon-Met Stadium waited patiently through the preceding acts-Todd Rundgren and Utopia and Elvin Bishop. They played competently, but the overwhelming feeling in the big football palace was that everyone was here to see Seger-and not much else mattered.

This was, after all, a glorious moment for the home grown rock and roll genius. It takes the biggest stars in show business (such as The Who, Elvis, and Elton John) to fill Pon-Met, but tonite the crowd that packed the place had come to hear a local hero who had struggled for ten years to get a piece of the recognition that his mastery of high-energy rock and roll deserved.

After an hour's worth of equipmenl setup, Seger finally gave the crowd its cue with a seering "Hayyyyyyy Deeeetroit,"and hysteria started to erupt as the big firecrackers boomed out and matches, lighters, makeshift paper torches, and sparklers blazed in the darkness. The place shook with a huge spontaneous roar of welcome for Detroit's "ten year secret" who's finally made it to the light of national acceptance with a live double album right in the middle of Billboard's Top 100.

Seger's elaborate stage setup immediately proved to be a powerful success, with a monstrous p.a. system booming the music loud and clear in the stadium (which usually has the acoustics of a big barn) and two huge TV screens behind the stage projecting close-up action for all to see. As he does on the hit Live Bullet Lp, Seger opened with the Tina Turner rocker "Nut Bush City Limits," then followed with "Back in '72," featuring a fat sax alto from Torn "Alto Reed" Cartmell. After the standard "Bo Diddley" and his own 'Travelin' Man," Seger and band introduced a new tune called "Mary Lou,"a hot number which will appear on his upcoming album.

They kept rocking for well over an hour, giving the folks a heavy dose of just what they wanted to hear-the classic Michigan hits of Bob Seger that somehow never blossomed on the national level, but are nonetheless some of the best white rock and roll songs ever. (By the way, Black Oak Arkansas just released their version of Bob's "Rambling Gamblin' Man," and you can bet a lot of other bands will be copying his material now that they know he exists.)

Just don't forget where Bob Seger comes from, world, because we never will!