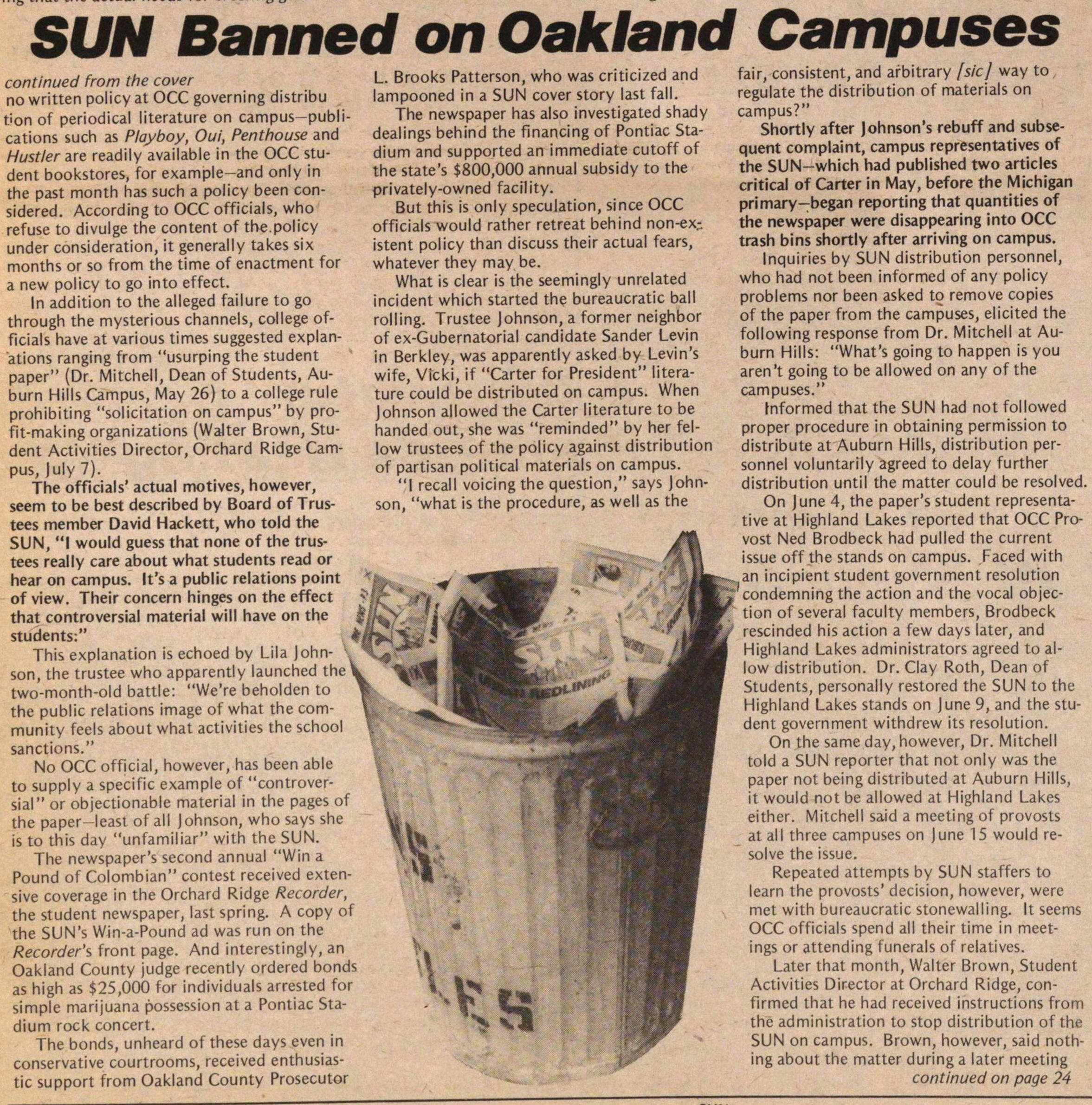 In what appears to be a direct attack on the First Amendment, administrators at Oakland Community College have in effect banned the SUN from distributing free copies of the newspaper on the three campuses currently in session (Auburn Hills, Orchard Ridge, and Highland Lakes).

Although there is no existing college policy on the distribution of non-partisan literature on the campuses, and college officials have refused to offer any clear and consistent rationale for their actions, hundreds of copies of the SUN have been discarded since mid-May, often by top-ranking college officials themselves.

Attempts by SUN distribution employees and reporters to resolve the issue agreeably, or even lo obtain an official explanation and affix responsibility for the actions, have been met with silence, evasions, bureaucratie buck-passing, and conflicting statements.

The SUN has established, however, that the banning originated with a vendetta by an OCC trustee disgruntled by the college's rule against distribution of partisan political literature, and rapidly grew into an attempt by the Board of Trustees to ban the SUN because of its content.

According to a July 8 legal memorandum from attorney Charles Porter to OCC President Joe Hill (no relation to the labor organizer), "Recently the college was faced with the attempted distribution on college property of a tabloid of the underground variety. Because of the nature of the publication, the college administration felt compelled to prohibit distribution on college property."

In an attempt to justify this prohibition legally, Porter wrote, "Where student activity is involved, the law does not grant students a license to engage in any behavior that they choose." He also pointed to the "general right" of the college to regulate the activities of non students, although the paper's representatives at the OCC campuses are all students there.

Porter also cited a U.S. Supreme Court decision which held that if student conduct disrupted classwork and invaded the rights of others, it could be prohibited by the college. However, he failed to mention any disturbances or infringements of individual rights resulting from the SUN's presence, nor have any such incidents been reported elsewhere.

In fact, the only rationale offered by various OCC officials for surreptitiously tossing hundreds of copies of the paper in the trash has been its alleged failure to obtain proper permission to distribute the publication- despite the fact that SUN distribution personnel, even in the absence of any written procedure for obtaining such permission, received the go-ahead at each campus as early as March from both student governments and administrators.

The truth is that at this writing, there is still  no written policy at OCC governing distribution of periodical literature on campus-publications such as Playboy, Oui, Penthouse and Hustler are readily available in the OCC student bookstores, for example-and only in the past month has such a policy been considered. According to OCC officials, who refuse to divulge the content of the policy under consideration, it generally takes six months or so from the time of enactment for a new policy to go into effect.

The officials' actual motives, however, seem to be best described by Board of Trustees member David Hackett, who told the SUN, "I would guess that none of the trustees really care about what students read or hear on campus. It's a public relations point of view. Their concern hinges on the effect ; that controversial material will have on the students:"

This explanation is echoed by Lila Johnson, the trustee who apparently launched the  two-month-old battle: "We're beholden to the public relations image of what the community feels about what activities the school sanctions."

No OCC official, however, has been able to supply a specific example of "controversial" or objectionable material in the pages of the paper-least of all Johnson, who says she is to this day "unfamiliar" with the SUN.

The newspaper's second annual "Win a Pound of Colombian" contest received extensive coverage in the Orchard Ridge Recorder, the student newspaper, last spring. A copy of the SUN's Win-a-Pound ad was run on the Recorder's front page. And interestingly, an Oakland County judge recently ordered bonds as high as $25,000 for individuals arrested for simple marijuana possession at a Pontiac Stadium rock concert.

The bonds, unheard of these days even in conservative courtrooms, received enthusiastic support from Oakland County Prosecutor L. Brooks Patterson, who was criticized and lampooned in a SUN cover story last fall.

The newspaper has also investigated shady dealings behind the financing of Pontiac Stadium and supported an immediate cutoff of the state's $800,000 annual subsidy to the privately-owned facility.

But this is only speculation, since OCC officials would rather retreat behind non-existent policy than discuss their actual fears, whatever they may be.

What is clear is the seemingly unrelated incident which started the bureaucratic ball rolling. Trustee Johnson, a former neighbor of ex-Gubernatorial candidate Sander Levin in Berkley, was apparently asked by Levin's wife, Vtcki, if "Carter for President" literature could be distributed on campus. When Johnson allowed the Carter literature to be handed out, she was "reminded" by her fellow trustees of the policy against distribution of partisan political materials on campus. "I recall voicing the question," says Johnson, "what is the procedure, as well as the fair, consistent, and arbitrary sic way to regulate the distribution of materials on campus?"

Shortly after Johnson's rebuff and subsequent complaint, campus representatives of the SUN-which had published two articles critical of Carter in May, before the Michigan primary- began reporting that quantities of the newspaper were disappearing into OCC trash bins shortly after arriving on campus.

Inquiries by SUN distribution personnel, who had not been informed of any policy problems nor been asked to remove copies of the paper from the campuses, elicited the following response from Dr. Mitchell at Auburn Hills: "What's going to happen is you aren 't going to be allowed on any of the campuses."

Informed that the SUN had not followed proper procedure in obtaining permission to distribute at Auburn Hills, distribution personnel voluntarily agreed to delay further distribution until the matter could be resolved.

On June 4, the paper's student representative at Highland Lakes reported that OCC Provost Ned Brodbeck had pulled the current issue off the stands on campus. Faced with an incipient student government resolution 'condemning the action and the vocal objection of several faculty members, Brodbeck rescinded his action a few days later, and Highland Lakes administrators agreed to allow distribution. Dr. Clay Roth, Dean of Students, personally restored the SUN to the Highland Lakes stands on June 9, and the student government withdrew its resolution.

On the same day, however, Dr. Mitchell told a SUN reporter that not only was the paper not being distributed at Auburn Hills, it would not be allowed at Highland Lakes either. Mitchell said a meeting of provosts at all three campuses on June 15 would resolve the issue.

Repeated attempts by SUN staffers to learn the provosts' decision, however, were met with bureaucratie stonewalling. It seems OCC officials spend all their time in meetings or attending funerals of relatives.

Later that month, Walter Brown, Student Activities Director at Orchard Ridge, confirmed that he had received instructions from the administration to stop distribution of the SUN on campus. Brown, however, said nothing about the matter during a later meeting with the newspaper's campus representative, although copies were still ending up in the trash. "I have too much at stake to get caught in the middle of this thing," commented Brown.

SUN staff members were allowed to distribute the paper at Auburn Hills on July 2 and 7, but in each case copies were found in the trash within minutes of their distribution. In the latter case, a janitor referred the SUN to James Ingram, Director of the Student Union Building, who confessed to the deed. "

Check it out with the dean or the provost," Ingram instructed. "They said it was too controversial- too many students were getting involved. They have been jumping all over me about it."

The SUN's attempts to ferret out the elusive administrators met with no success. Nor has the newspaper received any word on the results of the Board of Trustees' recent meeting, where the issue was to be once again hashed over.

Apparently, trustee Johnson 's challenge to the right of the SUN to be distributed on the OCC campuses drew the attention of backward elements in Oakland County. College officials, in a panicked attempt to pacify these elements and maintain their "image" as producers of wholesome young scholars, authorized and participated in a campaign of sabotage against the newspaper- while attempting to hurriedly concoct a legal rationale for their actions.

In return, the newspaper is presently considering possible legal action against the college and ts officials to protect ts First Amendment rights and restore the paper to the OCC campuses.

Research for this article was conducted by Dorothy Sounders, a Detroit-based free-lance writer, Jan Prezzato, Assistant to the Editor, and other members of the SUN staff.