High Court Up For Grabs-will Dems Fumble It? 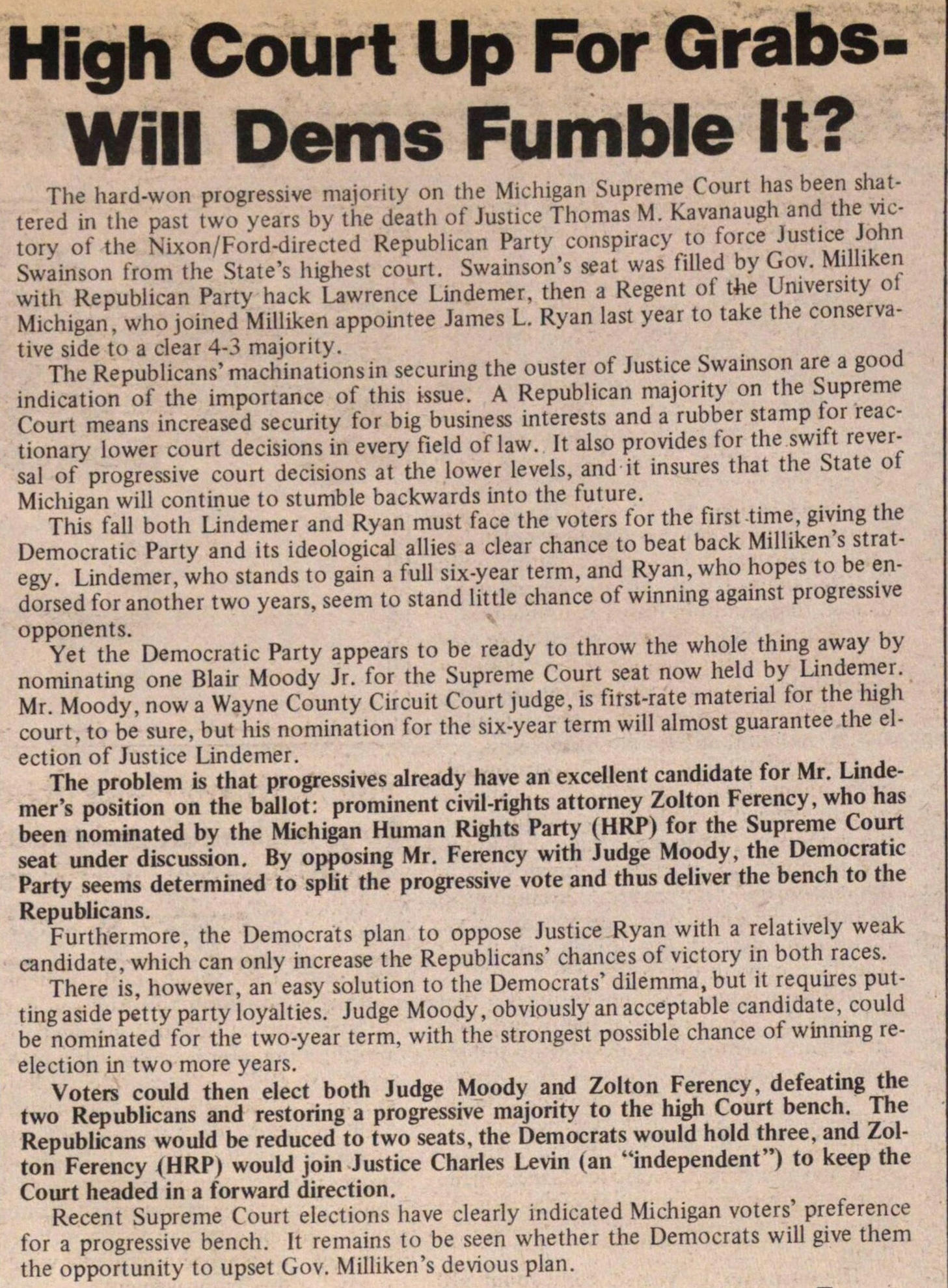 The hard-won progressive majority on the Michigan Supreme Court has been shattered in the past two years by the death of Justice Thomas M. Kavanaugh and the victory of the Nixon/Ford-directed Republican Party conspiracy to force Justice John Swainson from the State's highest court. Swainson's seat was filled by Goy. Milliken with Republican Party hack Lawrence Lindemer, then a Regent of the University of Michigan, who joined Milliken appointee James L. Ryan last year to take the conservative side to a clear 4-3 majority

The Republicans' machinations in securing the ouster of Justice Swainson are a good indication of the importance of this issue. A Republican majority on the Supreme Court means increased security for big business interests and a rubber stamp tor reactionary lower court decisions in every field of law. It also provides for the swift reversal of progressive court decisions at the lower levels, and it insures that the State of Michigan will continue to stumble backwards into the future.
This fall both Lindemer and Ryan must face the voters for the first-time giving the Democratic Party and its ideological allies a clear chance to beat back Milliken s strategy. Lindemer, who stands to gain a full six-year term, and Ryan, who hopes to be endorsed for another two years, seem to stand little chance of winning against progressive opponents

Yet the Democratic Party appears to be ready to throw the whole thing away by nominating one Blair Moody Jr. for the Supreme Court seat now held by Lindemer. Mr . Moody now a Wayne County Circuit Court judge, is first-rate material for the high court, to be sure, but his nomination for the six-year term will almost guarantee the election of Justice Lindemer.

The problem is that progressives already have an excellent candidate tor Mr. Lindemer's position on the ballot: prominent civil-rights attorney Zolton Ferency, who has been nominated by the Michigan Human Rights Party (HRP) for the Supreme Court seat under discussion. By opposing Mr. Ferency with Judge Moody, the Democratic Party seems determined to split the progressive vote and thus deliver the bench to the Republicans.

Furthermore, the Democrats plan to oppose Justice Ryan with a relatively weak candidate, which can only increase the Republicans' chances of victory in both races. There is, however, an easy solution to the Democrats' dilemma, but it requires putting aside petty party loyalties. Judge Moody, obviously an acceptable candidate, could be nominated for the two-year term, with the strongest possible chance of winning reelection in two more years.

Voters could then elect both Judge Moody and Zolton Ferency, defeating the two Republicans and restoring a progressive majority to the high Court bench. The Republicans would be reduced to two seats, the Democrats would hold three, and Zolton Ferency (HRP) would join Justice Charles Levin (an "independent") to keep the Court headed in a forward direction.

Recent Supreme Court elections have clearly indicated Michigan voters preference for a progressive bench. It remains to be seen whether the Democrats will give them the opportunity to upset Gov. Milliken's devious plan.