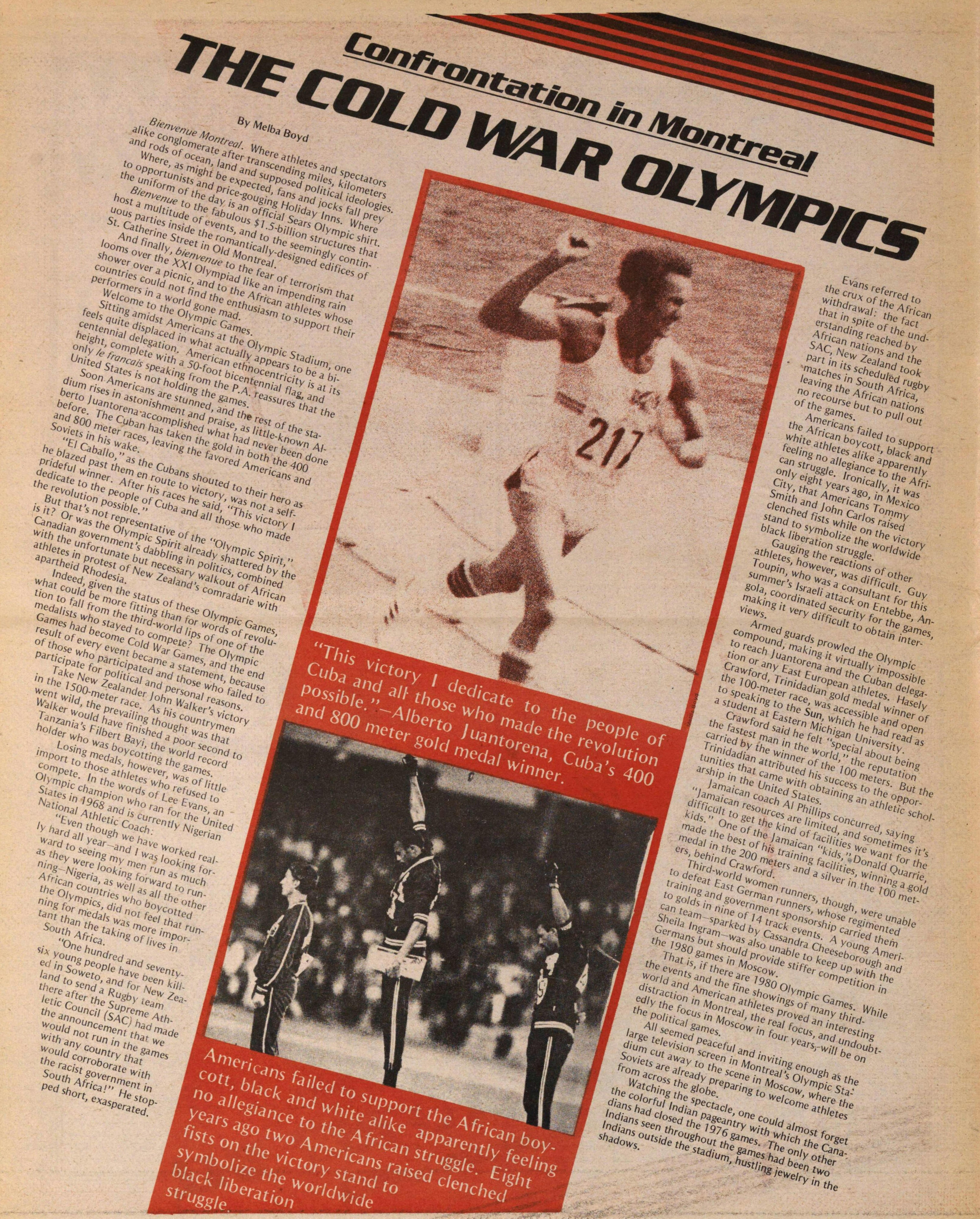 Where, as might be expected, fans and jocks fall prey to opportunists and price-gouging Holiday Inns. Where the uniform of the day is an official Sears Olympic shirt.

Bienvenue to the fabulous $1.5-billion structures that host a multitude of events, and to the seemingly continuous parties inside the romantically-designed edifices of St. Catherine Street in Old Montreal.

And finally, bienvenue to the fear of terrorism that looms over the XXI Olympiad like an impending rain shower over a picnic, and to the African athletes whose countries could not find the enthusiasm to support their performers in a world gone mad.

Welcome to the Olympic Games.

Sitting amidst Americans at the Olympic Stadium, one feels quite displaced in what actually appears to be a bicentennial delegation. American ethnocentricity is at its height, complete with a 50-foot bicentennial flag, and only le francais speaking from the P.A. reassures that the United States is not holding the games.

Soon Americans are stunned, and the rest of the stadium rises in astonishment and praise, as little-known Alberto Juantorena accomplished what had never been done before. The Cuban has taken the gold in both the 400 and 800 meter races, leaving the favored Americans and Soviets in his wake.

"El Caballo," as the Cubans shouted to their hero as he blazed past them en route to victory, was not a self-prideful winner. After his races he said, "This victory I dedicate to the people of Cuba and all those who made the revolution possible."

But that's not representative of the "Olympic Spirit," is it? Or was the Olympic Spirit already shattered by the Canadian government's dabbling in politics, combined with the unfortunate but necessary walkout of African athletes in protest of New Zealand's comradery with apartheid Rhodesia.

Indeed, given the status of these Olympic Games, what could be more fitting than for words of revolution to fall from the third-world lips of one of the medalists who stayed to compete? The Olympic Games had become Cold War Games, and the end result of every event became a statement, because of those who participated and those who failed to participate for political and personal reasons.

Take New Zealander John Walker's victory in the 1500-meter race. As his countrymen went wild, the prevailing thought was that Walker would have finished a poor second to Tanzania's Filbert Bayi, the world record holder who was boycotting the games.

Losing medals, however, was of little import to those athletes who refused to compete. In the words of Lee Evans, an Olympic champion who ran for the United States in 1968 and is currently Nigerian National Athletic Coach:

"Even though we have worked really hard all year - and I was looking forward to seeing my men run as much as they were looking forward to running - Nigeria, as well as all the other African countries who boycotted the Olympics, did not feel that running for medals was more important than the taking of lives in South Africa.

"One hundred and seventy-six young people have been killed in Soweto, and for New Zealand to send a Rugby team there after the Supreme Athletic Council (SAC) had made the announcement that we would not run in the games with any country that would corroborate with the racist government in South Africa!" He stopped short, exasperated.

Evans referred to the crux of the African withdrawal: the fact that in spite of the understanding reached by African nations and the SAC, New Zealand took part in its scheduled rugby matches in South Africa, leaving the African nations no recourse but to pull out of the games.

Americans failed to support the African boycott, black and white athletes alike apparently feeling no allegiance to the African struggle. Ironically, it was only eight years ago, in Mexico City, that Americans Tommy Smith and John Carlos raised clenched fists while on the victory stand to symbolize the worldwide black liberation struggle.

Gauging the reactions of the other athletes, however, was difficult. Guy Toupin, who was a consultant for this summer's Israeli attack on Entebbe, Angola, coordinated security for the games, making it very difficult to obtain interviews.

Armed guards prowled the Olympic compound, making it virtually impossible to reach Juantorena and the Cuban delegation or any East European athletes. Hasely Crawford, Trinidadian gold medal winner of the 100-meter race, was accessible and open to speaking to the Sun, which he had read as a student at Eastern Michigan University.

Crawford said he felt "special about being the fastest man in the world," the reputation carried by the winner of the 100 meters. But the Trinidadian attributed his success to the opportunities that came with obtaining an athletic scholarship in the United States.

Jamaican coach Al Phillips concurred, saying "Jamaican resources are limited, and sometimes it's difficult to get the kind of facilities we want for the kids." One of the Jamaican "kids," Donald Quarrie, made the best of his training facilities, winning a gold medal in the 200 meters and a silver in the 100 meters, behind Crawford.

Third-world women runners, though, were unable to defeat East German runners, whose regimented training and government sponsorship carried them to golds in nine of 14 track events. A young American team - sparked by Cassandra Cheeseborough and Sheila Ingram - was also unable to keep up with the Germans but should provide stiffer competition in the 1980s games in Moscow.

That is, if there are 1980 Olympic Games. While the events and the fine showings of many third-world and American athletes proved an interesting distraction in Montreal, the real focus, and undoubtedly the focus in Moscow in four years, will be on the political games.

All seemed peaceful and inviting enough as the large television screen in Montreal's Olympic Stadium cut away to the scene in Moscow, where the Soviets are already preparing to welcome athletes from across the globe.

Watching the spectacle, one could almost forget the colorful Indian pageantry with which the Canadians had closed the 1976 games. The only other Indians seen throughout the games had been two Indians outside the stadium, hustling jewelry in the shadows.