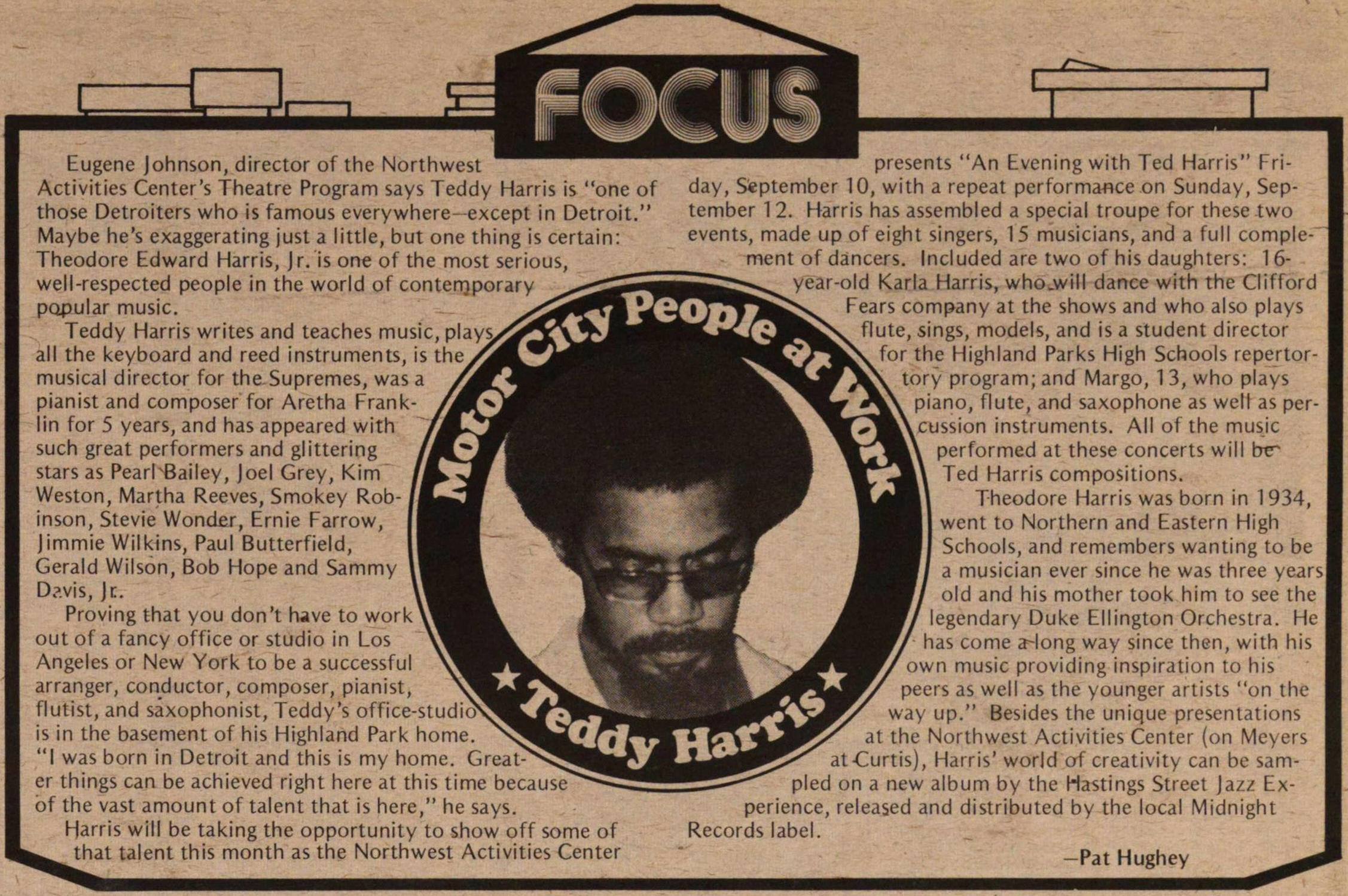 Eugene Johnson, director of the Northwest Activities Center's Theatre Program says Teddy Harris is "one of those Detroiters who is famous everywhere- except in Detroit." Maybe he's exaggerating just a little, but one thing is certain: Theodore Edward Harris. Ir. is one of the most serious, well-respected people n the world of contemporary popular music. v Teddy Harris writes and teaches music, plays all the keyboard and reed nstruments, is the musical director for the.Supremes, was a A pianist and composer for Aretha Franklin for 5 years, and has appeared with such great performers and glittering stars as PearbBailey, Joel Grey, Kim i Weston, Martha Reeves, Smokey ƒ inson, Stevie Wonder, Ernie Farrow, Jimmie Wilkins, Paul Butterfield, Gerald Wilson, Bob Hope and Sammy l D?.vis, Je. ) Proving that you don't have to workl out of a fancy office or studio in Los V Angeles or New York to be a successful arranger, conductor, composer, pianist, flutist, and saxophonist, Teddy's office-studio is in the basement of nis Highland Park home. I was bom in Detroit and this s my home. Great- er things can be achieved right here at this time because óf the vast amount of talent that s here," he says. Marris will be taking the opportunity to show off some of that talent this month as the Northwest Activities Center presents "Art Evening with Ted Harris" day, September 10, with a repeat performance on Sunday, September 1 2. Harris has assembled a special troupe for these two events, made up of eight singers, 15 musicians, and a full comple- ment of dancers. Included are two of his daughters: 16„ year-old Karla Harris, who.will dance with the Clifford Fears company at the shows and who also plays flute, sings, models, and is a student director N. for the Highland Parks High Schools tory program; and Margo, 1 3, who plays piano, flute, and saxophone as welt as perVcussion nstruments. All of the music performed at these concerts will be1 w Ted Harris compositions. I Theodore Harris was born in 1934, went to Northern and Eastern High Schools, and remembers wanting to be ï a musician ever since he was three years 7 oíd and his mother took him to see the f egendary Duke Ellington Orchestra. He has come along way since then, with his y own music providing inspiration to his peers as well as the younger artists "on the way up." Besides the unique presentations f at the Northwest Activities Center (on Meyers at -Curtís), Harris' world of creativity can be pled on a new album by the Hastings Street Jazz Experience, released and distributed by the local Midnight Records label.