Detroit's Michael Henderson Out Front and On Top 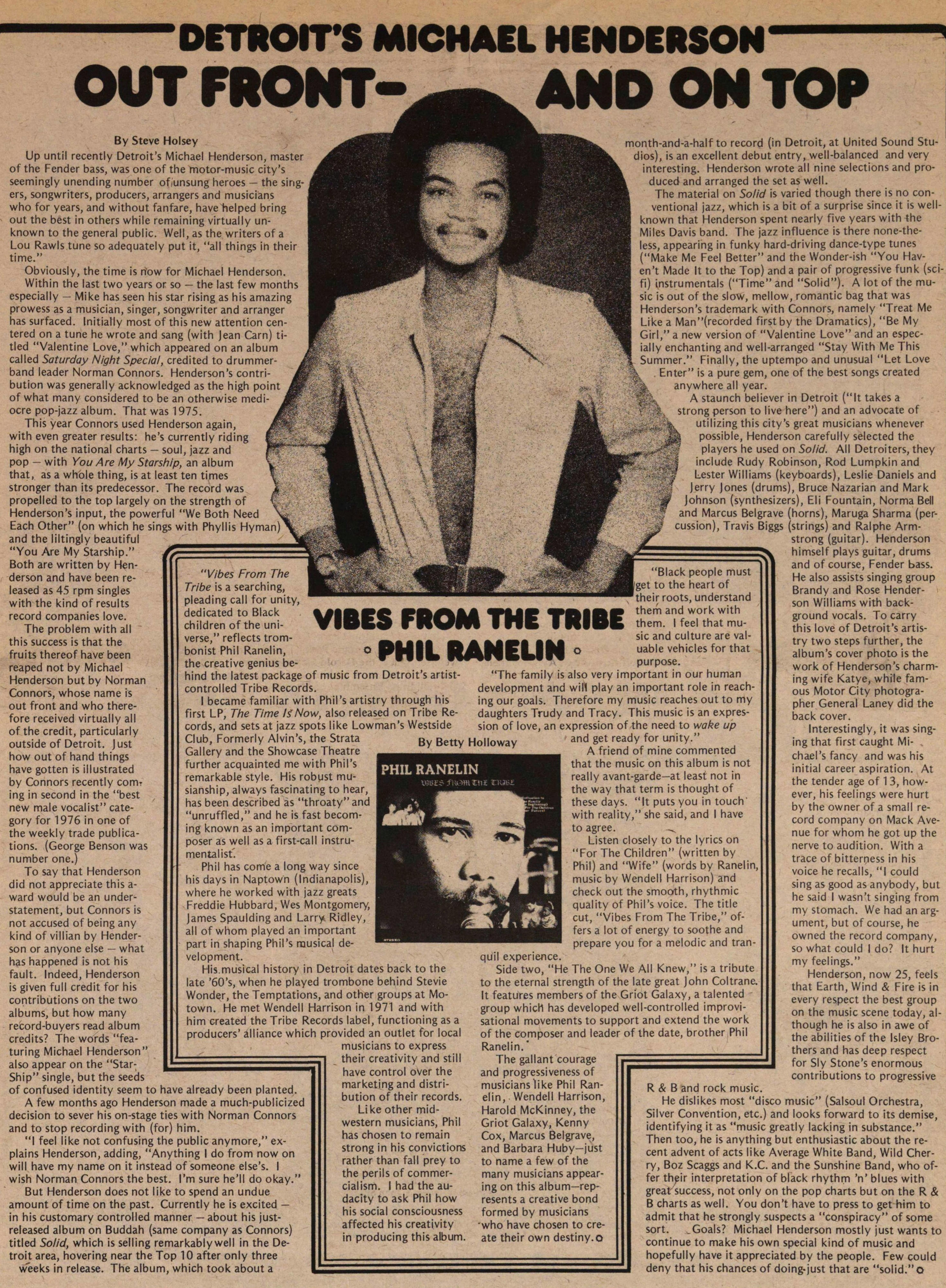 Up until recently Detroit's Michael Henderson, master of the Fender bass, was one of the motor-music city's seemingly unending number of unsung heroes - the singers, songwriters, producers, arrangers and musicians who for years, and without fanfare, have helped bring out the best in others while remaining virtually unknown to the general public. Well, as the writers of a Lou Rawls tune so adequately put it, "all things in their time."

Obviously, the time is now for Michael Henderson. Within the last two years or so - the last few months especially - Mike has seen his star rising as his amazing prowess as a musician, singer, songwriter and arranger has surfaced. Initially most of this new attention centered on a tune he wrote and sang (with Jean Carn) titled Valentine Love," which appeared on an album called Saturday Night Special, credited to drummer band leader Norman Connors. Henderson's contribution was generally acknowledged as the high point of what many considered to be an otherwise mediocre pop-jazz album. That was 1975.

This year Connors used Henderson again, with even greater results: he's currently riding high on the national charts - soul, jazz and pop - with You Are My Starship, an album that, as a whole thing, at least ten times stronger than its predecessor. The record was propelled to the top largely on the strength of Henderson's input, the powerful "We Both Need Each Other" (on which he sings with Phyllis Hyman) and the liltingly beautiful "You Are My Starship." Both are written by Henderson and have been released as 45 rpm singles with the kind of results record companies love.

The problem with all this success is that the fruits thereof have been reaped not by Michael Henderson but by Norman Connors, whose name is out front and who therefore received virtually all of the credit, particularly outside of Detroit. Just how out of hand things have gotten is illustrated by Connors recently coming in second in the "best new male vocalist" category for 1976 in one of the weekly trade publications. (George Benson was number one.)

To say that Henderson did not appreciate this award would be an understatement, but Connors is not accused of being any kind of villian by Henderson or anyone else - what has happened is not his fault. Indeed, Henderson is given full credit for his contributions on the two albums, but how many record-buyers read album credits? The words "featuring Michael Henderson" also appear on the "StarShip" single, but the seeds of confused identity seem to have already been planted.

A few months ago Henderson made a much-publicized decision to sever his on-stage ties with Norman Connors and to stop recording with (for) him.

"I feel like not confusing the public anymore," explains Henderson, adding, "Anything I do from now on will have my name on it instead of someone else's. I wish Norman Connors the best. l'm sure he'll do okay."

But Henderson does not like to spend an undue amount of time on the past. Currently he is excited - in his customary controlled manner - about his just released album on Buddah (same company as Connors) titled Solid, which is selling remarkably well in the Detroit area, hovering near the Top 10 after only three weeks in release. The album, which took about a month-and-a-half to record (in Detroit, at United Sound Studios), is an excellent debut entry, well-balanced and very nteresting. Henderson wrote all nine selections and produced and arranged the set as well.

The material on Solid is varied though there is no conventional jazz, which is a bit of a surprise since it is known that Henderson spent nearly five years with the Miles Davis band. The jazz influence is there nonetheless, appearing in funky hard-driving dance-type tunes ("Make Me Feel Better" and the Wonder-ish "You Haven't Made It to the Top) and a pair of progressive funk (scifi) instrumentals ("Time" and "Solid"). A lot of the music is out of the slow, mellow, romantic bag that was Henderson's trademark with Connors, namely "Treat Me Like a Man"(recorded first by the Dramatics), "Be My Girl," a new version of "Valentine Love" and an especially enchanting and well-arranged "Stay With Me This Summer." Finally, the uptempo and unusual "Let Love Enter" is a pure gem, one of the best songs created anywhere all year.

Interestingly, it was singing that first caught Michael's fancy and was his initial career aspiration. At the tender age of 13, however, his feelings were hurt by the owner of a small record company on Mack Avenue for whom he got up the nerve to audition. With a trace of bitterness in his voice he recalls, "I could sing as good as anybody, but he said I wasn't singing from my stomach. We had an argument, but of course, he owned the record company, so what could I do? It hurt my feelings."

Henderson, now 25, feels that Earth, Wind & Fire is in every respect the best group on the music scene today, although he is also in awe of the abilities of the Isley Brothers and has deep respect for Sly Stone's enormous contributions to progressive R & B and rock music. He dislikes most "disco music" (Salsoul Orchestra, Silver Convention, etc.) and looks forward to its demise, identifying it as "music greatly lacking in substance." Then too, he is anything but enthusiastic about the recent advent of acts like Average White Band, Wild Cherry, Boz Scaggs and K.C. and the Sunshine Band, who offer their interpretation of black rhythm 'n' blues with great success, not only on the pop charts but on the R & B charts as well. You don't have to press to get him to admit that he strongly suspects a "conspiracy" of some sort. Goals? Michael Henderson mostly just wants to continue to make his own special kind of music and hopefully have it appreciated by the people. Few could deny that his chances of doing-just that are "solid."