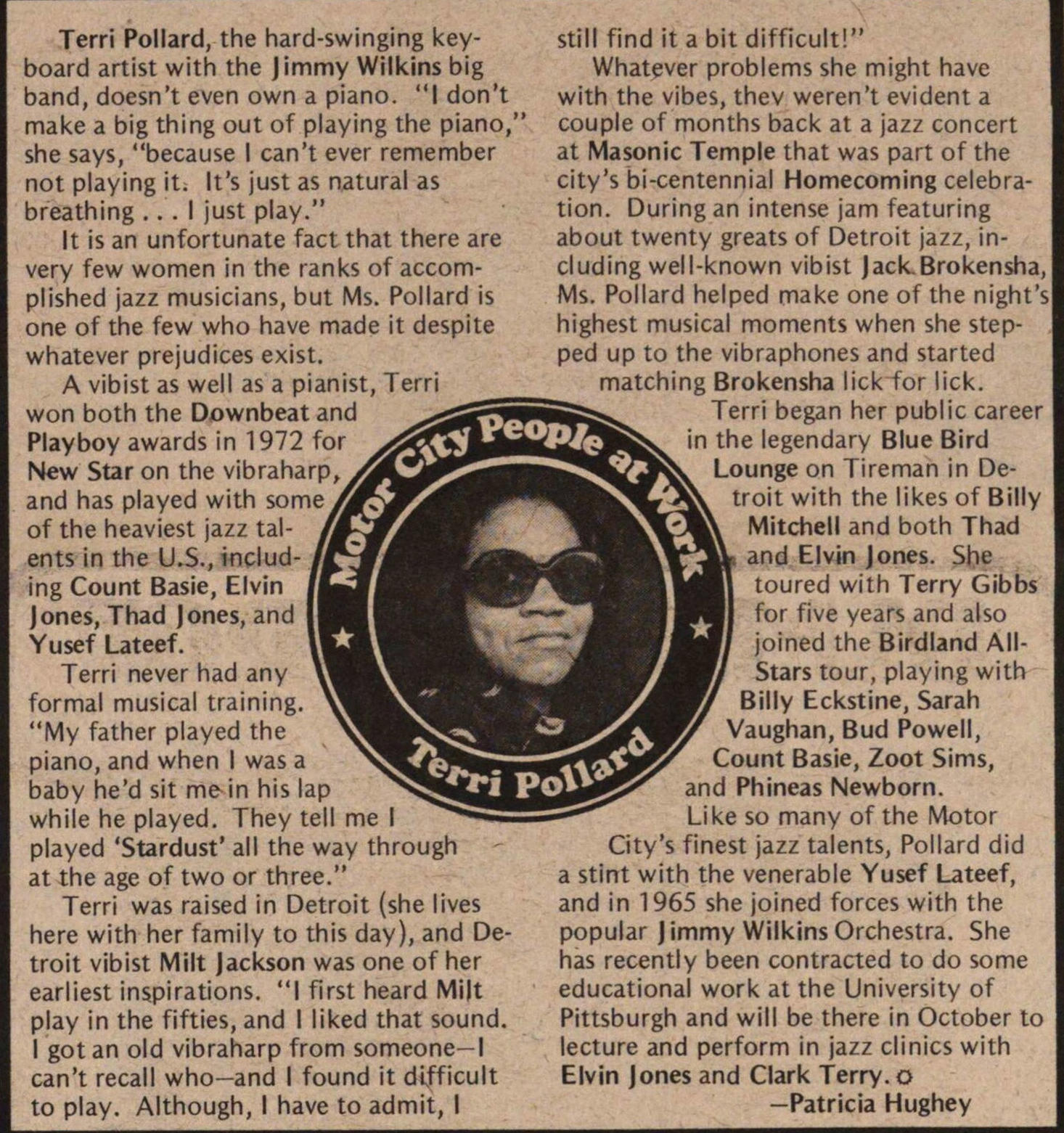 Terri Pollard, the hard-swinging keyboard artist with the Jimmy Wilkins big band, doesn't even own a piano. "I don't make a big thing out of playing the piano," she says, "because I can't ever remember not playing it. It's just as natural as breathing ... I just play."

It is an unfortunate fact that there are very few women in the ranks of accomplished jazz musicians, but Ms. Pollard is one of the few who have made t despite whatever prejudices exist.

A vibist as well as a pianist, Terri won both the Downbeat Playboy awards in 1972 New Star on the vibraharp, and has played with some of the heaviest jazz talents in the U.S., including Count Basie, Elvin Jones, Thad Jones, and Yusef Lateef.

Terri never had any formal musical training. "My father played the piano, and when I was a baby he'd sit me in his lap while he played. They tell me I played 'Stardust' all the way through at the age of two or three."

Terri was raised in Detroit (she lives here with her family to this day), and Detroit vibist Milt Jackson was one of her earliest inspirations. "I first heard Milt play in the fifties, and I liked that sound. I got an old vibraharp from someone- I can't recall who- and I found it difficult to play. Although, I have to admit, I still find it a bit difficult!"

Whatever problems she might have with the vibes, they weren't evident a couple of months back at a jazz concert at Masonic Temple that was part of the city's bi-centennial Homecoming celebration. During an intense jam featuring about twenty greats of Detroit jazz, including well-known vibist Jack Brokensha, Ms. Pollard helped make one of the night's highest musical moments when she stepped up to the vibraphones and started matching Brokensha lick for lick.

Like so many of the Motor City s finest jazz talents, Pollard did a stint with the venerable Yusef Lateef, and in 1965 she joined forces with the popular Jimmy Wilkins Orchestra. She has recently been contracted to do some educational work at the University of Pittsburgh and will be there in October to lecture and perform in jazz clinics with Elvin Jones and Clark Terry.