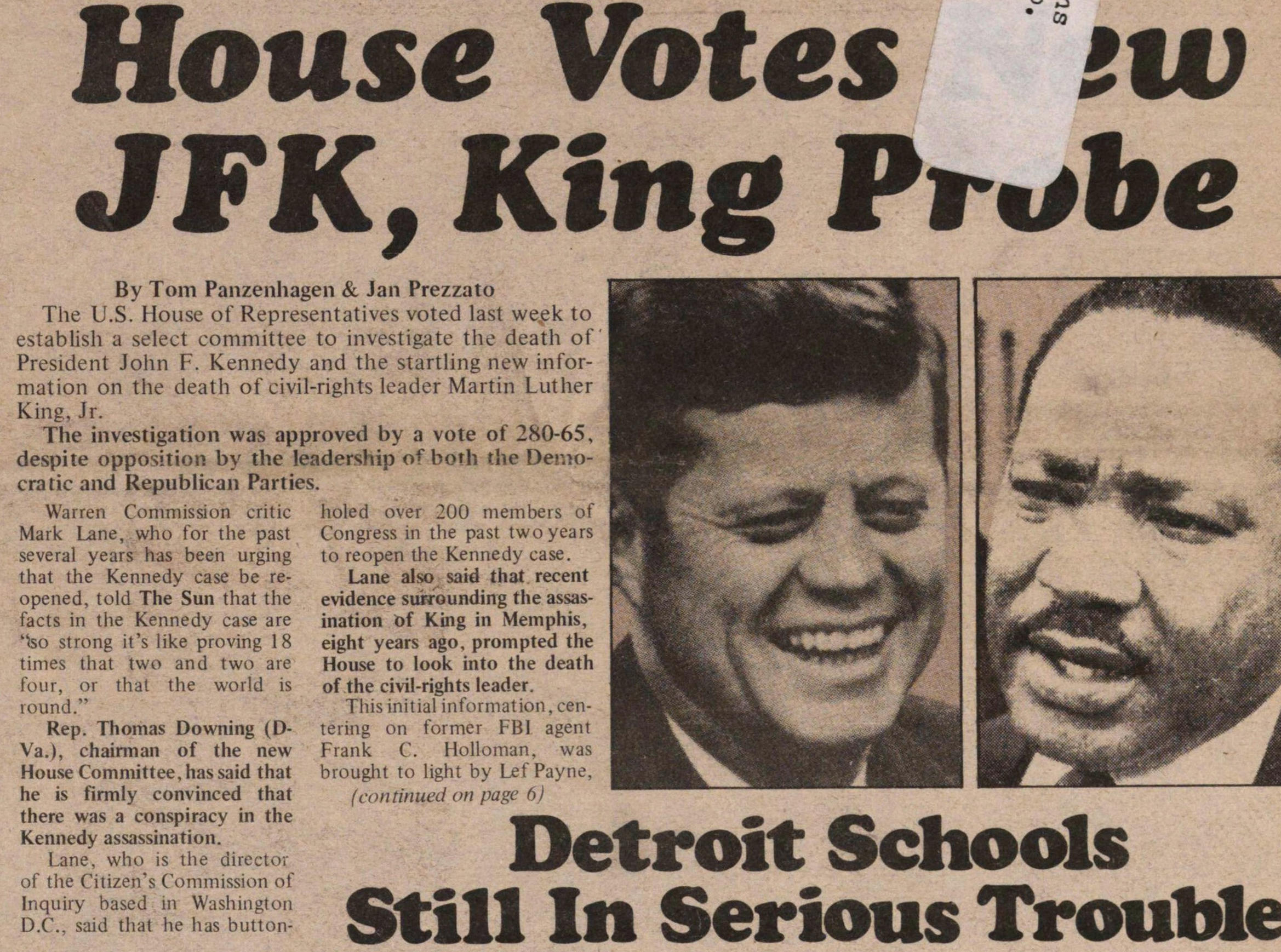 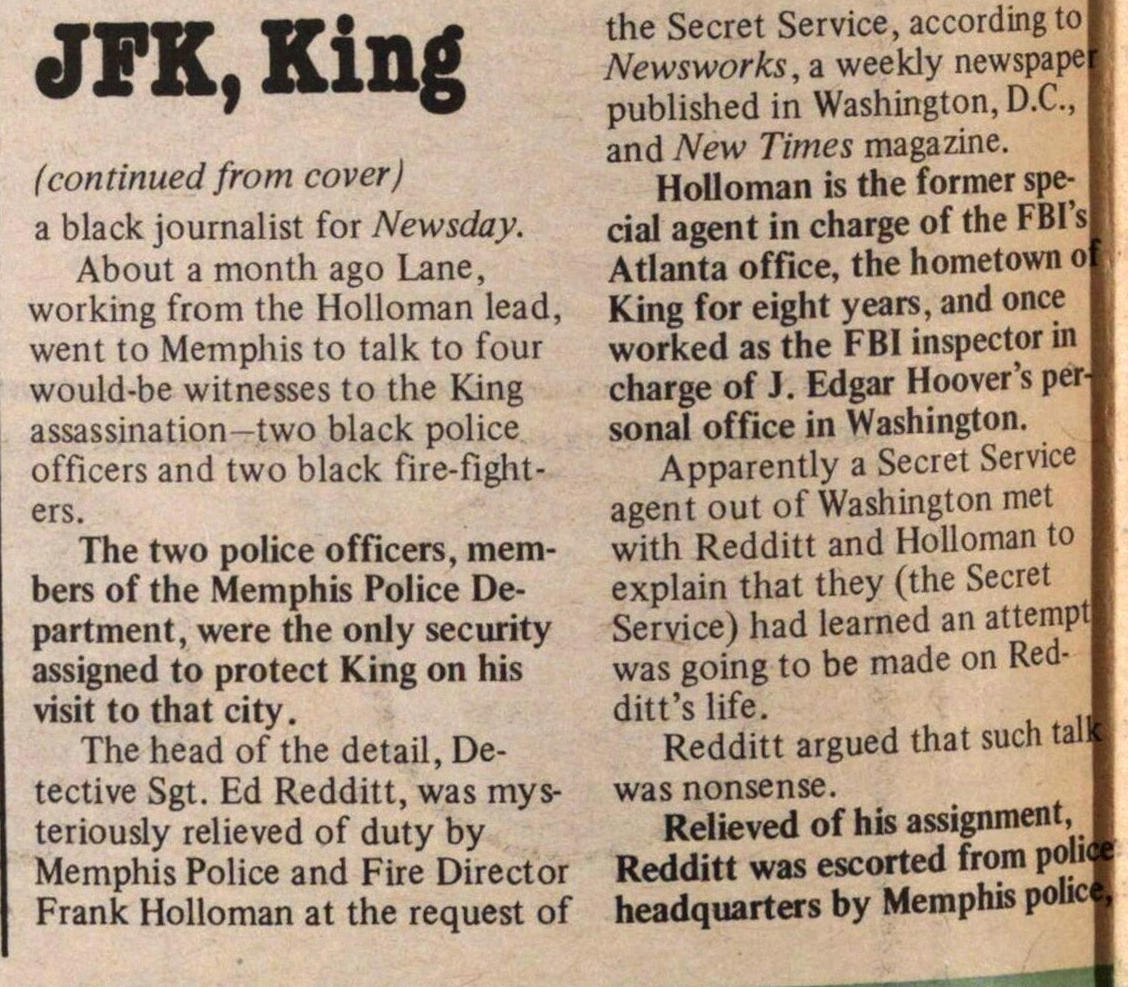 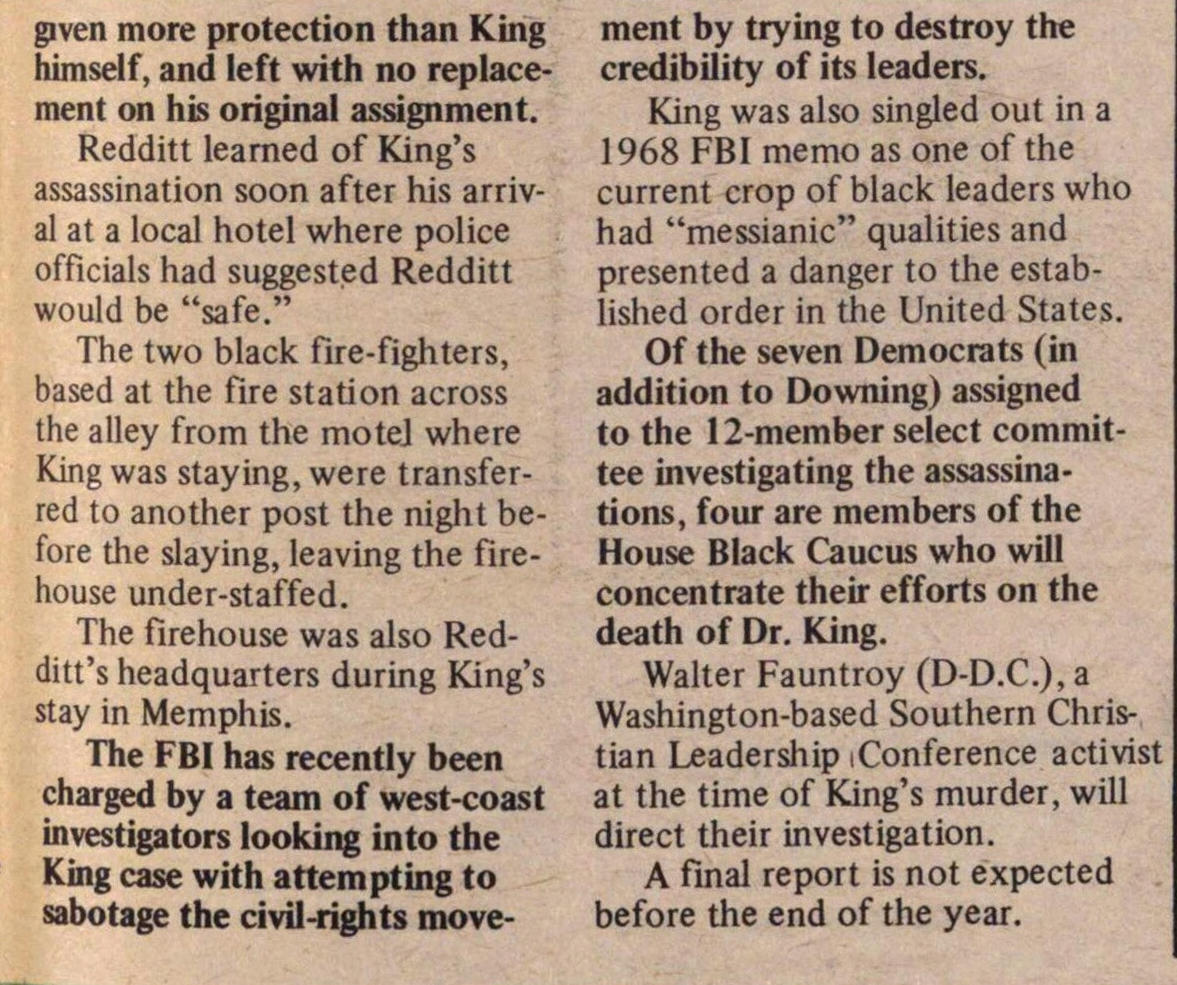 The U.S. House of Representatives voted last we„ek to establish a select committee to investígate the death of President John F. Kennedy and the startling new information on the death of civil-rights leader Martin Luther King, Jr. The investiga tion was approved by a vote of 280-65, despite opposition by the leadership of both the Democratie and Republican Parties. Warren Commission critic Mark Lane, who tor the past several years has been urging that the Kennedy case be reopened, told The Sun that the facts in the Kennedy case are 'tso strong t's like proving 18 times that two and two are four, or that the world is round." Rep. Thomas Downing (DVa.), chairman of the new House Committee.hassaid that he is firmly convinced that there was a conspiracy in the Kennedy assassination. Lane, who is the director of the Citizen's Commission of Inquiry based in Washington D.C.. said that he has holed over 200 members of Congress in the past twoyears to reopen the Kennedy case. Lane also said that recent evidence surrounding the assasination of King in Memphis, eight years ago, prompted the House to look into the death of the civil-rights leader. Thisinitial informat ion, centering on former FBI agent Frank G. Holloman, was brought to light by Lef Payne, (continucd on page 6) JPK, King (continued from cover) a black journalist for Newsday. About a month ago Lane, working from the Holloman lead, went to Memphis to talk to four would-be witnesses to the King assassination- two black pólice officers and two black fire-fighters. The two pólice officers, members of the Memphis Pólice Department, were the only security assigned to protect King on his visit to that city. The head of the detail, Detective Sgt. Ed Redditt, was mysteriously relieved of duty by Memphis Pólice and Fire Director Frank Holloman at the request of the Secret Service, according to Newsworks, a weekly newspape published in Washington, D.C., and New Times magazine. Holloman is the former special agent in charge of the FBl's Atlanta office, the hometown o King for eight years, and once worked as the FBI inspector in charge of J. Edgar Hoover's per sonal office in Washington. Apparently a Secret Service agent out of Washington met with Redditt and Holloman to explain that they (the Secret Service) had learned an attempt was going to be made on Redditt's life. Redditt argued that such tal was nonsense. Relieved of his assignment, Redditt was escorted from poj' headquarters by Memphis polic jpven more protection than King himself, and left with no replacement on his original assignment. Redditt learned of King's assassination soon after his arrival at a local hotel where pólice officials had suggested Redditt would be "safe." The two black fire-fighters, based at the fire station across the alley from the motej where King was staying, were transferred to another post the night before the slaying, leaving the firehouse under-staffed. The firehouse was also Redditt's headquarters during King's stay in Memphis. The FBI has recently been charged by a team of west-coast investigators looking into the King case with attempting to sabotage the civil-rights ment by trying to destroy the credibility of its leaders. King was also singled out in a 1968 FBI memo as one of the current erop of black leaders who had "messianic" qualities and presented a danger to the established order in the United States. Of the seven Democrats (in addition to Downing) assigned to the 12-member select committee investigating the assassinations, four are members of the House Black Caucus who will concéntrate their efforts on the death of Dr. Ring. Walter Fauntroy (D-D.C), a Washington-based Southern Christian Leadership Conference activist at the time of King's murder, will direct their investigation. A final report is not expected before the end of the year.