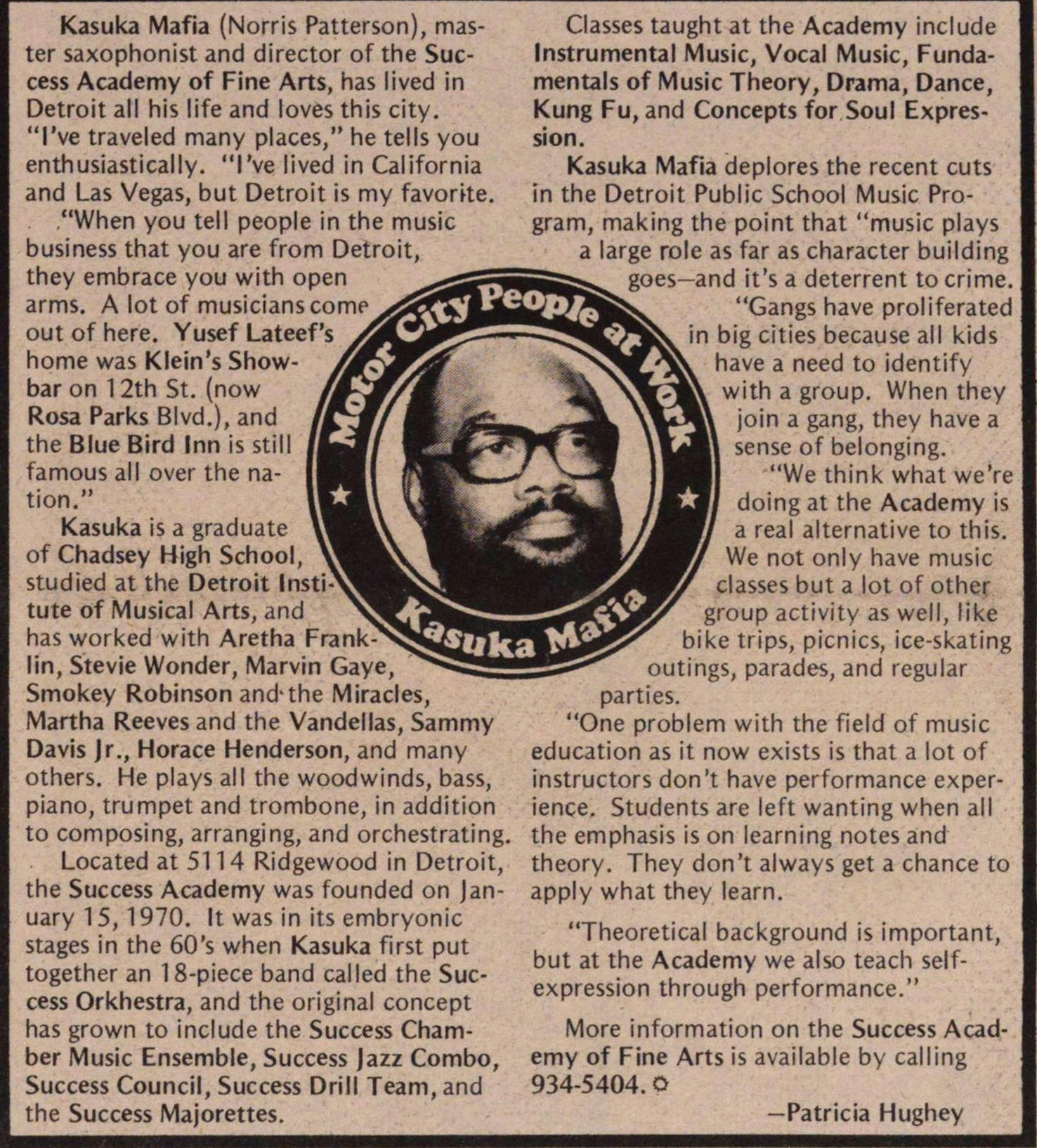 Kasuka Mafia (Norris Patterson), master saxophonist and director of the Success Academy of Fine Arts, has lived n Detroit all his life and loves this city. "l've traveled many places," he tel Is you enthusiastically. "l've lived in California and Las Vegas, but Detroit is my favorite. "When you teil people in the music business that you are from Detroit, thev embrace vou with onen - arms. A lot of musicianscome out of here. Yusef Lateef's ÁL home was Klein's Showbar on 12th St. (now Rosa Parks Blvd.),and the Blue Bird Inn s stil] j famous all over the nation." Kasuka is a gradúate h of Chadsey High School, studied at the Detroit Institute of Musical Arts, and has worked with Aretha Frank- lin, Stevie Wonder, Marvin Gave, Smokey Robinson the Miracles, Martha Reeves and the Vandellas, Sammy Davis Jr., Horace Henderson, and many others. He plays all the woodwinds, bass, piano, trumpet and trombone, in addition to composing, arranging, and orchestrating. Located at 51 1 4 Ridgewood in Detroit, the Success Academy was founded on January 15,1970. It was in ts embryonic stages in the 60's when Kasuka first put together an 18-piece band cal led the Success Orkhestra, and the original concept has grown to include the Success Chamber Music Ensemble, Success Jazz Combo, Success Council, Success Drill Team, and the Success Majorettes. Classes taught at the Academy nclude Instrumental Music, Vocal Music, Fundamentals of Music Theory, Drama, Dance, Kung Fu, and Concepts for Soul Expression. Kasuka Mafia deplores the recent cuts in the Detroit Public School Music Program, making the point that "music plays a large role as far as character building goes- and it s a deterrent to crime. v "Gangs have proliferated n big cities because all kids have a need to dentify i with a group. When they Ia join a gang, they have a li sense of belonging. "We think what we're [I doing at the Academy is a real alternative to this. We not only have music classes but a lot of other JBr group activity as well, like bike trips, picnics, ice-skating outings, parades, and regular parties. "One problem with the field of music education as t now exists s that a lot of nstructors don 't have performance experence. Students are left wanting when all the emphasis is on learning notes and theory. They don 't always get a chance to apply what they learn. "Theoretical background is important, but at the Academy we also teach selfexpression through performance." More nformation on the Success Academy of Fine Arts is available by calling 934-5404. 0