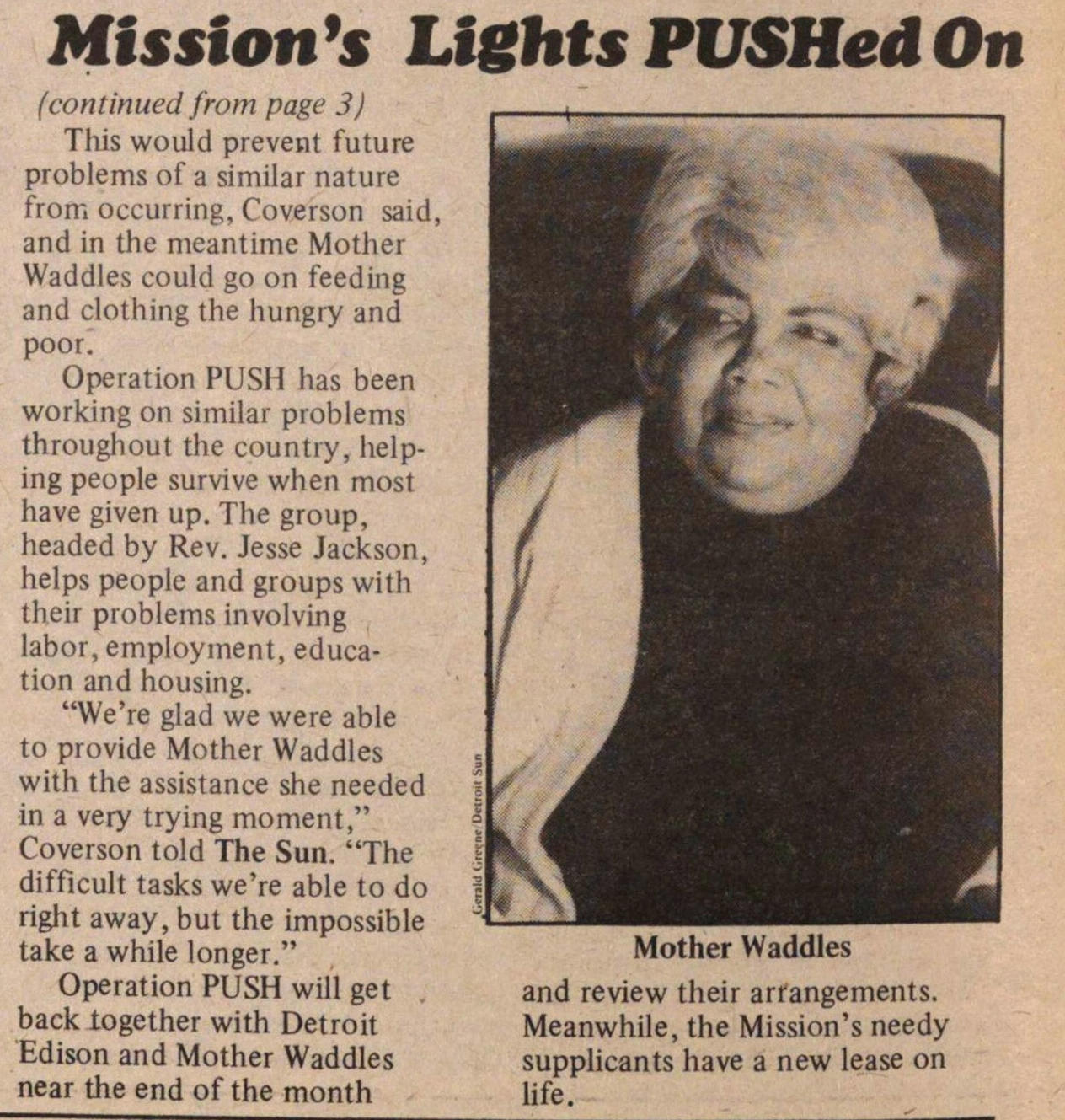 The lights are on again at Mother Waddles' Perpetual Mission, thanks to the efforts of Operation PUSH (People United To Save Humanity) and Mildred Gates, Rep. Don Riegle's senatorial campaign coordinator.

The Mission on Gratiot, which distributes free clothing and food to the needy, had been without light or power for several days after Detroit Edison cut off service for nonpayment of a $12,000 electricity bill, accumulated over the past year.

PUSH Director Bob Coverson was in Washington, D.C. conferring with Rep. Riegle on unrelated matters when a call came in from the senatorial candidate's Detroit office. Ms. Gates, alarmed that Mother Waddles' Mission had been plunged into darkness by the Edison decision, wanted to know what could be done to help.

When they got back to Detroit, Coverson and PUSH volunteer David Laster first huddled with Mother Waddles to ascertain the details of her problem, then met with Detroit Edison spokesperson Beatrice Banks- the lady who turns the switch on and off.

Coverson pleaded Mother Waddies' case, pointing out that she "works and succeeds against difficult odds, even in the light, but in the dark she is unable even to operate her kitchen."

Banks conceded that Mother Waddles "is doing a fine job" but insisted that "there is no way we could turn her service on, not even for a day, unless we get some money."

Coverson explained that there was no cash available, but that if Edison would restore lights and power to the Mission, Operation PUSH would accept responsibility for the Mission's indebtedness to Edison and would work with Mother Waddles over the next 30 days to establish proper accounting and business procedures throughout her operation. (continued on page 4)

This would prevent future problems of a similar nature from occurring, Coverson said, and in the meantime Mother Waddles could go on feeding and clothing the hungry and poor.

Operation PUSH has been working on similar problems throughout the country, helping people survive when most have given up.The group, headed by Rev. Jesse Jackson, helps people and groups with their problems involving labor, employment, education and housing.

"We're glad we were able to provide Mother Waddles with the assistance she needed in a very trying moment," Coverson told The Sun.

"The difficult tasks we're able to do right away, but the impossible take a while longer."

Operation PUSH will get back together with Detroit Edison and Mother Waddles near the end of the month and review their arrangements. Meanwhile, the Mission's needy supplicants have a new lease on life.