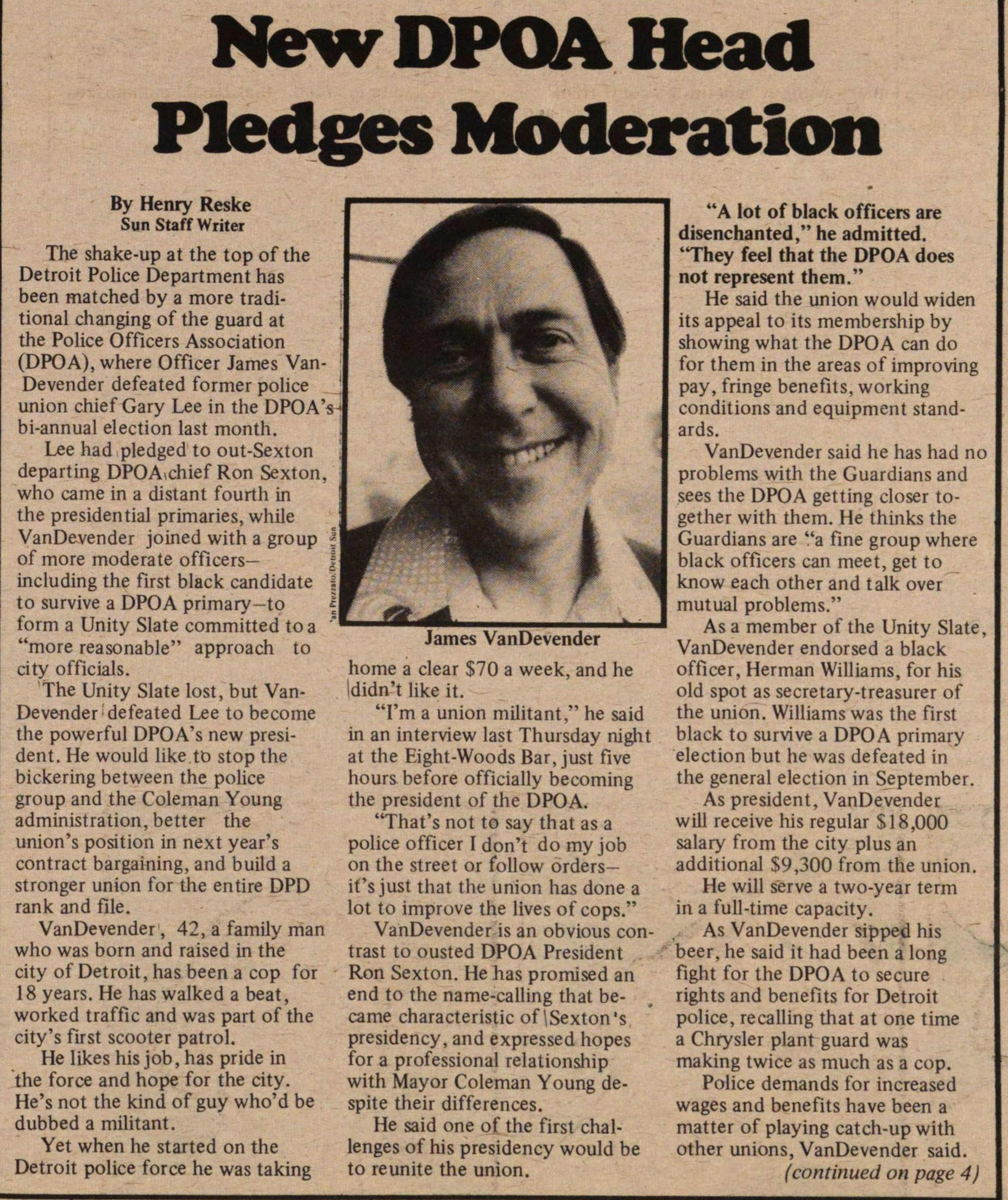 Sun Staff Writer The shake-up at the top of the Detroit Pólice Department has been matched by a more traditional changing of the guard at the Pólice Officers Association (DPOA), where Officer James VanDevender defeated former pólice unión chief Gary Lee in the DPOA's bi-annual election last month. Lee had pledged to out-Sexton departing DPOAichief Ron Sexton, who carne in a distant fourth in the presiden tial primaries, while VanDevender joined with a group of more moderate officers- including the first black candidate to survive a DPOA primary- to form a Unity Slate committed to a "more reasonable" approach to city officials. 'The Unity Slate lost, but VanDevender defeated Lee to become the powerful DPOA's new president. He would like tö stop the bickering between the pólice group and the Coleman Young administration.better the union's position in next year's contract bargaining, and build a stronger union for the en tire DPD rank and file. VanDevender , 42, a family man who was bom and raised in the city of Detroit, has been a cop for 18 years. He has walked a beat, worked traffic and was part of the city's first scooter patrol. He likes his job, has pride in the force and hope for the city. He's not the kind of guy who'd be dubbed a militant. Yet when he started on the Detroit pólice force he was taking home a clear $70 a week, and he Ididn't like it. "I'm a unión militant," he said in an interview last Thursday night at the Eight-Woods Bar, just five hours before officially becoming the president of the DPOA. 'That's not to say that as a pólice officer I don't do my job on the street or follow ordersif 's just that the unión has done a lot to improve the lives of cops." VanDevender is an obvious contrast to ousted DPOA President Ron Sexton. He has promised an end to the name-calling that became characteristic of ISexton's presidency, and expressed hopes for a professional relationship with Mayor Coleman Young despite their differences. He said one of the first challenges of his presidency would be to reunite the union. I "A lot of black officers are disenchanted," he admitted. "They feel that the DPOA does not represent them." He said the union would widen its appeal to its membership by showing what the DPOA can do for them in the areas of improving pay, fringe benefits, working conditions and equipment standards. VanDevender said he has had no problems with the Guardians and sees the DPOA getting closer together with them. He thinks the I Guardians are "a fine group where black officers can meet, get to know each other and talk over mutual problems." As a member of the Unity Slate, VanDevender endorsed a black officer, Herman Williams, for his old spot as secretary-treasurer of the union. Williams was the first black to survive a DPOA primary election but he was defeated in the general election in September. As president, VanDevender will receive his regular $18,000 salary from the city plus an additional $9,300 from the union. He will serve a two-year term in a full-time capacity. As VanDevender sipped his beer, he said it had been á long fight for the DPOA to secure rights and benefits for Detroit pólice, recalling that at one time a Chrysler plant guard was making twice as much as a cop. Pólice demands for increased wages and benefits have been a matter of playing catch-up with other unions, VanDevender said. (continued on page 4) New DPOA Head Pledges Moderation (continuad f rom page 3) Detroit pólice now have one of the bestpay and benefit packages in the country, but "there is always room for improvement," he said, citing proposals for better training programs and equipment as key demands in the 1977 negotiations. Another major point, according to the new DPOA president, will be the controversial rèsidericy requirement for Detroit pólice officers. VanDevender claims that the DPOA has the right to negotiate the residency requirement in every contract despite court defeats. He termed the residency require requirement "medieval," claiming that some cops need to leave the city just so they can stop being cops for a while and get away from the pressure." He said that other major cities, such as Washington, D.C., Los Angeles and New York, have 'tri-county residency requirements. VanDevender said, however, that a lot of the cops would probably stay in Detroit just because they couldn't afford the cost of housing outside the city. On the question of the recent shake-up in the pólice department's top command, VanDevender didn't see much of a problem for the cop on the street. "Chiefs come and go all the time," he said, "and it's not all that traumatic for the street copfor them the chief might as well be in the ionosphere." He said he knows both Chief William Hart and Executive Deputy Chief James Bannon and finds both men "honest, hardworking straight-shooters." He said ousted Chief Tannian didn't have the "proper background to be an adequate pólice administrator. He was an attorney and FBI man, not a cop." The one thing that does bother VanDevender is the recent drug probe into corruption in the pólice department. He said he fears that the probe may cause a political fallout for the cops on the beat.