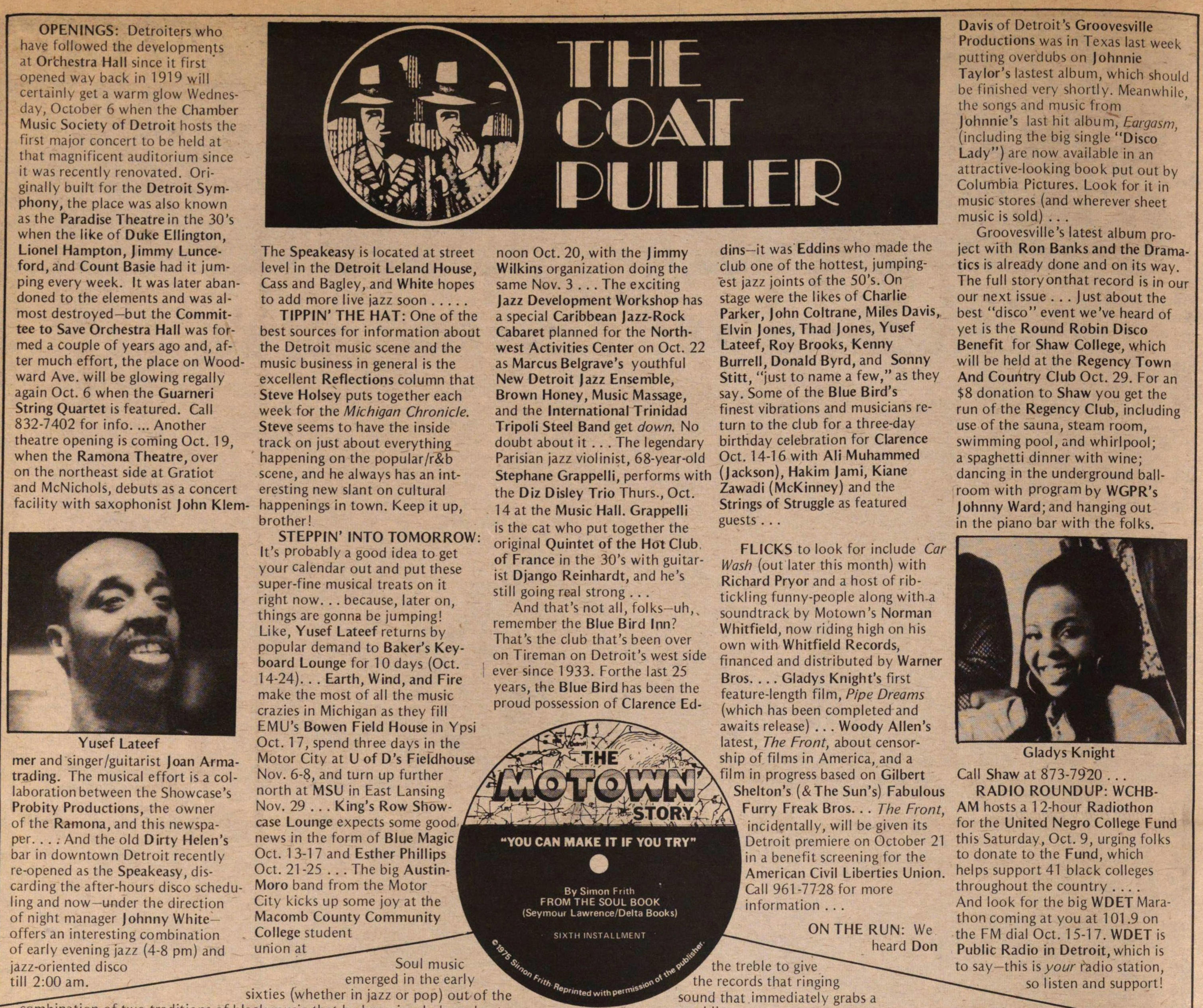 OPENINGS: Detroiters who have followed the developments at Orchestra Hall since it first opened way back in 1919 will certainly get a warm glow Wednesday, October 6 when the Chamber Music Society of Detroit hosts the first major concert to be held at that magnificent auditorium since it was recently renovated. Originally built for the Detroit Symphony, the place was also known as the Paradise Theatre in the 30's when the like of Duke Ellington, Lionel Hampton, Jimmy Lunceford, and Count Basie had it jumping every week. It was later abandoned to the elements and was almost destroyed- but the Committee to Save Orchestra Hall was formed a couple of years ago and, after much effort, the place on Woodward Ave. will be glowing regally again Oct. 6 when the Guarneri String Quartet is featured. Cali 832-7402 for info. ... Another theatre opening is coming Oct. 19, when the Ramona Theatre, over on the northeast side at Gratiot and McNichols, debuts as a concert facility with saxophonist John Klemer and singer/guitarist Joan Armatrading. The musical effort is a collaboration between the Showcase's Probity Productions, the owner of the Ramona, and this newspaper. . . . And the old Dirty Helen's bar in downtown Detroit recently re-opened as the Speakeasy, discarding the after-hours disco scheduling and now- under the direction of night manager Johnny White-offers an interesting combination of early evening jazz (4-8 pm) and jazz-oriented disco till 2:00 am.

The Speakeasy is located at street level in the Detroit Leland House, Cass and Bagley, and White hopes to add more live jazz soon.....

TIPPIN' THE HAT: One of the best sources for information about the Detroit music scene and the music business in general is the excellent Reflections column that Steve Holsey puts together each week for the Michigan Chronicle. Steve seems to have the inside track on just about everything happening on the popular/r&b scene, and he always has an interesting new slant on cultural happenings in town. Keep it up, brother!

STEPPIN' INTO TOMORROW: It's probably a good idea to get your calendar out and put these super-fine musical treats on it right now. . . because, later on, things are gonna be jumping! Like, Yusef Lateef returns by popular demand to Baker's Keyboard Lounge for 10 days (Oct. 14-24). . . Earth, Wind, and Fire make the most of all the music crazies in Michigan as they fill EMU's Bowen Field House in Ypsi Oct. 1 7, spend three days in the Motor City at U of D's Fieldhouse Nov. 6-8, and turn up further north at MSU in East Lansing Nov. 29 ... King's Row Showcase Lounge expects some good news in the form of Blue Magic Oct. 13-17 and Esther Phillips Oct. 21 -25...The big Austin-Moro band from the Motor City kicks up some joy at the Macomb County Community College student union at noon Oct. 20, with the Jimmy Wilkins organization doing the same Nov. 3...The exciting Jazz Development Workshop has a special Caribbean Jazz-Rock Cabaret planned for the Northwest Activities Center on Oct. 22 as Marcus Belgrave's youthful New Detroit Jazz Ensemble, Brown Honey, Music Massage, and the International Trinidad Tripoli Steel Band get down. No doubt about it . . . The legendary Parisian jazz violinist, 68-year-old Stephane Grappelli, performs with the Diz Disley Trio Thurs., Oct. 14 at the Music Hall. Grappelli is the cat who put together the original Quintet of the Hot Club. of France in the 30's with guitarist Django Reinhardt, and he's still going real strong . . .

And that's not all, folks-uh, remember the Blue Bird Inn? That's the club that's been over on Tireman on Detroit's west side ever since 1933. Forthe last 25 years, the Blue Bird has been the proud possession of Clarence Eddins- it was Eddins who made the club one of the hottest, jumpingest jazz joints of the 50's. On stage were the likes of Charlie Parker, John Coltrane, Miles Davis, Elvin Jones, Thad Jones, Yusef Lateef, Roy Brooks, Kenny Burrell, Donald Byrd, and Sonny Stitt, "just to name a few," as they say. Some of the Blue Bird's finest vibrations and musicians return to the club for a three-day birthday celebration for Clarence Oct. 14-16 with Ali Muhammed (Jackson), Hakim Jami, Kiane Zawadi (McKinney) and the Strings of Struggle as featured guests . . .

FLICKS to look for include Car Wash (out later this month) with Richard Pryor and a host of rib-tickling funny-people along with-a soundtrack by Motown's Norman Whitfield, now riding high on his own with Whitfield Records, financed and distributed by Warner Bros. . . . Gladys Knight's first feature-length film, Pipe Dreams (which has been completed and awaits release) . . . Woody Allen's latest, The Front, about censorship of films in America, and a film in progress based on Gilbert Shelton's (&The Sun's) Fabulous Furry Freak Bros. . . The Front, incidentally, will be given its Detroit premiere on October 21 in a benefit screening for the American Civil Liberties Union. I Cali 961-7728 for more ' information . . .

ON THE RUN: We heard Don Davis of Detroit 's Groovesville Productions was in Texas last week putting overdubs on Johnnie Taylor's lastest album, which should be finished very shortly. Meanwhile, the songs and music from Johnnie's last hit album, Eargasm, (including the big single "Disco Lady") are now available in an attractive-looking book put out by Columbia Pictures. Look for it in music stores (and wherever sheet music is sold) . . .

Groovesville's latest album project with Ron Banks and the Dramatics is already done and on its way. The full story onthat record is in our our next issue . . . Just about the best "disco" event we've heard of yet is the Round Robín Disco Benefit for Shaw College, which will be held at the Regency Town And Country Club Oct. 29. For an $8 donation to Shaw you get the run of the Regency Club, including use of the sauna, steam room, swimming pool, and whirlpool; a spaghetti dinner with wine; dancing in the underground balIroom with program by WGPR's Johnny Ward; and hanging out in the piano bar with the folks.

RADIO ROUNDUP: WCHBAM hosts a 12-hour Radiothon for the United Negro College Fund this Saturday, Oct. 9, urging folks to dnate to the Fund, which helps support 41 black colleges throughout the country .... And look for the big WDET Marathon coming at you at 101.9 on the FM dial Oct. 15-17. WDET is Public Radio in Detroit, which is to say- this is your radio station, so listen and support!