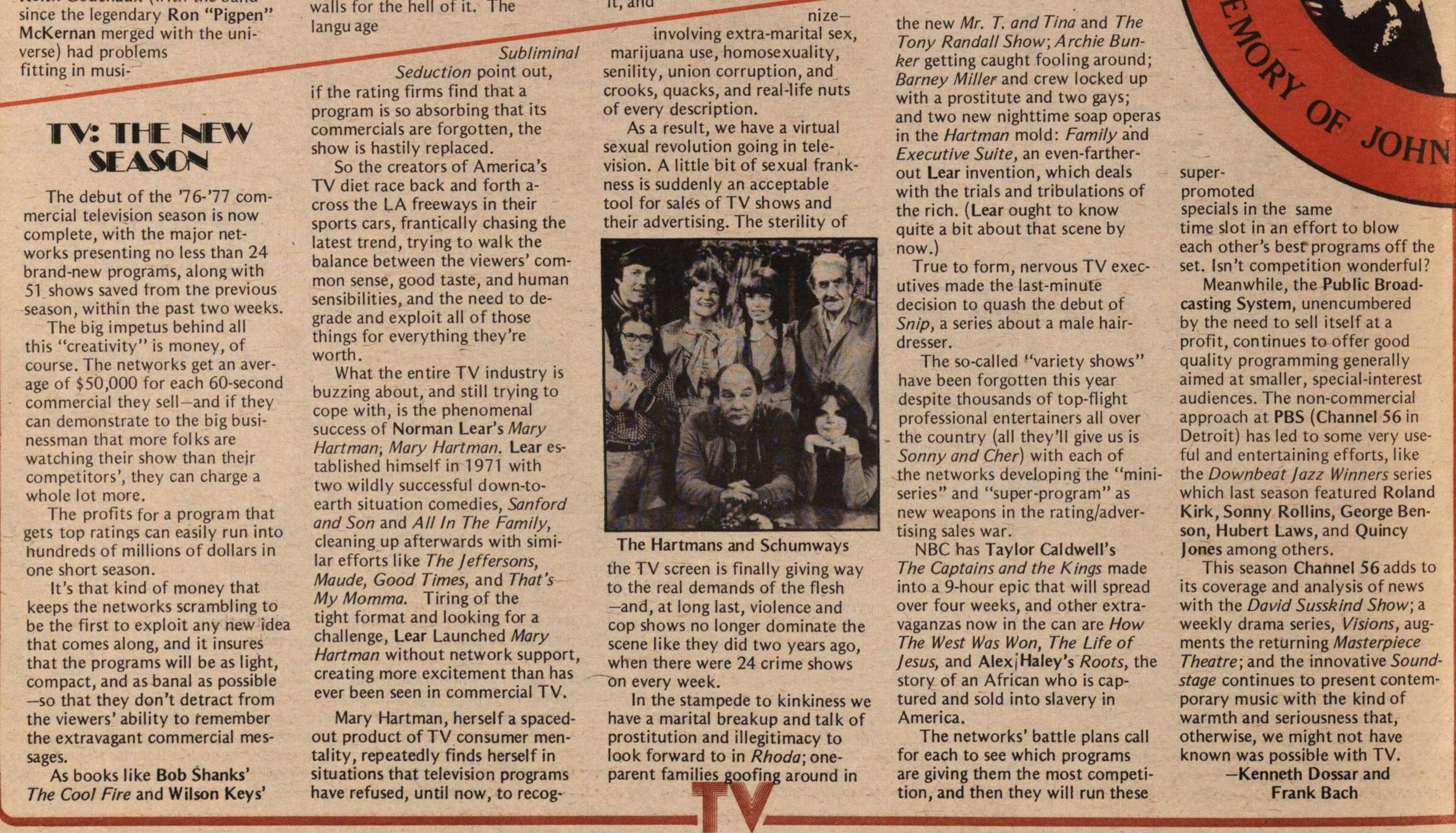 The debut of the '76-77 commercial televisión season is now complete, with the major networks presenting no less than 24 brand-new programs, along with 51 shows saved trom the previous season, within the past two weeks. The big Ímpetus behind all this "creativity" is money, of course. The networks get an average of $50,000 for each 60-second commercial they sell- and f they can demónstrate to the big businessman that more folks are watching their show than thejr competitors', they can charge a whole lot more. The profits for a program that gets top ratings can easily run into hundreds of millions of dollars in one short season. lt 's that kind of money that keeps the networks scrambling to be the first to exploit any new idea that comes along, and it nsures that the programs will be as light, compact, and as banal as possible -so that they don't detract from the viewers' ability to femember the extravagant commercial messages. As books like Bob Shanks' The Cool Fire and Wilson Keys' Subliminal Seduction point out, f the rating firms find that a program s so absorbing that ts commercials are forgotten, the show is hastily replaced. So the creators of America's TV diet race back and forth across the LA freeways in their sports cars, frantically chasing the latest trend, trying to walk the balance between the viewers1 common sense, good taste, and human sensibilities, and the need to degrade and exploit all of those things for everything they're worth. What the en tire TV industry is buzzing about, and still trying to cope with, is the phenomenal success of Norman Lear's Mary Hartman, Mary Hartman. Lear established himself in 1971 with two wildly successful down-toearth situation comedies, Sanford and Son and All In The Family, cleaning up afterwards with similar efforts like The Jeffersons, Maude, Good Times, and That's My Momma. Tiring of the tight format and looking for a challenge, Lear Launched Mary Hartman without network support, creating more excitement than has ever been seen in commercial TV. Mary Hartman, herself a spacedout product of TV consumer mentality, repeatedly finds herself n situations that televisión programs have refused, until now, to nize- nvolving extra-marital sex, marijuana use, homosexuality, senility, unión corruption, and crooks, quacks, and real-tife nuts of every description. As a result, we have a virtual sexual revolution going in televisión. A little bit of sexual frankness is suddenly an acceptable tooi for sales of TV shows and their advertising. The sterility of the TV screen is finally giving way to the real demands of the flesh -and, at long last, violence and cop shows no longer domínate the scène like they did two years ago, when there were 24 crime shows on every week. In the stampede to kinkiness we have a marital breakup and talk of prostitution and illegitimacy to look forward to in Rhoda; oneparent families eoofing around in the new Mr. T. and Tina and The Tony Randall Show;Archie Bunker getting caught fooling around; Barney Miller and crew locked up with a prostitute and two gays; and two new nighttime soap operas n the Hartman mold: Family and Executive Suite, an even-fartherout Lear invention, which deals with the trials and tribulations of the rich. (Lear ought to know quite a bit about that scène by now.) True to form, nervous TV executives made the last-minute decisión to quash the debut of Snip, a series about a male hairdresser. The so-called "variety shows" have been forgotten this year despite thousands of top-flight professional entertainers all over . the country (all they'll give us is Sonny and Cher) with each of the networks developing the "miniseries" and "su per-program" as new weapons in the ratingadvertising sales war. NBChasTaylorCaldwelPs The Captains and the Kings made into a 9-hour epic that will spread over four weeks, and other extravaganzas now in the can are How The West Was Won, The Life of Jesus, and AlexjHaley's Roots, the story of an African who is captured and sold into slavery in America. The networks1 battle plans cali for each to see which programs are giving them the most competition, and then they will run these V promoted specials n the same time slot in an effort to blow each other's best programs off the set. Isn't competition wonderful? Meanwhile, the Public Broadcasting System, unencumbered by the need to sell itself at a profit, continúes to offer good quality programming generally aimed at smaller, special-interest audiences. The non-commercial approach at PBS (Channel 56 in Detroit) has led to some very useful and entertaining efforts, like the Downbeat jazz Winners series which last season featured Roland Kirk, Sonny Rollins, George Benson, Hubert Laws.and Quincy Jones among others. This season Channel 56adds to ts coverage and analysis of news with the David Susskind Show; a weekly drama series, Visions, augments the returning Masterpiece Theatre;and the innovative Soundstage continúes to present contemporary music with the kind of warmth and seriousness that, otherwise, we might not have known was possible with TV. - -