New Stevie Wonder Senas In The Of Life 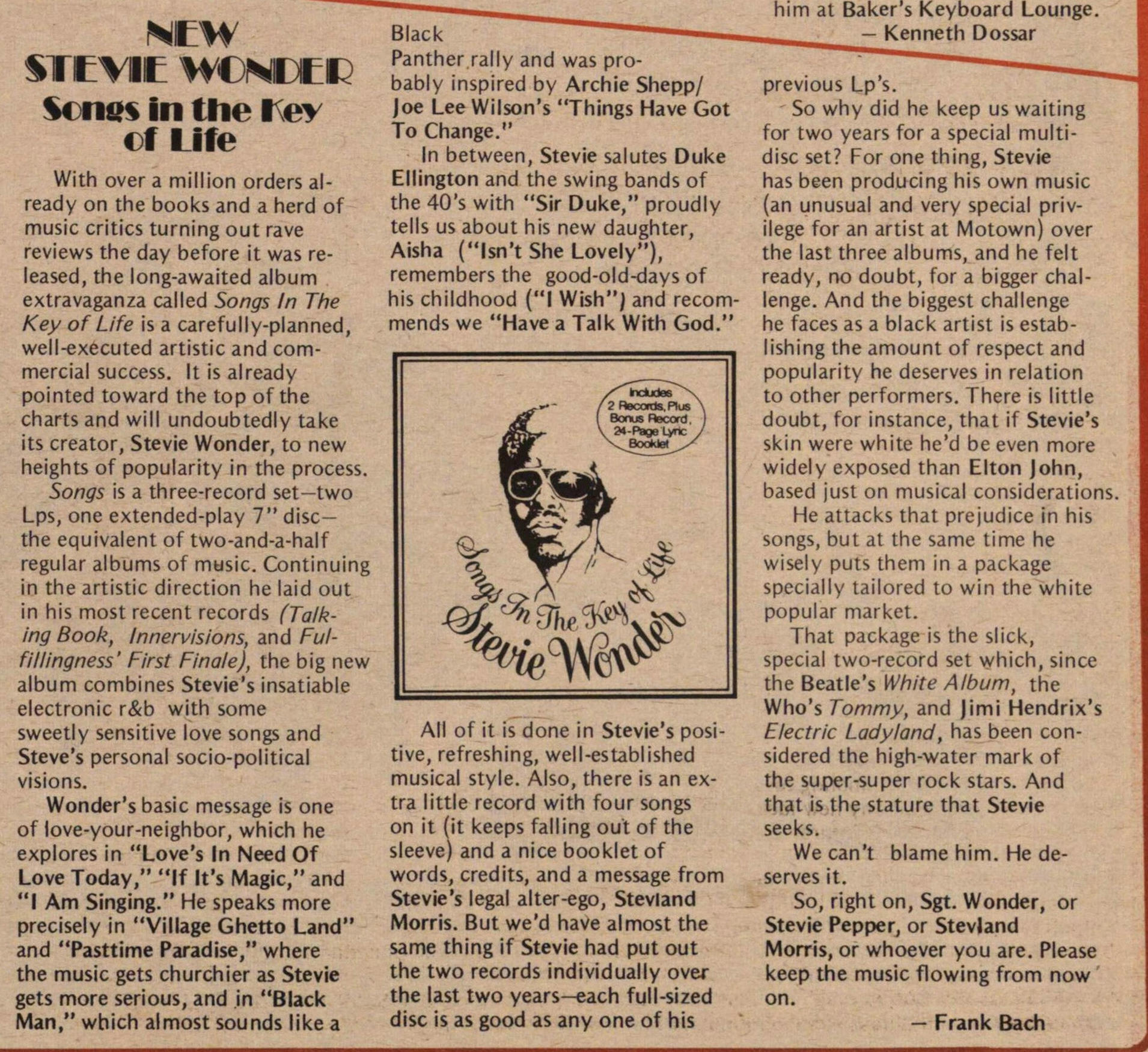 With over a mili on orders already on the books and a herd of music critics turning out rave reviews the day before it was released, the long-awaited album extravaganza called Songs In The Key of Life is a carefully-planned, well-executed artistic and commercial success. It is already pointed toward the top of the chartsand will undoubtedly take its creator, Stevie Wonder, to new heights of popularity in the process. Songs is a three-record set- two Lps, one extended-play 7" disc- the equivalent of two-and-a-half regular albums of music. Continuing in the artistic direction he laid out in his most recent records (Talking Book, Innervisions, and Fulfillingness' First Finale), the big new album combines Stevie's nsatiable electronic r&b with some sweetly sensitive love songs and Steve's personal socio-political visions. Wonder's basic message is one of love-your-neighbor, which he explores in "Love's In Need Of Love Today," "If It's Magie," and "I Am Singing." He speaks more precisely in "Village Ghetto Land" and "Pasttime Paradise," where the music gets churchier as Stevie gets more serious, and n "Black Man," which al most sounds like a Black " - Panther rally and was probably nspired by Archie Shepp Joe Lee Wilson's "Things Have Got To Change." In between, Stevie salutes Duke Ellington and the swing bands of the 40's with "Sir Duke," proudly tells us about nis new daughter, Aisha ("Isn't She Lovely"), remembers the good-old-days of his childhood ("I Wish") and recommends we "Have a Talk With God." All of t s done in Stevie's positive, refreshing, well-established musical style. Also, there is an extra little record with four songs on it (it keeps falling out of the sleeve) and a nice booklet of words, credits, and a message from Stevie's legal alter -ego, Stevland Morris. But we'd have al most the same thing if Stevie had put out the two records individually over the last two years- each full-sized disc is as good as any one of nis previous Lp s. So why did he keep us waiting for two years for a special multidisc set? For one thing, Stevie has been producing nis own music (an unusual and very special privilege for an artist at Motown) over the last three albums, and he feit ready, no doubt, for a bigger challenge. And the biggest challenge he faces as a black artist is establishing the amount of respect and popularity he deserves in relation to other performers. There is little doubt, for instance, that if Stevie's skin were white he'd be even more widely exposed than Elton John, based just on musical considerations. He attacks that prejudice n his songs, but at the same time he wisely puts them n a package specially tailored to win the white popular market. That package is the slick, special two-record set which, since the Beatle's White Album, the Who's Tommy, and )imi Hendrix's Electric Ladyland, has been considered the high-water mark of the su per-su per rock stars. And that is the stature that Stevie seeks. We can 't blame him. He deserves t. So, right on, Sgt. Wonder, or Stevie Pepper, or Stevland Morris, or whoever you are. Please keep the music flowing from now on.