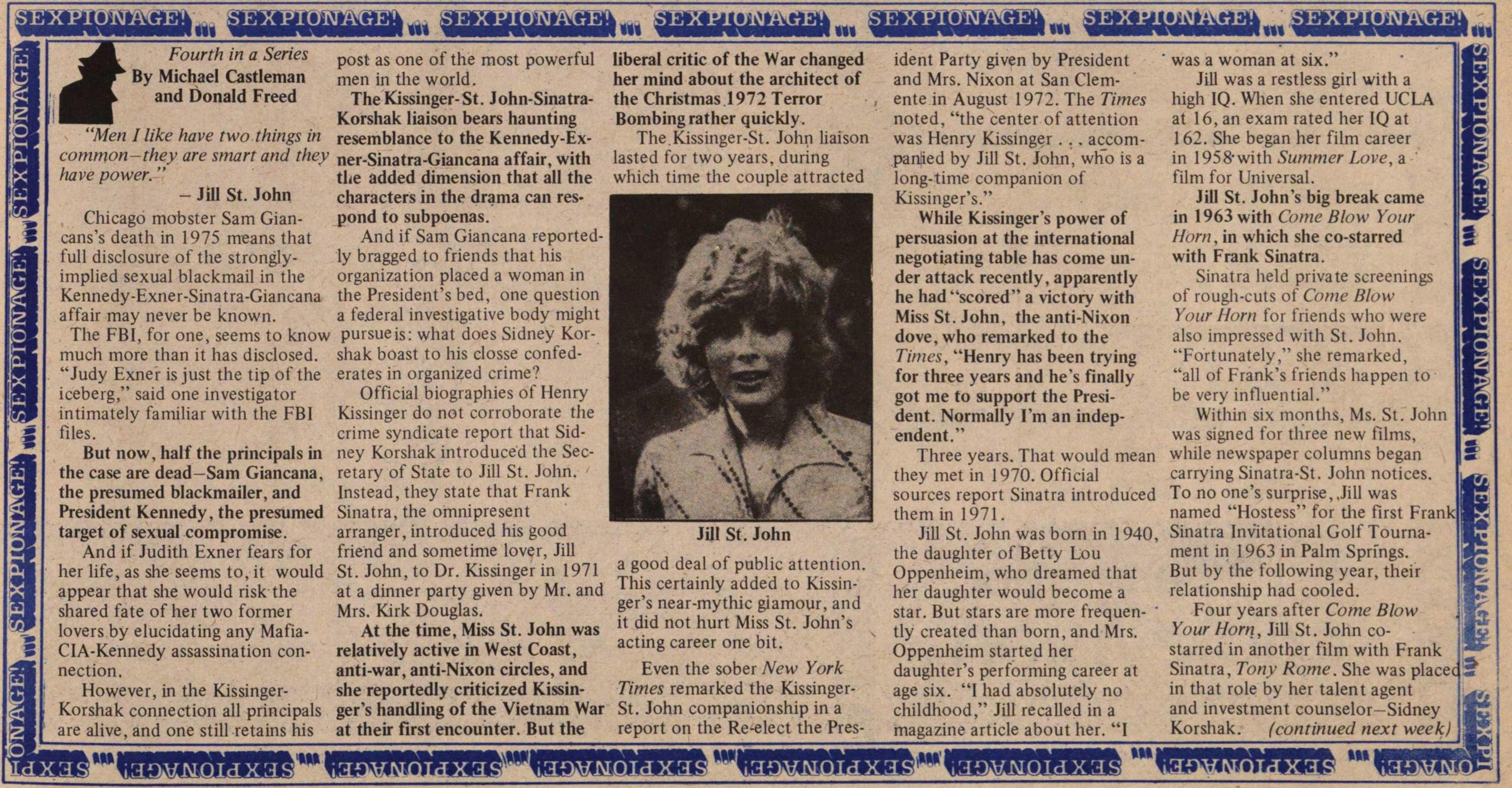 Fourth in a Series "Men J like have two things in common-they are smart and they have power. " - Jill St. John Chicago mobster Sam Giancans's death in 1975 means that full disclosure of tiie stronglyimplied sexual blackmail in the Kennedy-Exner-Sinatra-Giancana affair may never be known. The FBI, for one, seems to know much more than it has disclosed. "Judy Exner is just the tip of the iceberg," said one investigator intimately familiar with the FBI files. But ii o . half the principáis in the case are dead- Sam Giancana, the presumed blackmailer, and President Kennedy, the presumed target of sexual compromise. And if Judith Exner fears for her life, as she seems to,it would appear that she would risk the shared fate of her two former lovers by elucidating any MafiaCIA-Kennedy assassination connection. However, in the KissingerKorshak connection all principáis are alive, and one still retains his post as one of the most powerful men in the world. The St. John-SinatraKorshak liaison bears haunting resemblance to the Kennedy-Exner-Sinatra-Giancana affair, with the added dimensión that all the diameters in the drama can respond to subpoenas. And if Sam Giancana Feportedly bragged to friends that his organization placed a woman in the President's bed, one question a federal investigative body might pursueis: what does Sidney Korshak boast to his closse confederates in organized crime? Official biographies of Henry Kissinger do not corrobórate the crime syndicate report that Sidney Korshak introduced the Secretary of State to Jill St. John. Instead, they state that Frank Sinatra, the omnipresent arranger, introduced his good friend and sometime lover, Jill St. John, to Dr. Kissinger in 1971 at a dinner party given by Mr. and Mrs. Kirk Douglas. At the time, Miss St. John was relatively active in West Coast, anti-war, anti-Nixon circles, and she reportedly criticized Kissinger 's handling of the Vietnam War at their first encounter. But the liberal crític of the War changed her mind about the architect of the Christmas 1972 Terror Bombing rather quickly. The.Kissinger-St. John liaison lasted for two years, during which time the couple attracted a good deal of public attention. This certainly added to Kissinger's near-mythic giamour, and it did not hurt Miss St. John's acting career one bit. Even the sober New York Times remarked the KissingerSt. John companionship in a report on the Re-elect the ident Party given by President and Mrs. Nixon at San Clemente in August 1972. The Times noted, "the center of attention was Henry Kissinger . . . accompanied by Jill St. John, wKb is a long-time companion of Kissinger's." While Kissinger's power of persuasión at the international negotiating table has come UBder attack recently, apparently he had "scored" a victory with Miss St. John, the anti-Nixon dove, who reinar koel to the Times, "Henry has been trying for three years and he's finally got me to support the President. Normally I'm an independent." Three years. That would mean they met in 1970. Official sources report Sinatra introduced them in 1971. Jill St. John was born in 1940, the daughter of Betty Lou Oppenheim, who dreamed that her daughter would become a star. But stars are more " tly created than born, and Mrs. Oppenheim started her daughter's performing career at age six. "I had absolutely no childhood," Jill recalled in a magazine article about her. "I ■ was a woman at six." Jill was a restless girl with a high IQ. When she entered UCLA at 16, an exam rated her IQ at 1 62. She began her film career in 1958"with Slimmer Love, a film for Universal. Jill St. John's big break came in 1963 with Come Blow Your Hom, in which she co-starred with Frank Sinatra. Sinatra held private screenings of rougli-cuts of Come Blow Your Hom for friends who were also impressed with St. John. "Fortunately," she remarked, "all of Frank's friends happen to be very influential." Within six months, Ms. St. John was signed for three new films, while newspaper columns began carrying Sinatra-St. John notices. To no one's surprise,, Jill was named "Hostess" for the first Frank] Sinatra Invitational Golf Tournament in 1963 in Palm Sprfngs. But by the following year, their relationship had cooled. Four years after Come Blow J Your Hom, Jill St. John costarred in another film with Frank Sinatra, Tony Rome . She was placee in that role by her talent agent and nvestment counselor- Sidney Korshak. (continued next week) 3 c i: l s I c S I I P p' m - _ h b fc k h h ft ft A ftl kk H al_