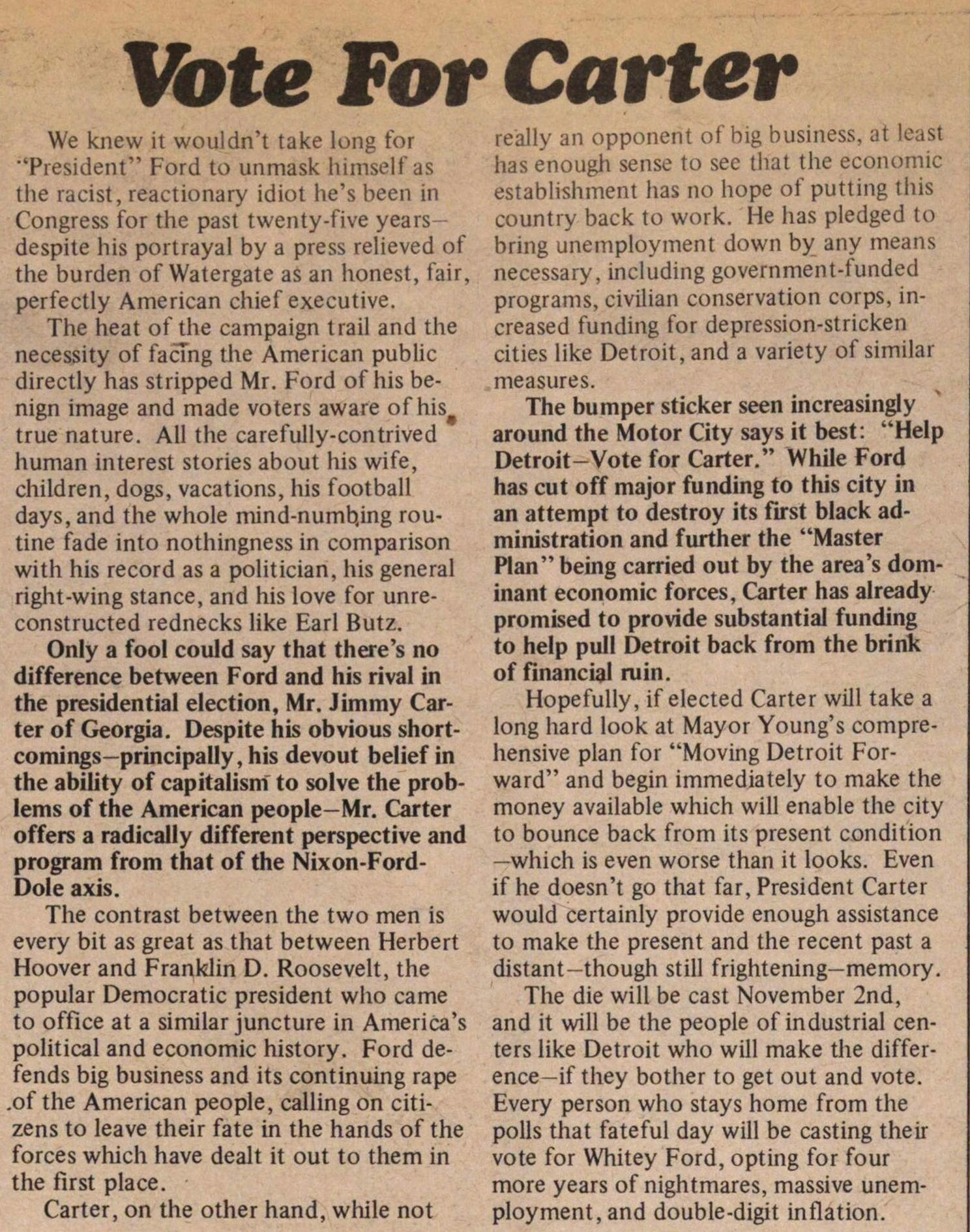 We knew it wouldn't take long for ■'President" Ford to unmask himself as the racist, reactionary idiot he's been in Congress for the past twenty-five yearsdespite his portrayal by a press relieved of the burden of Watergate as an honest, fair, perfectly American chief executive. The heat of the campaign trail and the necessity of facing the American public directly has stripped Mr. Ford of his benign image and made voters aware of his# true nature. All the carefully-contrived human interest stories about his wife, children, dogs, vacations, his football days, and the whole mind-numb.ing routine fade into nothingness in comparison with his record as a politician, his general right-wing stance, and his love for unreconstructed rednecks like Earl Butz. Only a fooi could say that there's no difference between Ford and his rival in the presidential election, Mr. Jimmy Carter of Georgia. Despite his obvious shortcomings- principally, his devout belief in the ability of capitalisni to sol vc the problems of the American people- Mr. Carter offers a radically different perspective and program from that of the Nixon-FordDole axis. The contrast between the two men is every bit as great as that between Herbert Hoover and Franklin D. Roosevelt, the popular Democratie president who came to office at a similar juncture in America's political and economie history. Ford defends big business and its continuing rape .of the American people, calling on citizens to leave their fate in the hands of the forces which have dealt it out to them in the first place. Carter, on the other hand, while not reálly an opponent of big business, at least has enough sense to see that the economie establishment has no hope of putting tliis country back to work. He has pledged to bring unemployment down by any means necessary, including government-funded programs, civilian conservation corps, increased funding for depression-stricken cities like Detroit, and a variety of similar measures. The bumper sticker seen increasingly around the Motor City says it best: "Help Vote for Carter." While Ford has cut off major funding to this city in an attempt to destroy its first black administ ration and further the "Master Plan" being carried out by the area's dominant economie forces, Carter has already promised to provide substantial funding to help pull Detroit back from the brink of financial ruin. Hopefully, if elected Carter will take a long hard look at Mayor Young's comprehensive plan for "Moving Detroit Forward" and begin immediately to make the money available which will enable the city to bounce back from its present condition -which is even worse than it looks. Even if he doesn't go that far, President Carter would certainly provide enough assistance to make the present and the recent past a distant-though still frightening- memory. The die will be cast November 2nd, and it will be the people of industrial centers like Detroit who will make the difference-if they bother to get out and vote. Every person who stays home from the polls that fateful day will be casting their vote for Whitey Ford, opting for four more years of nightmares, massive unemployment, and double-digit inflation.