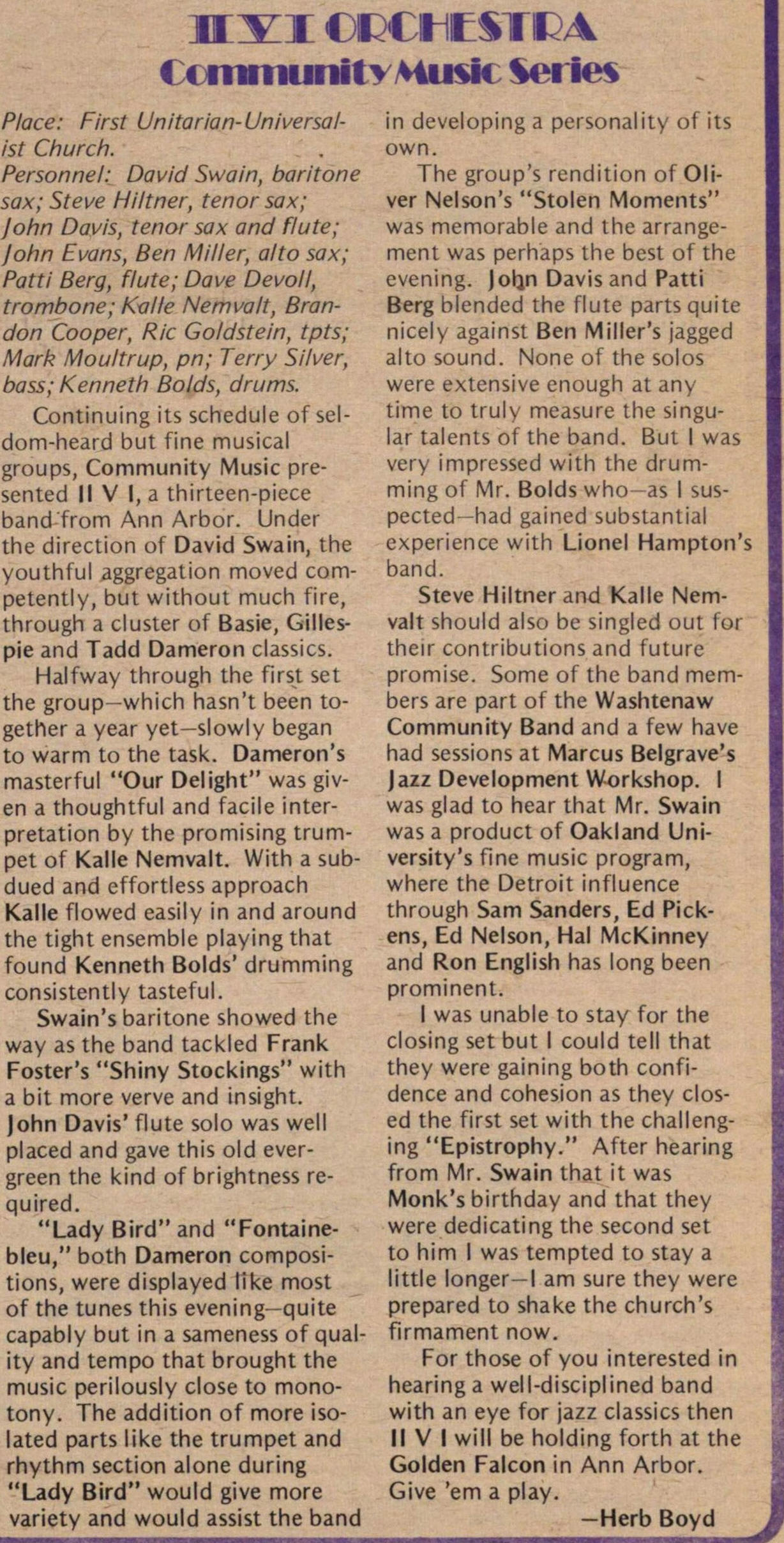 Place: First Unitarian-Universalist Church. Personnel: David Swain, bariton e sax; Steve Hiltner, tenor sax; John Davis, tenor sax and flute; John Evans, Ben Miller, alto sax; Patti Berg, flute; Dave Devoll, trombone; Kalle Ne m valt, Brandon Cooper, Ric Goldstein, tpts; Mark Moultrup, pn; Terry Siver, bass; Kenneth Botds, drums. Continuing its schedule of seldom-heard but fine musical groups, Community Music presented II V I, a thirteen-piece band from Ann Arbor. Under the direction of David Swain, the youthful aggregation moved competently, but without much fire, through a cluster of Basie, Gillespie and Tadd Dameron classics. Halfway through the first set the group- which hasn't been together a year yet-slowly began to warm to the task. Dameron's masterful "Our Delight" was given a thoughtful and facile interpretation by the promising trumpet of Kalle Nemvalt. With a subdued and effortless approach Kalle flowed easily n and around the tight ensemble playing that found Kenneth Bolds' drumming consistently tasteful. Swain'sbaritone showed the way as the band tackled Frank Foster's "Shiny Stockings" with a bit more verve and insight. John Davis' flute solo was well placed and gave this old evergreen the kind of brightness required. "Lady Bird"and "Fontainebleu," both Dameron compositions, were displayed like most of the tunes this evening- quite capably but in a sameness of quality and tempo that brought the music perilously close to monotony. The addition of more isolated parts like the trumpet and rhythm section alone during "Lady Bird" would give more variety and would assist the band n developing a personality of ts own. The group's rendition of Oliver Nelson's "Stolen Moments" was memorable and the arrangement was perhaps the best of the evening. Johi Davis and Patti Berg blended the flute parts quite nicely against Ben Miller's jagged alto sound. None of the solos were extensive enough at any time to truly measure the singular talents of the band. But I was very impressed with the drumming of Mr. Bolds who- as I suspected- had gained substantial experience with Lionel Hampton's band. Steve Hiltnerand Kalle Nemvalt should also be singled out for their contributions and future promise. Some of the band members are part of the Washtenaw Community Band and a few have had sessions at Marcus Belgrave's Jazz Development Workshop. I was glad to hear that Mr. Swain was a product of Oakland University's fine music program, where the Detroit influence through Sam Sanders, Ed Pickens, Ed Nelson, Hal McKinney and Ron English has long been prominent. I was unable to stay for the closing set but I could teil that they were gaining both confidence and cohesión as they closed the first set with the challenging "Epistrophy." After hearing from Mr. Swain that it was Monk'sbirthday and that they were dedicating the second set to him I was tempted to stay a little longer- I am sure they were prepared to shake the church's firmament now. For those of you nterested in hearing a well-disciplined band with an eye for jazz classics then II V I will be holding forth at the Golden Falcon in Ann Arbor. Give 'em a play.