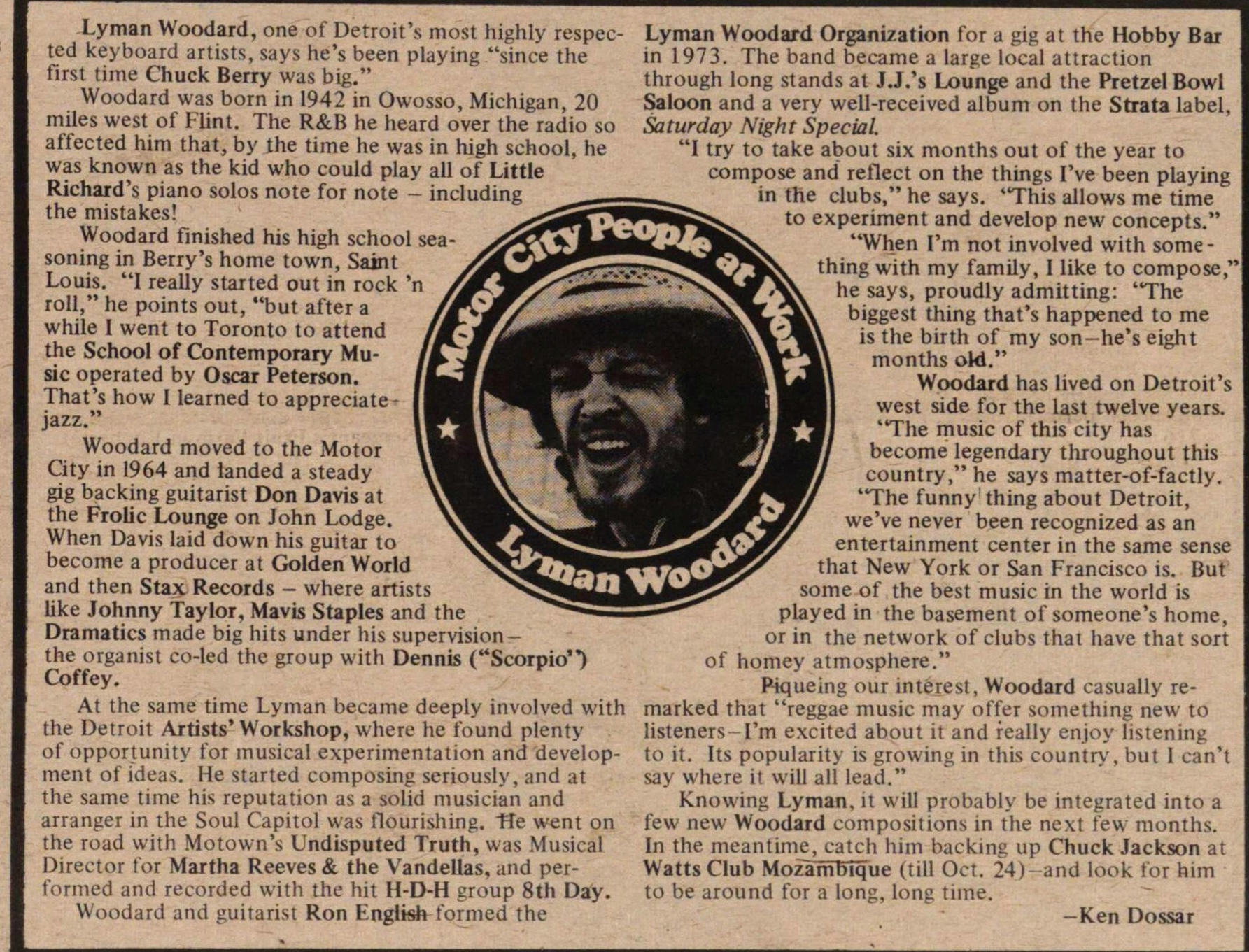 Lyman Woodard, one of Detroit's most highly respected keyboard artists, says he's been playing "since the firsl time Chuck Berry was big." Woodard was bom in 1942 in Owosso, Michigan, 20 miles west of Hint. The R&B he heard over the radio so affected him that, by the time he was in high school, he was known as the kid who could play all of Little Richard's piano solos note for note - including the mistakes! Woodard finished his high school soning in Berry's home town, Saint Louis. "I really started out in rock 'n roll," he points out, "but after a while I went to Toronto to attend the School of Contemporary fi sic operated by Oscar Peterson. Il That's how I learned to II jazz." Woodard moved to the Motor 1É City in 1964 and ianded a steady VH gig backing guitarist Don Davis at vH the Frolic Lounge on John Lodge. vj When Davis laid down his guitai to become a producer at Golden World and then Stax Records - where artists like Johnny Taylor, Mavis Staples and the Dramatics made big hits under his supervisión - the organist co-led the group with Dennis ("Scorpio") Coffey. At the same time Lyman beeame deeply involved with the Detroit Artists' Workshop, where he found plenty of opportunity for musical experimentation and development of ideas. He started composing seriously , and at the same time his reputation as a solid musician and arranper in the Soul Capitol was flourishing. "He went on the road with Motown's Undisputed Truth, was Musical Director lor Martha Reeves & the Vandellas. and pertbrmed and recorded with the hit H-D-H group 8th Day. Woodard and guitarist Ron l-'nglish formed the Lyman Woodard Organization for a gig at the Hobby Bar in 1973. The band became a large local attraction through long stands at JJ.'s Lounge and the Pretzel Bowl Saloon and a very well-received album on the Strata label, Saturday Ntght Special. "I try to take about six months out of the year to compose and rellect on the things I've been playing in the clubs," he says. "This allows me time fi to experiment and develop new concepts." When l'm not involved with somehing with my family, I like to compose," he says, proudly admitting: 'The biggest thing that's happened to me is the birth of my son-he's eight V months oW." Il Woodard has lived on Detroit's west side for the last twelve years. l "The music of this city has become legendary tluoughout this ' country," he says matter-of-factly. "The funny thing about Detroit, we've never been recognized as an entertainment center in the same sense ipf that New York or San Francisco is. But ' some of the best music in the world is played in the basement of someone's home, or in the network of clubs that have that sort of homey atmosphere." Piqueing our interest, Woodard casually remarked that "reggae music may offer something new to listeners-I'm excited about it and really enjoy Bstening to it. lts popularity is growing in this country, but I can't say where it wiU all lead." Knowing Lyman, it will probably be integrated into a few new Woodard composiüons in the ncxt few months. In the meanfime, catch liim backing up Chuck Jackson at Watts Club MozaTSBique (till Oct. 24) and look tor taim to be around for a long, long time.