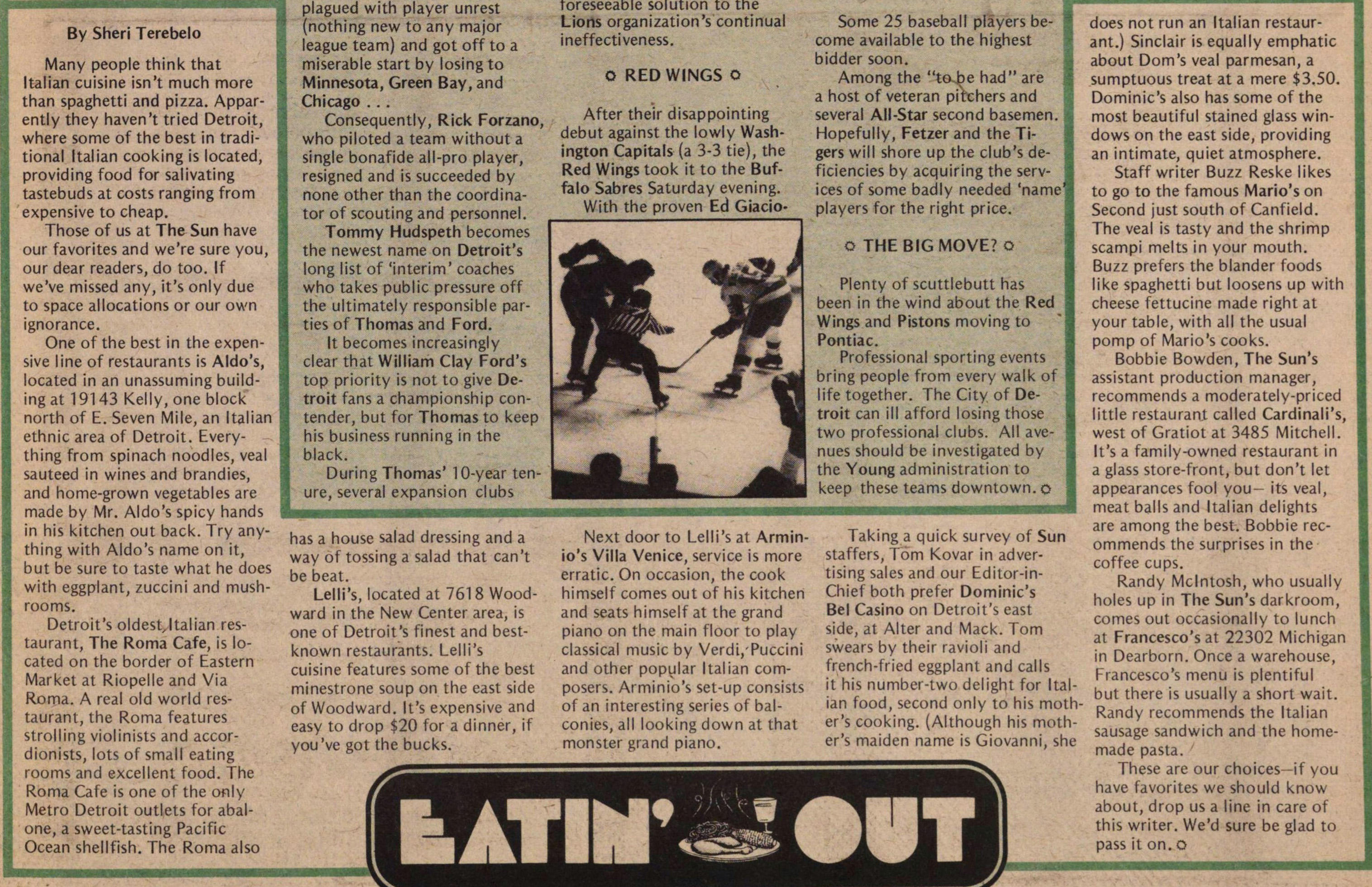 Many people think that Italian cuisine isn't much more than spaghetti and pizza. Apparently they haven 't tried Detroit, where some of the best in traditional Italian cooking is located, providing food for salivating tastebuds at costs ranging from expensive to cheap. Those of us at The Sun have our favorites and we're sure you, our dear readers, do too. If we've missed any, it's only due to space allocations or our own ignorance. One of the best n the expensive line of restaurants is Aldo's, located in an unassuming building at 19143 Kelly, oneblock north of E. Seven Mile, an Italian ethnic area of Detroit. Everything from spinach noodles, veal sauteed in winesand brandies, and home-grown vegetables are made by Mr. Aldo's spicy hands n his kitchen out back. Try anything with Aldo's name on it, but be sure to taste what he does with eggplant, zuccini and mushrooms. Detroit's oldestjtalian restaurant, The Roma Cafe, s located on the border of Eastern Market at Riopelle and Via Roma. A real oíd world restaurant, the Roma features strolling violinists and accordionists, lots of small eating rooms and excellent food. The Roma Cafe is one of the only Metro Detroit outlets for abalone, a sweet-tasting Pacific Ocean shellfish. The Roma also has a house salad dressing and a way of tossing a salad that can't be beat. Lelli's, located at 7618 Woodward n the New Center área, s one of Detroit's finest and bestknown restaurants. Lelli's cuisine features some of the best minestrone soup on the east side of Woodward. It's expensive and easy to drop $20 for a dinner, f you've got the bucks. Next door to Lelli's at Armino's Villa Venice, service is more erratic. On occasion, the cook himself comes out of his kitchen and seats himself at the grand piano on the main floor to play classical music by VerdiPuccini and other popylar Italian composers. Arminio's set-up consists of an nteresting series of balconies, all looking down at that monster grand piano. Taking a quick survey of Sun staffers, Tóm Kovar n advertising sales and our Editor-inChief both prefer Dominic's Bel Casino on Detroit's east side, at Alter and Mack. Torn swears by their ravioli and french-fried eggplant and calis t nis number-two delight for Italian food, second only to his mother's cooking. (Although his mother's maiden name is Giovanni, she does not run an Italian restaurant.) Sinclair is equally emphatic about Dom's veal parmesan, a sumptuous treat at a mere $3.50. Dominic's also has some of the most beautiful stained glass windows on the east side, providing an intímate, quiet atmosphere. Staff writer Buzz Reske likes to go to the famous Mario's on Second just south of Canfield. The veal is tasty and the shrimp scampi melts in your mouth. Buzz prefers the blander foods like spaghetti but loosens up with cheese fettucine made right at your table, with all the usual pomp of Mario's cooks. Bobbie Bowden, The Sun's assistant production manager, recommends a moderately-priced little restaurant called Cardinali's, west of Gratiot at 3485 Mitchell. It's a family-owned restaurant in a glass store-front, but don't let appearances fooi its veal, meat balts and Italian delights are among the best. Bobbie recommends the surprises in the coffee cups. Randy Mclntosh, who usually holes up in The Sun's darkroom, comes out occasionally to lunch at Francesco's at 22302 Michigan n Dearborn. Once a warehouse, Francesco's menu is plentiful but there is usually a short wait. Randy recommends the Italian sausage sandwich and the homemade pasta. These are our choices- if you have favorites we should know about, drop us a line in care of this writer. We'd sure be glad to pass t on. o