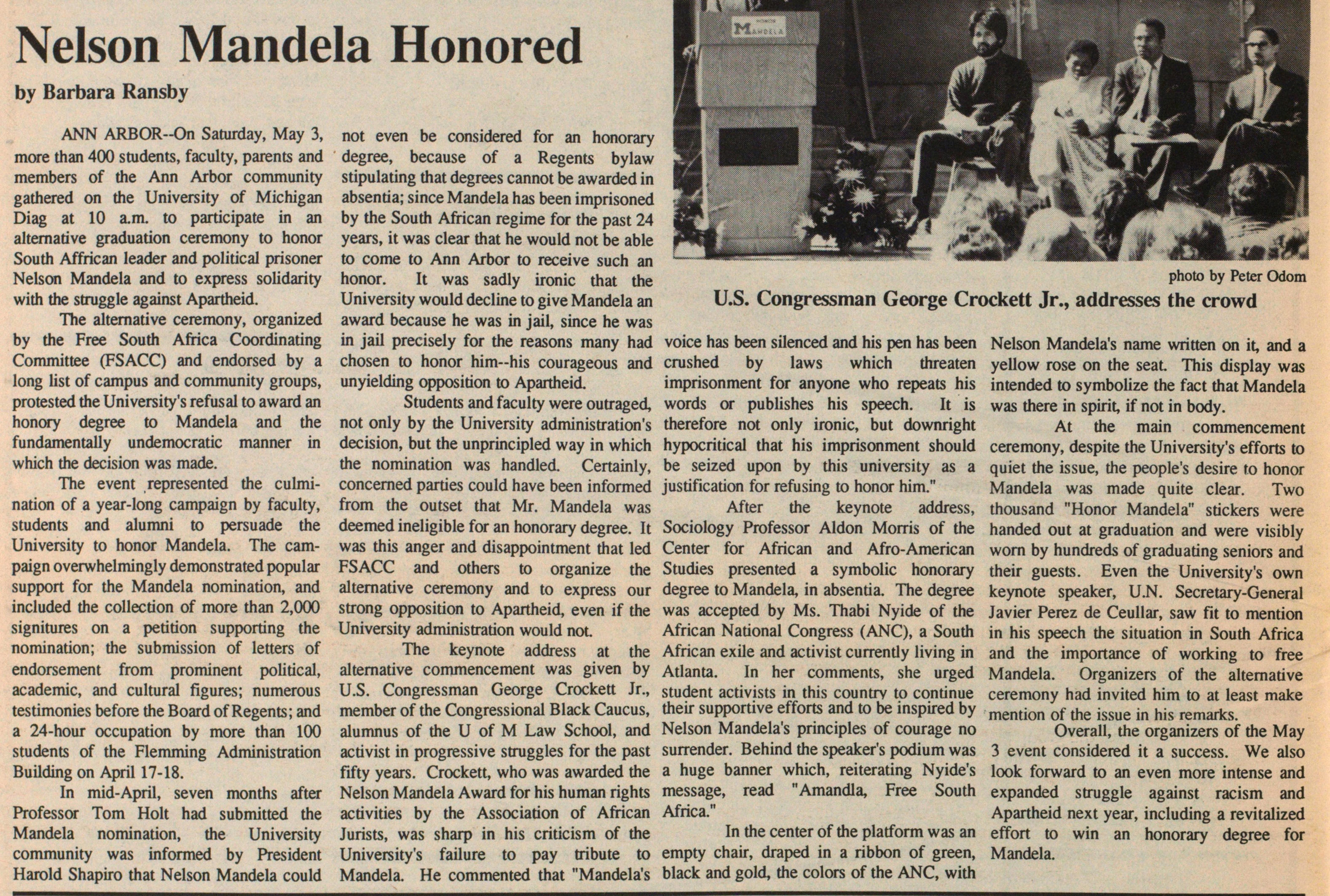 ANN ARBOR--On Saturday, May 3, more than 400 students, faculty, parents and members of the Ann Arbor community gathered on the University of Michigan Diag at 10 a.m. to participate in an alternative graduation ceremony to honor South Affrican leader and political prisoner Nelson Mándela and to express solidarity with the struggle against Apartheid. The altemative ceremony, organized by the Free South África Coordinating Committee (FSACC) and endorsed by a long list of campus and community groups, protested the University's refusal to award an honory degree to Mándela and the fundamentally undemocratic manner in which the decisión was made. The event represented the culmination of a year-long campaign by faculty, students and alumni to persuade the University to honor Mándela. The campaign ovenvhelmingly demonstrated popular support for the Mándela nomination, and included the collection of more than 2,000 signitures on a petition supporting the nomination; the submission of letters of endorsement from prominent political, academie, and cultural figures; numerous testimonies before the Board of Regents; and a 24-hour occupation by more than 100 students of the Flemming Administration Building on April 17-18. In mid-April, seven months after Professor Torn Holt had submitted the Mándela nomination, the University community was informed by President Harold Shapiro that Nelson Mándela could not even be considered for an honorary degree, because of a Regents bylaw stipulating that degrees cannot be awarded in absentia; since Mándela has been imprisoned by the South African regime for the past 24 years, it was clear that he would not be able to come to Ann Arbor to receive such an honor. It was sadly ironie that the University would decline to give Mándela an award because he was in jail, since he was in jail precisely for the reasons many had chosen to honor him-his courageous and unyielding opposition to Apartheid Students and faculty were outraged, not only by the University administration's decisión, but the unprincipled way in which the nomination was handled. Certainly, concerned parties could have been informed from the outset that Mr. Mándela was deemed ineligible for an honorary degree. It was this anger and disappointment that led FSACC and others to organize the alternative ceremony and to express our strong opposition to Apartheid, even if the University administration would not. The keynote address at the alternative commencement was given by U.S. Congressman George Crockett Jr., member of the Congressional Black Caucus, alumnus of the U of M Law School, and activist in progressive struggles for the past fifty years. Crockett, who was awarded the Nelson Mándela Award for his human rights activities by the Association of African Jurists, was sharp in his criticism of the University's failure to pay tribute to Mándela. He commented that "Mandela's voice has been silenced and his pen has been crushed by laws which threaten imprisonment for anyone who repeats his words or publishes his speech. It is therefore not only ironie, but downright hypocritical that his imprisonment should be seized upon by this university as a justification for refusing to honor him." After the keynote address, Sociology Professor Aldon Morris of the Center for African and Afro-American Studies presented a symbolic honorary degree to Mándela, in absentia. The degree was accepted by Ms. Thabi Nyide of the African National Congress (ANC), a South African exile and activist currently living in Atlanta. In her comments, she urged student activists in this countrv to continue their supportive efforts and to be inspired by Nelson Mandela's principies of courage no surrender. Behind the speaker's podium was a huge banner which, reiterating Nyide's message, read "Amandla, Free South África." In the center of the platform was an empty chair, draped in a ribbon of green, black and gold, the colors of the ANC, with Nelson Mandela's name written on it, and a yellow rose on the seat. This display was intended to symbolize the fact that Mándela was there in spirit, if not in body. At the main commencement ceremony, despite the University's efforts to quiet the issue, the people's desire to honor Mándela was made quite clear. Two thousand "Honor Mándela" stickers were handed out at graduation and were visibly worn by hundreds of graduating seniors and their guests. Even the University's own keynote speaker, U.N. Secretary-General Javier Pérez de Ceullar, saw fit to mention in his speech the situation in South África and the importance of working to free Mándela. Organizers of the alternative ceremony had invited him to at least make mention of the issue in his remarks. Overall, the organizers of the May 3 event considerad it a success. We also look forward to an even more intense and expanded struggle against racism and Apartheid next year, including a revitalized effort to win an honorary degree for Mándela.