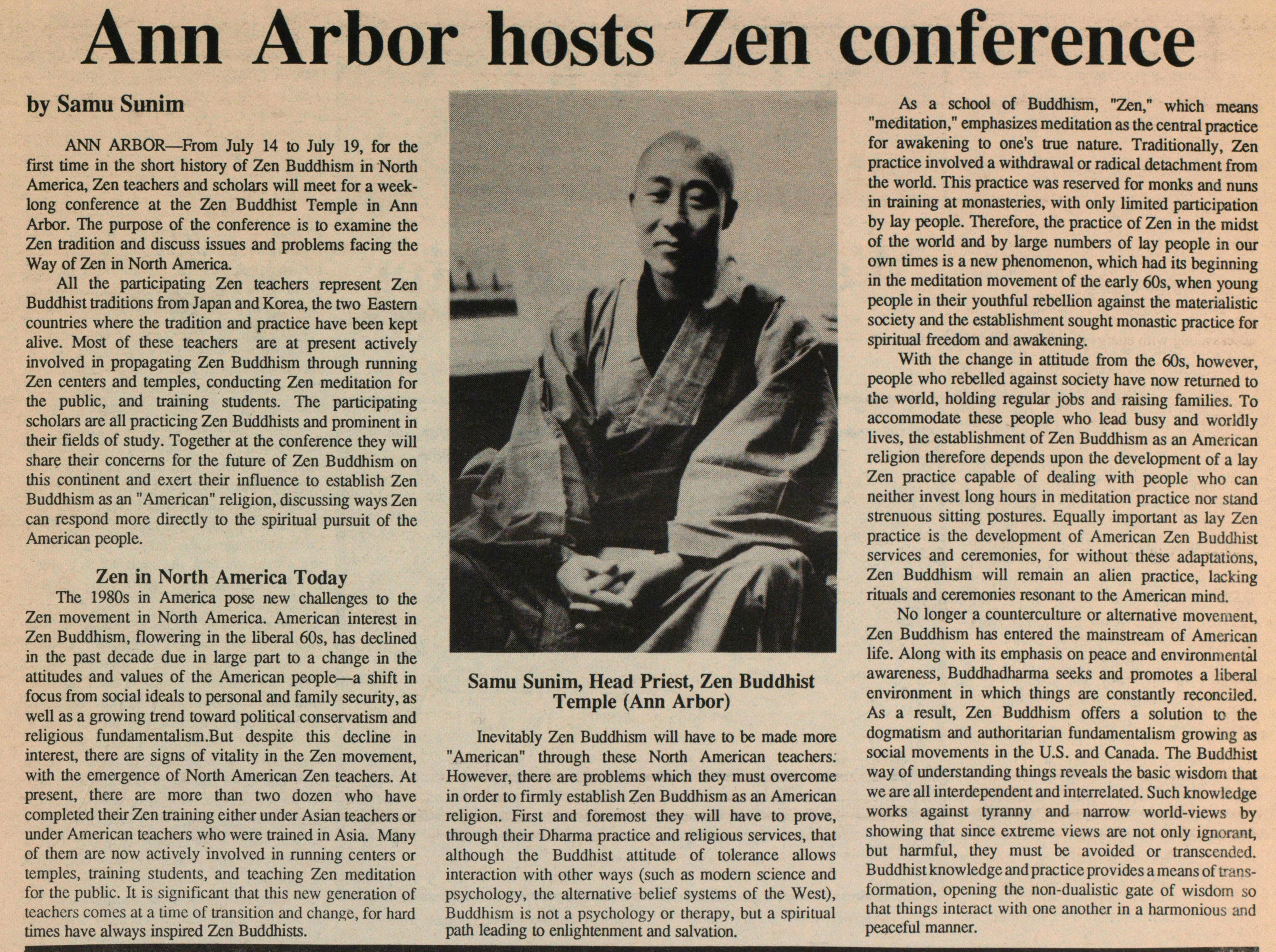 ANN ARBOR- From July 14 to July 19, for the fírst tíme in the short history of Zen Buddhism in North America, Zen teachers and scholars will meet for a weeklong conference at the Zen Buddhist Temple in Ann Arbor. The purpose of the conference is to examine the Zen tradition and discuss issues and problems facing the Way of Zen in North America. All the participating Zen teachers represent Zen Buddhist traditions from Japan and Korea, the two Eastem countries where the tradition and practice have been kept alive. Most of these teachers are at present actively involved in propagating Zen Buddhism through running Zen centers and temples, conducting Zen meditation for the public, and training students. The participating scholars are all practicing Zen Buddhists and prominent in their fields of study. Together at the conference they will share their concerns for the future of Zen Buddhism on this continent and exert their influence to establish Zen Buddhism as an "American" religión, discussing ways Zen can respond more directly to the spiritual pursuit of the American people. Zen n North America Today The 1980s in America pose new challenges to the Zen movement in North America. American interest in Zen Buddhism, flowering in the liberal 60s, has declined in the past decade due in large part to a change in the attitudes and values of the American people - a shift in focus from social ideáis to personal and family security, as well as a growing trend toward political conservatism and religious fundamentalism.But despite this decline in interest, there are signs of vitality in the Zen movement, with the emergence of North American Zen teachers. At present, there are more than two dozen who have completed their Zen training either under Asian teachers or under American teachers who were trained in Asia. Many of them are now actively involved in running centers or temples, training students, and teaching Zen meditation for the public. It is significant that this ncw generation of teachers comes at a time of transition and change, for hard times have always inspired Zen Buddhists. Inevitably Zen Buddhism will have to be made more "American" through these North American teachers. However, there are problems which they must overeóme in order to firmly establish Zen Buddhism as an American religión. First and foremost they will have to prove, through their Dharma practice and religious services, that although the Buddhist attitude of tolerance allows interaction with other ways (such as modern science and psychology, the alternative belief systems of the West), Buddhism is not a psychology or therapy, but a spiritual path leading to enlightenment and salvation. As a school of Buddhism, "Zen," which means "meditation," emphasizes meditation as the central practice for awakening to one's true nature. Traditionally, Zen practice involved a withdrawal or radical detachment from the world. This practice was reserved for monks and nuns in training at monasteries, with only limited participation by lay people. Therefore, the practice of Zen in the midst of the world and by large numbers of lay people in our own times is a new phenomenon, which had its beginning in the meditation movement of the early 60s, when young people in their youthful rebellion against the materialistic society and the establishment sought monastic practice for spiritual freedom and awakening. With the change in attitude from the 60s, however, people who rebelled against society have now returned to the world, holding regular jobs and raising families. To accommodate these people who lead busy and worldly lives, the establishment of Zen Buddhism as an American religión therefore depends upon the development of a lay Zen practice capable of dealing with people who can neither invest long hours in meditation practice nor stand strenuous sitting postures. Equally important as lay Zen practice is the development of American Zen Buddhist services and ceremonies, for without these adaptations, Zen Buddhism will remain an aben practice, lacking rituals and ceremonies resonant to the American mind. No longer a counterculture or alternaüve movement, Zen Buddhism has entered the mainstream of American life. Along with its emphasis on peace and environniental awareness, Buddhadharma seeks and promotes a liberal environment in which things are constantly reconciled. As a result, Zen Buddhism offers a soluü'on to the dogmatism and authoritarian fundamentalism growing as social movements in the U.S. and Canada. The Buddhist way of understanding things reveáis the basic wisdom that we are all interdependent and interrelated. Such knowledge works against tyranny and narrow world-views by showing that since extreme views are not only ignorant, but harmful, they must be avoided or transcended. Buddhist knowledge and practice provides a means of transformation, opening the non-dualistic gate of wisdom so that things interact with one another in a harmonious and peaceful manner.